Hamilton on pole; Vettel on front row in Australia

The winter is over. Spring is here and the Formula 1 season has begun. It all culminated in qualifying for the season-opening race in Melbourne Australia where Williams F1 rookie driver, Lance Stroll, immediately suffered a gearbox change grid penalty after a crash during Free Practice 3. The session started for Sauber without their main driver, Pascal Werhlein, as he was deemed unfit to race due to a 9-month-old back injury he sustained while competing in the Race of Champions.

Pole position was secured by Lewis Hamilton by but unlike seasons past, it was not by the normal 1.5s rather by a mere .268s which means that Ferrari have made progress over the winter and seemingly have closed the gap to Mercedes.

Also nice to see all those cars run on Ultra-soft tires and yet at the end of the session, there were no massive marble gardens on the outsides of the turns.

Q1
The first session started with some animated action in the Red Bull garage as team members worked on the cars as the lights went green. Williams were still working on Stroll’s car as well trying to get it ready for a run in Q1.

Ferrari were out early and Kimi Raikkonen was on a flyer but ran wide and aborted the first run. Valtterin Bottas took the early lead with a 1:24.5 and his teammate, Lewis Hamilton, with a 1:24.53s.

Early running had Mercedes a half second faster than any other team in just sector one. With six minutes left in Q1, Hamilton took the top of the time sheet with a 1:24.191 and his teammate, Bottas, was three tenths off his pace with Ferrari’s Sebastian Vettel just over a second slower. Ferrari were on Super-soft tires with Mercedes on Ultra-softs.

One of the success stories from Q1 was the performance of McLaren’s Fernando Alonso who managed to get his car into 12th for Q1.

Giovinazzi, Magnussen, Vandoorne, Stroll and Palmer were eliminated in Q1. Quite a disparity between Renault’s Jolyon Palmer, who was in 20th and his teammate, Nico Hulkenberg, who finished Q1 in 5th. 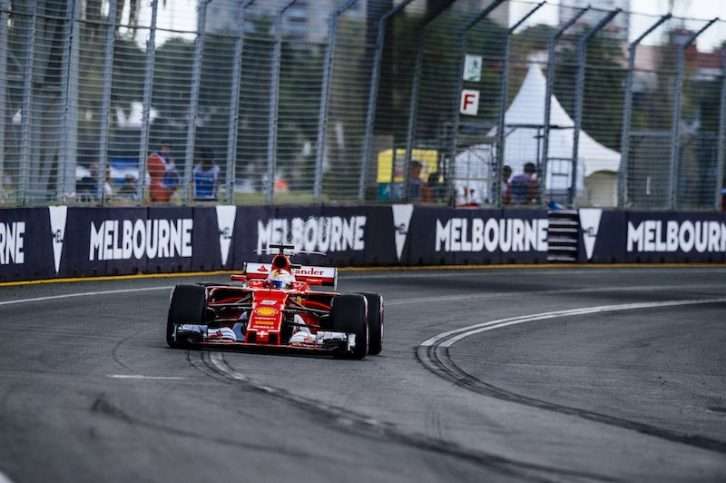 Q2
As the session started, the threat of rain was seemingly more real as the sun dipped behind clouds and the ambient light began to darken. Bottas set the marker with a 1:23.215 on Ultra-soft tires.

All cars on Ultra-soft tires and Alonso radioed that he had a loss of power after riding the curbs which does play into the narrative that the Honda is having trouble in vibration. Kudos to Haas F1’s Romain Grosjean for getting through to Q3.

While the Q1 session seemed to suggest that both Force India cars were quick, they failed to make it into Q3. Perez, Hulkenberg, Alonso, Ocon and Ericsson failed to advance to Q3.

As the session resumed, the sun resumed as well with a break in the clouds and just 7:30 minutes left in the Q3. While Grosjean came ou when the light turned green, the rest of the teams waited to make one final attempt for pole.

While Bottas was setting purple secotrs, Hamilton, behind, swept up the after him trading purple sectors. Hamilton beat Bottas by nearly three tenths. Vettel joined Hamilton on the front row besting Bottas. 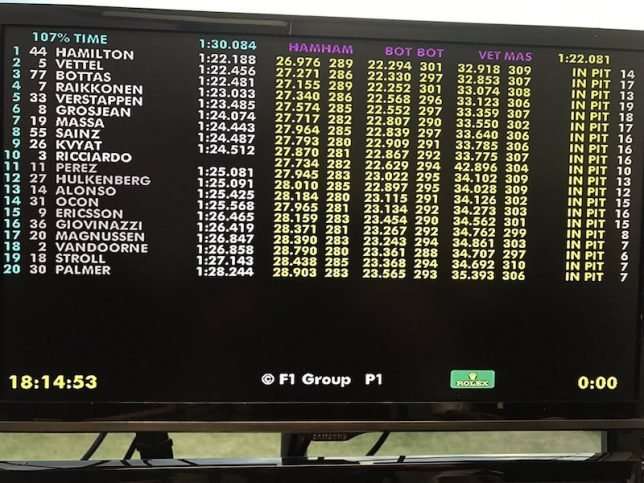 Good grief Todd, you must never sleep. You must be delighted to see that Ericsson got it to Q2, though they had to remind Giovinazzi of who not to ‘eff with’ late in his last lap to make sure of that :-) Great quali, bad luck for Ricciardo backing into the tyres at turn 14, when these new cars let go, there’s no coming back. Ferrari are up there with Mercedes, but 3 tenths off in ultimate pace is still a big margin to catch up. Great work by BigJohn to get up to 6th. Still driving through the brake… Read more »

I sleep very little. :) This website is going to be the death of me. :)

I certainly hope not!
Let’s think of you more like Bernie, eternally vigilant over the world of F1 (How’s that for a new F1B tagline?) :-)

Thanks it does help. as I thought it was the famous “spirit” of St. Louis which prompted me to inspect “a pride of place” on one of my shelves in my workshop.

Small islands of F1 fans, half a world apart, but united by the decorum and civility of F1B :-)
It’s a fantastic thing that Todd has created.

I cannot as yet confirm this, but one commentator was saying that he was confused that number 44 used at least 6 laps old tyres to set his best time on in Q2, as he must now start the race on those tyres.

Saw that too. Apparently the FOM video broadcast had a mistake for most if not all of Q2, but later corrected; they were new when he started his only Q2 lap.

Thanks for the information, as I said, I could not double check it.

On the Sky coverage they said it had been ‘a bar code error’ that lead to the graphic indicating that Hamilton did Q2 on used Ultra soft tyres.
However, like all the rest he will be starting the race on used Ultra soft tyres, so there will be a rash of pit stops in the first 5 to 15 laps, which could make things interesting, especially as we don’t know how long the supersofts will last in a race.

Also glad for the correction, because I like the commentators on NBCSN Steve Matchett and David Hobbs, were wondering why Lewis was starting on a set of used ultra’s during Q2.

Qualy was great, it’s good to see Mercedes may have some legitimate competition this year. I do wish Red Bull were a bit faster. My favorite graphic from testing pretty much sums up McLaren, sorry Grace!

I agree quali was exciting, practice too. And McLaren made it through without a p.u failure. Let’s hope Honda can do the same turn around that Renault achieved in 2014, where they went from grenade p.u’s in testing to podiums in the first race. Dreams are free! (Honda dreams less so)

Aussie GP 2017, Skysports 90 mins of pre-race show, and one nugget of information so far. Pat Symonds explaining why he thinks the cars are unrecoverable once their angle of oversteer exceeds a small angle. Todd will be happy to hear, its the sharkfin! As a car starts to slide, the direction of the car starts to deviate from the direction of the airflow. Initially that adds air pressure on the side of the sharkfin which is into the air, helping to straighten the car. But, if the angle of travel of the car to the air flow becomes too… Read more »

Aussie GP 2017 (Spoiler alert), its all happened down here, if it hasn’t happened in your country, look away! That was interesting, apart from the ‘overcut’ not very exciting. Delighted to see Vettel take the win, and very sad that Riciardo’s race day turned out so poorly. It’s a worry that Raikonnen couldn’t run the two Mercedes closer, he was lucky to hold 4th against a hard charging Verstappen. Where’s his testing and FP pace gone? Lots of room for conspiracy theories over the Mercedes tactics, Bottas catching Hamilton like a train, then suddenly holding station, hummm. I was looking… Read more »