The Baku Grand Prix circuit was perhaps best described by Toro Rosso’s Daniil Kvyat when he said that it has a Monaco section and a Monza section. The tricky beast of Azerbaijan put the drivers to the test as Pirelli’s tires were difficult to get in the operating window and this left drivers out on track for multiple laps to get the best shot at pole position.

There’s a part of me that really liked the result of harder compounds on compliant circuit and it reminded me of the old days when the track action was continuous during qualifying instead of formulaic with a run, pit and final run.

A red flag in Q3 meant a stop in action and just three minutes for all the top 10 drivers to go for pole but it was Lewis Hamilton who took the top grid slot for Sunday’s race in a terrific qualifying attempt just ahead of his teammate, Valtteri Bottas and Ferrari’s Sebastian Vettel.

Described as one of his best laps this season, Lewis was happy with it but Bottas was not happy with his lap and struggled with tire temperatures.

Ultimately it all came down to getting the tires switched on and the teams are struggling to find the switch. The number of yellow flags all weekend could be an indicator of the kind of race Sunday offers with many drivers running long into the run-off areas and the track workers taking time to remove stricken cars so anything can happen in race day and team strategy will play a large roll. 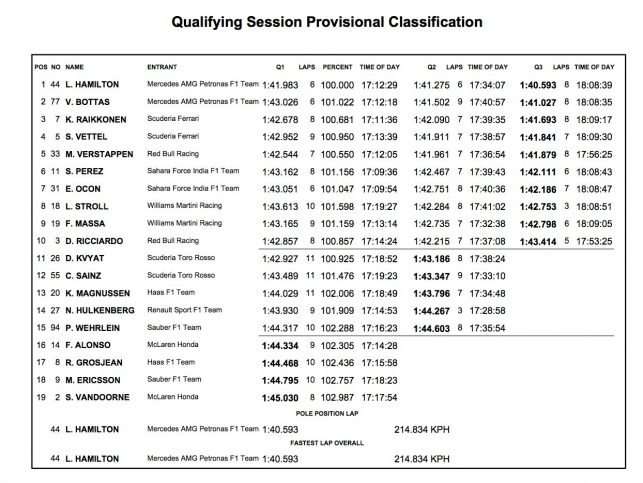 Great pole from Lewis. I think the race will be tricky for him tomorrow

I think that Lewis having half the poles so far in a season where Ferrari and Mercedes are pretty close really speaks to his hot lap abilities.

Lots of interesting things in the FP3 and Quali sessions. It’s obviously a very tricky circuit, and with these massively torquey super efficient hybrid p.u’s, on hard tyres the challenge for the drivers is extreme. Amazing work by Mercedes and Ferrari to get their cars dialed in ahead of the Red Bulls, that wasn’t looking likely earlier in the weekend. Kudos to Stroll, he ran strongly all practice, no major mistakes, and out qualified Massa. Actually Kudos to Massa who was really hustling the Williams too. Happiness for Force ‘insert name here’, both cars in Q3, though that is partly… Read more »