As qualifying began for Sunday’s Japanese Grand Prix, it did so with looming grid-space penalties for Valtteri Bottas, Carlos Sainz, Jolyon Palmer, Kimi Raikkonen and a whopping 35-space grid penalty for Fernando Alonso. Hard to get excited about a qualifying session when you know you starting 35 spaces back in a 20-car field.

Free Practice 3 didn’t help matter with a crash from Raikkonen damaging his gearbox and forcing the change and subsequent grid penalty. Bottas also clouted the wall.

The circuit was dry after some serious rain earlier in the weekend as the cars took to the track for Q1. I am curious about the need for gearbox changes when hitting the wall or even the concern about needing to change it for Vettel after hitting Lance Stroll last weekend in Malaysia. We didn’t use to hear about the gearbox changes in the past but it is possibly a testament to how tightly the drivetrain in these cars are packed.

Bottas had another moment at Spoon curve on his first run but no damage to his car while Lewis Hamilton set a 1:29.507 in his Mercedes and Sebastian Vettel was 2/10’s off in his Ferrari for the first run. When Bottas managed to keep his run going and slotted just behind Hamilton at 0.007 of a second.

Raikkonen managed to slot 6th on his first run after a frantic effort to get his car repaired for qualifying while the Red Bull of Max Verstappen leapt to the top of the time sheet on his first run with a 1:29.181.

The intriguing part is that both Vettel and Hamilton set their initial times on the harder compound tire (soft) instead of the softer option (super soft). Raikkonen made another run on supersoft tires and managed to slot second just behind Hamilton.

With nearly one minute left, Hass F1’s Romain Grosjean crashed heavily and red flagged the session. A second crash in as many weeks for Grosjean can’t be endearing himself with the team and the look on Gunther Steiner and Gene Haas’s face was not good. While the Malaysia incident was not Romain’s fault, he blamed massive oversteer on the incident and said something was wrong with the car.

Grosjean, Gasly, Stroll, Ericsson and Wehrlein were knocked out in Q1.

Both Red Bulls looked very good in the esses and with both Raikkonen and Bottas facing grid penalties, the team had to be thinking they may have a real shot in Japan.

Both Renault’s were considerably off the pace on thir first runs and they set out for the final run to see if Palmer could, for once, beat his teammate Hulkenberg in qualifying as it was 15-0 on qualifying results.

Out in Q2 was Sainz, Palmer, Magnussen, Hulkenberg, and Vandoorne with Lewis on top of the time sheets.

Lewis Hamilton has held pole position on every track on the calendar except this one, the mighty Suzuka circuit. His mission in Q3 was clear—pole position. Vettels’ mission was pole or at least right behind Hamilton with a competitive pace. The Red Bull team was looking for a bobble, a mistake ahead of them but as Q3 started, the team looked very competitive.

Hamilton pipped his teammate on his first run to yet another lap record of 1:27.345 and was 2/10’s faster than his teammate in every sector. Vettel took second 0.452s off the pace of Hamilton. Raikkonen’s first run saw him run wide at Degner like so many other drivers this weekend. While 130R may have been neutered, Degner is the real challenge now.

The final runs began with supersoft tires and Lewis leading the pack. His final attempt improved his time slightly to 1:27.319s. Ricciardo leapt ahead of teammate Verstappen and Vettel came in third but will inherit second from Bottas who has a grid penalty.

Your top three. Hamilton’s 10th pole of the season and first at Suzuka. 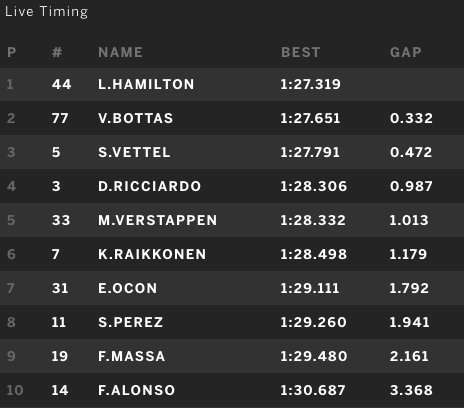 Great lap by Lewis, got the pole there at last. I’m still not confident he can win tomorrow, hope so, but I think Seb might nick it. If he does hope, Lewis comes no lower than second.

I’m surprised to see Lewis so quick in Qualifying… looks like Lewis is on top again this weekend and with a 1-2 Merc appear to be back to their old ways ;p
Turn one will be interesting. Seb needs to probably excercise a little more restraint then Lewis as he needs to make up points. Lewis may be happy with no points as long as Seb gets none also. I’m not saying he would do it intentionally, it’s just a scenario he must be aware of.
Might have to bite the bullet and watch this one live!

Lewis did say Friday that given their pace in FP1, he felt they had made the right setup changes and resolved some of the issues they had in Malaysia. Looks like he was right. Even though we had some F1 sage troll telling me that I was an idiot for posting something about Merc being back on top. Seems like you can actually judge things by FP1, 2 &3…especially when you are a team with 50 engineers looking at massive data streams from each car. What do I know, though, right? I’m an idiot for thinking that a 2/10th delta… Read more »

It was a great lap for sure. Loved the onboard camera shot of it too. Car is hooked up and Even Valtteri looked to be getting some of his pace back, albeit 3/10ths off Lewis for pole but still, he struggled quite a bit in Malaysia so good to see him back even if he had a couple of “moments” on track.

I also think it is interesting how over the last several years that Degner has become the key corner for the drivers. It used to be the 130R but Degner looks like a real handful these days.

I am so sick of all these grid penalties. I get it, it’s part of the rules, but these grid penalties are stupid . . . there, I said it . . . stupid! Penalizing a driver for an engine component failure is just rediculous. And, more important, it robs us as fans from seeing the fastest drivers compete with each other at the sharp end of the grid. Please . . . enough already.

LOL… Yep! I believe they should be penalizing the teams vs the drivers. The drivers have nothing to do with the failure. My idea would be to drop the driver and grid penalties and only penalize the constructors points. Fans are no longer confused at who is starting where, drivers aren’t penalized for something that the constructor has full control over.

This part of the season is great, two races in a row in the NZ daytime!
Hamilton is certainly really impressive in qualifying just about everywhere this year.
It has been a pretty challenging weekend for the teams so far, with a soggy FP1, FP2 pretty much rained off, then the damp track leading to crashes in FP3.
Mercedes and Ferrari did well to repair the Bottas and Raikkonen in time for Quali. Those Ferrari mechanics have been putting in big hours these last two weekends.

Isn’t it good that McLaren Honda once again made Q3? 10th and 11th in qualifying, and close on pace with the Mercedes powered mid field runners (F.I and Williams).
The Grid penalties for Alonso are a pain, but at least they’re making progress.

And Alonso has got to be thinking… Nooo, not again… what have I done! (meaning the switch to Renault next year)

I also like that we are starting to see other teams in the mix. It’s just too bad we have 2 more years of this and things change again in 2020.

Maybe it’s all the Mclaren chassis……after all the difference between RBR and Renault is the chassis.
I think the last two years of the current hybrids could be good if the decision was made to allow the teams 5 p.u’s per year. It looks like they have the reliability that that level of allocation would mean few grid penalties, and maybe closer racing through the field (provided Mercedes p.u development has peaked).