Qualifying started off rough for Renault’s Jolyon Palmer as he needed a new chassis and therefore sat out of the session. The weather was cool on Friday and manageable on Saturday and this left teams working to determine the best compound for race strategy .

Friday’s practice session saw a Mercedes and a Ferrari top the time sheets in what was a bit of an interesting affair. Rumors of Mercedes running conservative engine settings suggested that they could be within reach this weekend and Sebastian Vettel added gravity to those rumors but all that was compounded with Red Bull’s Max Verstappen drew blood on Saturday’s final practice session by leading both Ferrari and Mercedes.

Regardless, heading in to qualifying, you would have to be slightly touched to discount the Mercedes duo of Ncio Rosberg and Lewis Hamilton, the former leading the latter by 26 points in the championship. The warmer temps on Saturday and being the highest elevation race on the calendar could help or hurt certain teams. The track temp at the time of Qualifying was considerably higher than it had been on Friday.

As for Merc engines, Rosberg was on the second race of a new engine (his 5th of the season) while Hamilton was on his third race on his engine.

The session started with both Ferrari’s taking the top times but then they were split by the Red Bull of Daniel Ricciardo leaving one to wonder if the two teams were effectively there or thereabouts with each other. The challenge was the thwarted by Lewis Hamilton who took top time with a very fast middles sector and his teammate was still anguishing in 6th.

Ocon, Nasr, Grosjean, Gutierrez and Kvyat all out of Q1. Maor’s Pascal Werhlein threw down a great lap and clawed his way into Q2 for the fourth time this year and overshadowing the much more vaunted teammate, Ocon. Both Haas cars were out in Q1 and that had to sting for hometown hero Esteban Gutierrez.

If you’re keeping score between Ericsson and Nasr, the Swede out performed his teammate and you have to wonder which, if either, of the drivers Force India might be more interested in. You also have to wonder what Paul is thinking in regards to our FBC battle between the Sewed and Nasr. ;)

Rumors suggested that Mercedes would turn the wick up on Q2 and start to run the engines a little harder. Merc’s Hamilton came out early on the soft compound. So did Williams, Ferrari and Force India. Red Bull came out on the super soft compounds and tried to take a different strategy to Mercedes to keep them frosty.

Things heated up when Lewis Hamitlon’s first lap was blocked by Sebastian Vettel who then got a tow off of the 2015 champion down the front straight to start his hot lap. Regardless, Hamilton led the time on his first lap until Red Bull’s Max Verstappen broke the 1:19 time with a 1:18.972. Mercedes driver Nico Rosberg was down in 5th at seven tenths off the leading time of Verstappen. He’d been struggling in the first session and it was clear that this was going to be an issue in Q3 if he has this many cars between him and Hamilton for the start of the race. Again, there is the possibility that they have not turned his engine up and are just trying to get him through to Q3.

Ferrari’s Kimi Raikkonen came out with four minutes left in the session on super soft tires and as the teams must start on the compounds they set their Q2 fastest lap on, it leads you to believe that Kimi will go on a super soft strategy to his teammate’s soft strategy.

Alonso, Ericsson, Wehrlein, Magnussen and Sergio Perez were out in Q2 and that was a huge blow for the local crowd in Mexico. Given Perez’s recent performance, his lockup at turn one ruined his chances of advancing and that has to be a shock to the massive local crowd with both Mexican drivers out.

The teams came out on the super soft tires and it the focus was on Hamilton and Rosberg as well as Red Bull and Ferrari. The first runs put Lewis on top with a 1:18.704 and Rosberg back in 4th just over a half second off his teammate’s pace and two Red Bulls in front of him which does not bode well for his championship run.

In the end, Lewis Hamilton took pole but his struggling teammate managed to keep both Red Bulls behind him and slotted in second with Max Verstappen in third. Kimi Raikkonen had an engine issue and his teammate, Sebastian Vettel couldn’t manage a better time. 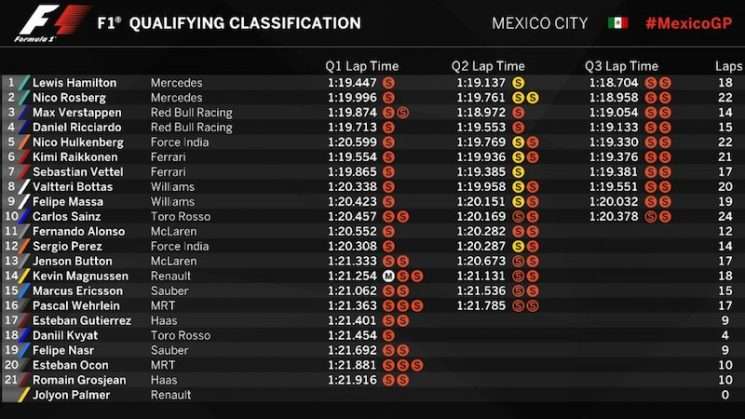 I didn’t think Raikkonen went faster on the super soft in Q2, so will start the race on the soft.
With such a long run to the first corner and a slippery track, Red Bull could leapfrog both Mercedes off the start, that would certainly make the race interesting.