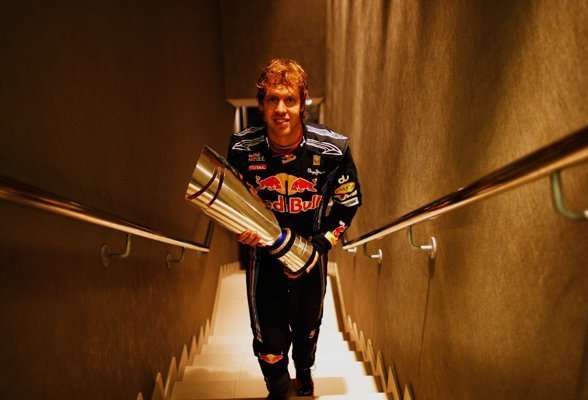 “Sooner or later, he will be driving a red car.”

That’s the gist of a story at Germany’s Express paper. The speaker? Ferrari president Luca di Montezemolo. The “he”? Sebastian Vettel, of course.

It’s a story that only could happen during the down time of the holidays, as even the Express — which seems to be claiming it essentially “broke” this rumor two years ago — points out that Vettel and Red Bull have a “water tight” contract through 2012.

But that’s just perfect, as Ferrari’s real desire is for Vettel to be the eventual replacement for Fernando Alonso. (C’mon. Whose name do you think is first on the list of that Alonso Clause in the file cabinet in Maranello?)

The Express pulls together some old Vettel “waxing poetic” quotes about wanting to go to Ferrari one day, but then also quotes Red Bull boss Dietrich Mateschitz in what I think is really the interesting part of the story. His comment? Essentially: “We are making leaving Red Bull as difficult as possible for him.”

And there’s our real point. If Vettel in 2013 or even 2015 has another two, heck maybe three titles, and just for fun let’s say Alonso captured one and maybe Lewis Hamilton his second, depending on how many years we’re talking. But clearly through the years Red Bull has been providing Vettel a car capable of winning it all… would Vettel still feel that notorious pull toward Maranello? Would there be something about winning it all in a Ferrari that could compel him to abandon the great situation he has?

That’s what we’ll be talking about a few years from now. (And, if you want, you could add Mercedes into that mix if it has insert itself into the championship picture I painted above.)

Of course, it all could just mean that Montezemolo knows that Red Bull plans to switch to a red-dominated color scheme on its cars.

Previous articleThink Schumacher stunk in 2010? Yeah, he pretty much does too
Next articleIndycar vs. F1: A tale of two engines