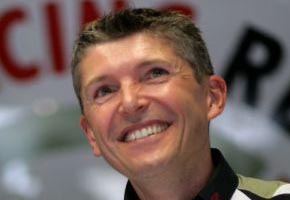 Outgoing Honda CEO, Mr. Fukui, says that things are not looking very good for the Brackley-based F1 team as no serious buyer has been identified.

“There are various offers for the team but we have not seen any serious buyer yet,” Fukui was quoted as saying by Reuters. “We find the sale process difficult.”

What constitutes a ‘various offer’ from a ‘serious buyer’? It was my understanding that Honda would be willing to part with the operation for mere pennies if they could find a buyer willing to take on the operation going forward. Perhaps all of these ‘various’ offers have included some sort of continued involvement for Honda and they want no part of it. Or perhaps they feel that the ‘various’ offers have not proven to the board of Honda that they can carry the expenses going forward.

All of this comes on the heels of Bernie Ecclestone’s comments that he offered them over $100 million to work a management buy out deal with Ross and Nick retaining 16-17% ownership. He said they rejected it in favor of something else. We have no idea what ‘other’ attachments (and there were bound to me some serious ones considering the source) there were to the Ecclestone deal but right now, Nick Fry looks like an absolute chump and hindrance tot the sale of BBF1.

That may not be the case but as far as the Ecclestone and Honda quotes to the media go, Fry looks like he will single-handedly scuttle the jobs of hundreds of people at BBF1 and the entire future of BBF1 over what, seemingly given press stories, is greed and a serious conflict of interest. Most people would think, “wow, Bernie would give BBF1 $100+ million and let Nick and Ross retain some ownership and Nick said no?”. This would only lead to Honda moth-balling the project leaving all the employees without a job and Bernie without 20 cars on the grid.

At some level you have to give Nick some credit that he does care about the employees and BBF1 so the details are scarce and the perception is that Nick has lost his marbles. I think Nick should ahve a press conference and set the record straight because any potential investors are reading the same stories we are and those reflect poorly on his leadership and willingness to get a deal done favoring the collective operation over his own backside. I can imagine that Bernie’s offer is nothing short of doing a deal with the devil given the onerous nature of his complete bid but in the end game, is it better to own 17% and save the jobs of several employees or look for a sweeter ownership deal for you and Ross? That is a moral dilemma that Nick has to ask himself and be willing to explain to the several hundred who rely on BBF1 to place bread on their table. As with any limited asset acquisition, all things are on the table and everything is an option. Nick should counter Bernie’s offer in an attempt to de-fang it and get the best deal he can. Obviously Bernie has the upper hand of time and cash where Nick has neither. Those things are serious motivations for pride, greed and humility to fly out the window. It is about integrity, in my opinion, and if Nick feels that closing the doors is the right thing to do based upon the compromises in Bernie’s offer, then that’s his answer and he’ll have to leave with that.