Formula 1 has changed. Some like it and some do not. For some, F1 owes nothing to the environment, as its overall footprint is minuscule to the complex nature of pollution from emerging cultures and air travel while others feel that doing nothing is simply endorsing gross excess and irrational stewardship of the resources before us.

Ideology has galvanized the issue and “science” is being used to bolster either side of the argument. Arguments have ranged from “nothing to see here folks” to “we’re all going to die this year” and while the warnings of the immediate need to find alternative energies in order to save lives is well trodden, I discovered that the search for those alternative energy methods actually does save lives—just not in the ways you might think.

Putting ideology and science aside, there is absolutely no one that I’ve spoken with who thinks being good stewards of the resources we’ve been given is a bad idea. To those ends, I was very keen to take Shell up on their offer to go to Houston and see, first hand, what their Eco-Marathon was all about.

Shell Eco-marathon is an racing annual event held in three regions throughout the world: Asia, the Americas and Europe (in calendar order).

There are two vehicle categories:

Prototype – futuristic, streamlined vehicles, where the primary design consideration is to reduce

specifications suited to the needs of today’s drivers

There are six different energy types:

While all of this sounds interesting and challenging, the road to getting to the Eco-marathon is perhaps the hardest part of the contest. Sure, there are rules and regulations and if you’re from the University of Illinois, maybe getting the right team and enough shop time could be a hiccup but that’s not what I’m talking about. The big schools have very polished young professionals who have resources to travel, create, build and compete.

What I’m referring to are the small or disadvantaged districts and seemingly impossible tasks of getting to Houston let alone designing and building a car. It must be said that the mentors and educators that have sacrificed so much to get these kids to the show are pillars of strength and commitment. 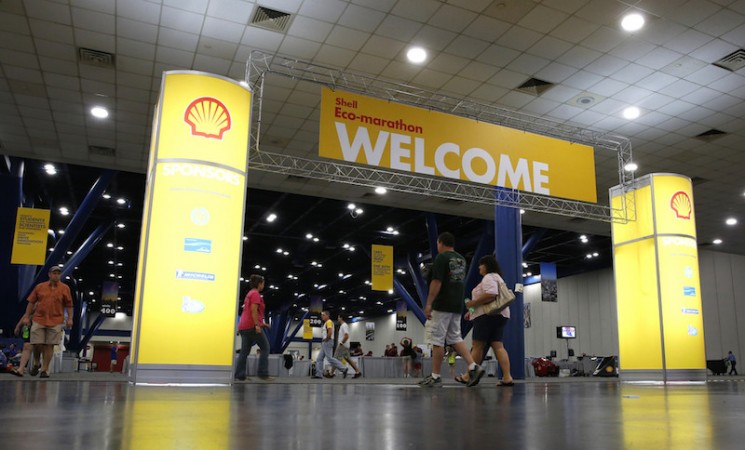 If you want to know who these kids are and what it’s like preparing and simply getting to the Eco-Marathon, check out this video series to find out what you do when your entire university is under water in a flood. You’ll be surprised to see the levels of professionalism and commitment these teams display. There are real engineering approaches such as component teams and organization that you would find in F1.

I wanted to get a feel for the teams and who they are so I decided to walk the paddock and just poke around a bit. I wanted to see if these teens and 20-somethings were here to race, engineer or champion a cause.

Let’s just make our own engine shall we?

Bumbling into the University of Toronto’s garage, I discovered an incredibly polished and efficient team in possession of all their faculties and a righteous set of tools. 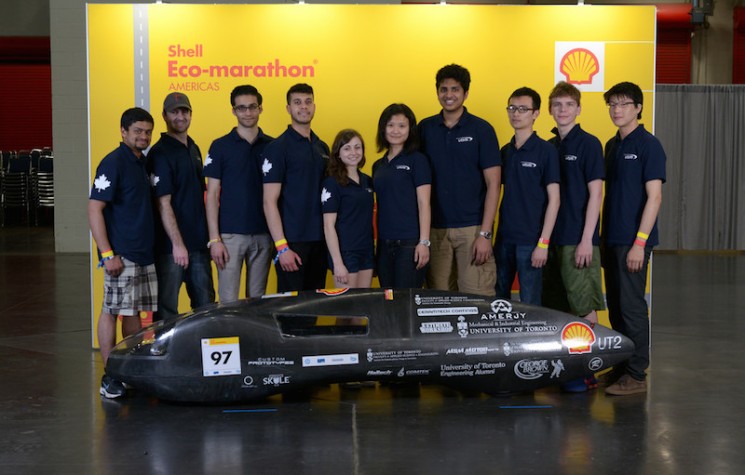 They have a very cool, sleek car but what astounded me was the story Jonathan Hamway told about simply designing their own engine…from scratch. The materials, design and approach were elegant, exotic and far beyond the Haynes Internal Combustion Engine Model Kit that I so proudly assembled as a youngster.

Hydrogen? Yeah it’s safe in our car but not yours

I then visited Neil Macfarland of Swarthmore College and he was explaining why they chose to use hydrogen in their car. Yes, he was converting hydrogen to power on demand to shove his car in the Eco-Marathon and that little contraption cost around $10,000. 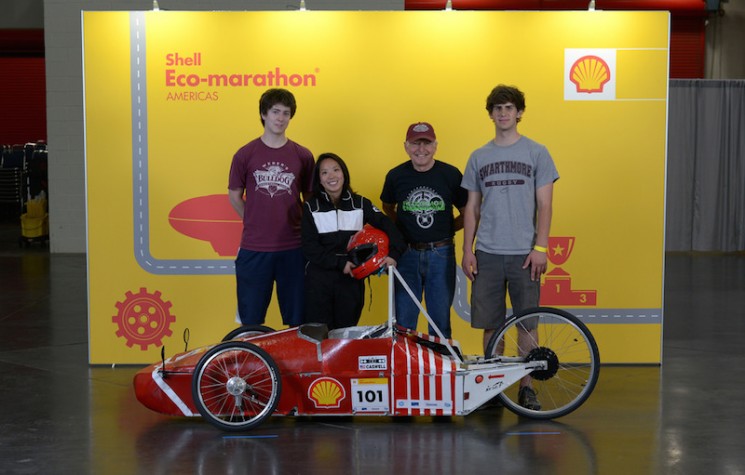 I started asking Neil about the safety and reality of this idea in our road cars and he gave that grin and knowing glance—the kind you get when someone knows you know the answer as well as he does—and said, well we would need a lot more hydrogen than this little container and that wouldn’t be too safe would it…nod, nod, wink, wink. Uh yeah, Neil, that’s just what I was going to say dude. Very sharp young man speaking to a real dullard and he didn’t even betray the fact that he knew that as well as I did. I left with my college life in PR/Advertising flashing before my eyes.

I was looking for something to do after school

Walking the paddock, I happened upon a team in green T-shirts. They were diligently working away and one of them wore a red Nomex racing suit. It took me about 30 seconds to realize that every team member was female. That’s right, the first and only all-girl team at the Eco-Marathon.

They call themselves The Shop Girls and they are from Granite Falls High School in the state of Washington. For Teagan Fife, 2014 represented her second year in the Eco-Marathon and she’s a veteran with a clear understanding of what to expect as well as a very competent mouthpiece for the team. She gets the plot, knows the drill and knows how to drill. 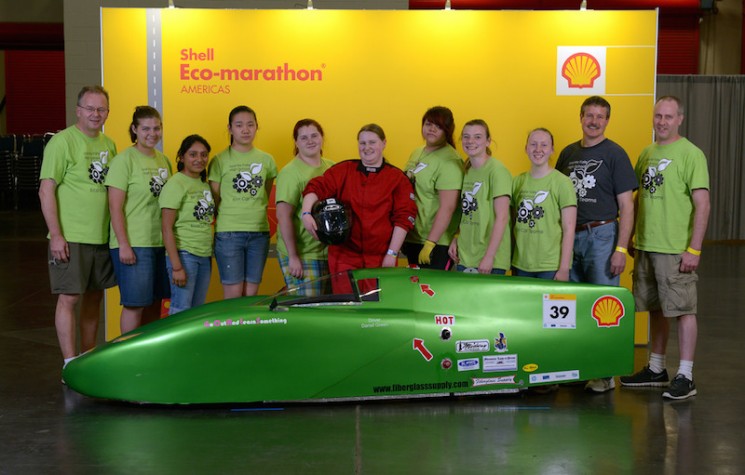 As Teagan waxed elegantly about her reasons for being in the Shell Eco-Marathon, her teammate, Jocelyn Gimple, was brutally honest and equally charming—she joined because she was looking for something to do after school. I asked questions about the program and they knew every detail. They are not a novelty; they are a group of women who are passionate about engineering and one woman in particular.

There was a girl who was struggling with school and had decided to drop out in her sophomore year. The director of the Granite Falls Eco-Marathon project convinced her to join the team and at least try it before leaving school for good. She did.

She became the team leader for two years and is now attending college for an engineering degree. A life, figuratively if not literally saved through a program intended to exploit alternative energy and development. I discovered the Shell Eco-Marathon is littered with stories just like this one from North America to Europe and Asia. Kids who are in the most dire of situations reversing their fortunes through the challenge to learn. Simply incredible!

What’s up with those darn Canadians?

There is a juggernaut in the mix and that is the lovely nation of Canada. There were 11 teams from Canada and the Université Laval has dominated the Eco-Marathon for several years until 2013 when their car wouldn’t start. They came back to regain their pride in 2014 and won with a whopping 2,824mpg (miles per gallon). The University of Toronto came in second with 2,712mpg. 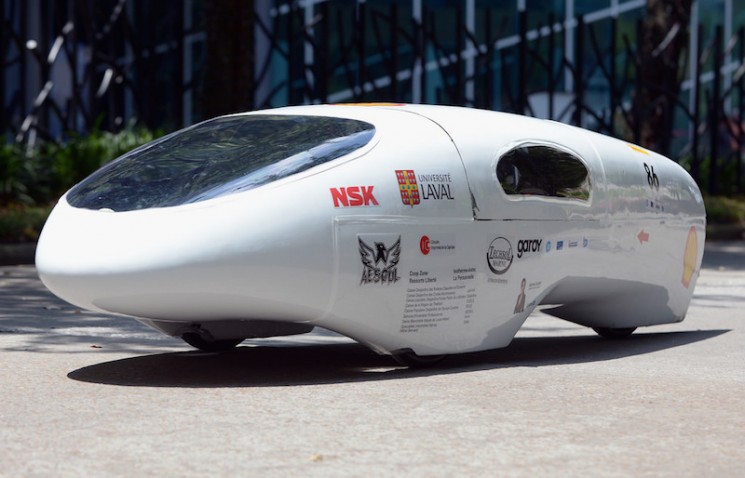 Teams have achieved close to 8,000mpg before so the targets are big and the challenge is enormous—so is the pressure. For the UrbanConcept, Mater Dei high School won with 901.48mpg with the diesel-powered team of Sullivan high School going 1,899.32mpg.

Yeah, I wanted to know where the actual racing element of the weekend fell and I was stunned to find that all this talk of alternate energy, car construction, STEM, engineering systems and resources didn’t overshadow the very concept that these young people are here to race! 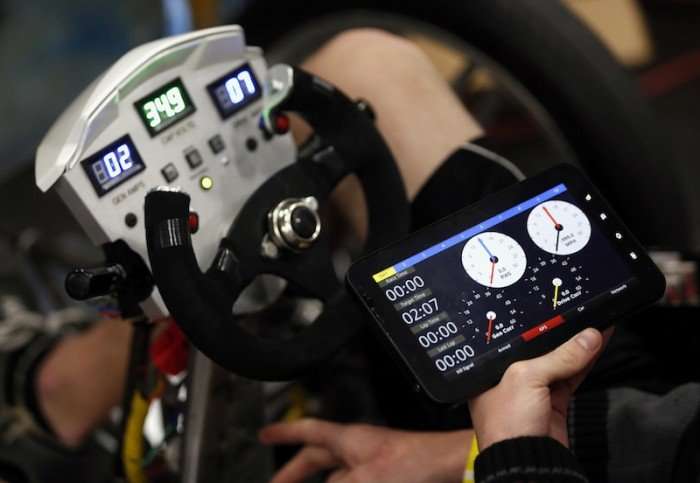 I watched as one young man immediately plugged his laptop into a car as it came in for it’s Friday Practice run—just like F1’s FP1 session if you will- and started looking at air/fuel mixture rates, timing and more. I asked him what he was looking at and he spoke of the aggregate time they needed to win. They have created an entire race strategy including lift-and-coast and braking points, tire pressures, minuscule contact patches and drag.

He relayed the concept of drafting and how the CFD had been really close on this race car as well as how their race strategy simulation was almost spot on. You could say that they get the plot and they are here to race!

As I walked the paddock and looked at 126 teams from 36 high schools, 48 universities and 5 countries, I was seeing incredible thinking, innovation and yet a completely organic approach to the projects. Sure, some were carbon fiber but other cars were wood and plastic. There were Weller soldering irons, spools of 22ga. wire and saws. Students were tired and working around the clock to get their cars ready for the race and yet there was a passion burning in their eyes. It wasn’t a passion for solar power, gasoline or carbon. It was a passion for learning and overcoming the challenge that they had before them. 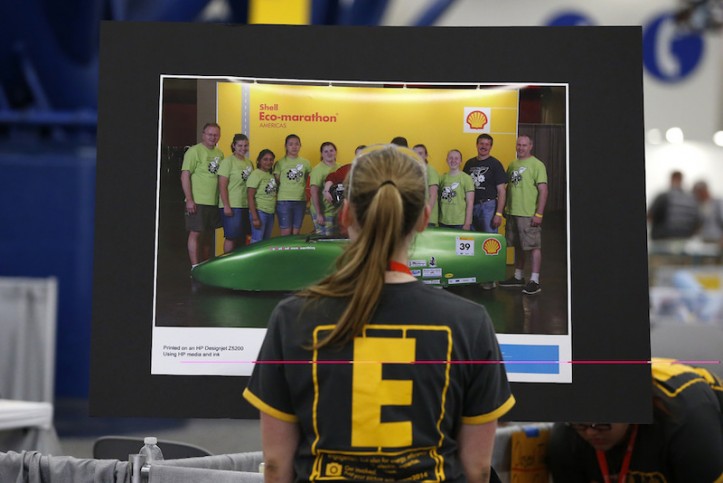 As I prepared to leave, I met a team from a very modest school district. Their UrbanConcept had a child’s booster seat, a used law chair and parts from oddly recognizable products that betray their origin through redeployment and repurpose that created a complete non sequitur. It was nothing short of amazing and these young men were from economically depressed neighborhoods but they were intellectual millionaires! I encouraged them to never give up and to keep the focus on practical skills, divergent intelligence and grit.

One of the young men told me that he got into the program because he’d been interested in the car mechanic program at school. He liked cars. It would not shock me if the young man attends college for engineering and that is the real genius of the Shell Eco-Marathon.

Creating, challenging and sponsoring young minds to learn, think, and innovate. Sure, Shell has a role to play and fostering the next generation of engineers to think about energy resources in new and exciting ways is the goal. A noble cause by anyone’s measure but I found the human element to be the most moving and soul-stirring part of the weekend. This quest for alternative energy is truly saving lives for some of these students and giving hope and opportunity to many who would otherwise  have either. 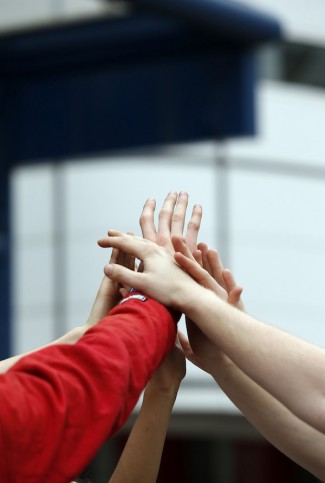