Over the past three seasons we have become used to the Kinetic Energy Recovery System, allowing drivers the choice of when they used the additional 6.7 seconds of power from the 60kW (80.5 bhp) motor generator unit.  We have seen some drivers using this boost strategically to fend off attempted DRS passes, or to successfully pass drivers in unexpected places.

For next season this changes dramatically.  There are two motor generator units, a 120kW (161 bhp) Motor Generator Unit – Kinetic (MGU-K) much the same as this seasons KERS unit, but double the power, and a Motor Generator Unit – Heat (MGU-H).  This latter unit is unspecified in term of power and is connected to the single turbo charger (pressure charging system).  The rules specify a single compressor, and so this is likely to be large to give maximum boost.  Unfortunately this comes with a penalty of turbo lag.  While the Rally Cars solved this problem in the 1990’s by pumping unburned fuel into the exhaust and igniting it to keep the turbo spinning, this solution is not going to work for F1 with a 100kg of fuel as the upper limit for a race distance.  Instead the MGU-H will have to reduce the turbo lag.

Appendix 3 of the FIA F1 2014 Technical Regulations has a nice diagram of the energy flows allowed in the new ERS for next season: 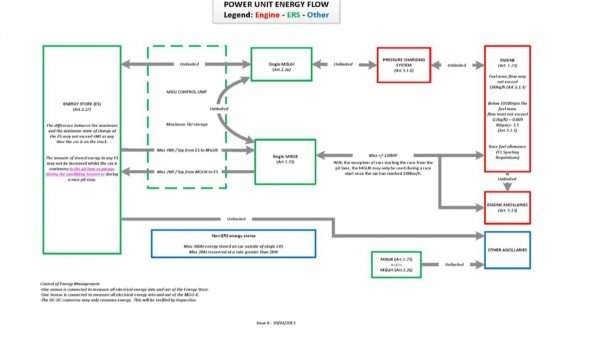 So the Energy Store has a maximum useable capacity of 4MJ (ten times that allowed this year), so on first glance it looks like the boost available from the ERS will be available for five times as long as this year (the motor is twice as powerful so consumes the available energy at double the rate), that would give a 161bhp boost for 33.3 seconds.  Unfortunately the situation is slightly more complicated than that, as while 4MJ of energy can pass from the energy store to the MGU-K each lap, only 2MJ of energy can pass the other way.  Could this open the door to even more strategic deployment of the ERS as drivers save up the available boost for a lap and then overtake an unsuspecting rival the next?  It is possible, and certainly it is one interpretation of the rules.  However looking at the allowable energy flows on the diagram this doesn’t take into account the MGU-H, which has unlimited flow both to and from the Energy Store, and the MGU-K.

Mid corner, with the driver on part throttle we are back to the situation at diagram 1 again, and so the cycle repeats.  With the energy flow between the MGU-H and MGU-K unlimited in either direction, as long as the turbo is big enough to supply the 120kW needed to drive the MGU-K, there should be no need for a button on the steering wheel.

If this proves to be the case, will you feel robbed of a ‘push to pass’ system, or do you consider it a more efficient way of generating the power an F1 car needs to race than the current 2.4 litre V8s?

This is an old article, written back in 2013 before the current generation of Power Units were introduced, and details my understanding of the regulations as written at the time. What I find really surprising, is that only now (nearly five years later) have Ferrari apparently discovered the ‘free’ energy that the regulations allow them to harvest from the MGU-H to feed the MGU-K. This is from an AUTOSPORT article (behind their pay wall): https://www.autosport.com/f1/feature/8362/is-free-energy-trick-the-key-to-ferrari-surge Now I appreciate it is easy to read the regulations and theorise that such energy is permitted, and altogether more difficult to actually put it… Read more »

I agree that it is easier to theorize than actually do, but I would have thought the unlimited powering of the MGUK by the H would have been a no brained to pour resources into. Maybe it really is just a very difficult engineering excercise. I’m thinking they just recently figured out how to get the full 4 MJ from the energy store to MGUK and this is the next logical evolution that Ferrari were the first to figure out.

I saw a report from a UK University, that looked at optimizing how the ERS should be used on the first generation of the Ferrari Power Unit. What surprised me was the MGU-H was only 60kW compared to the maximum 120kW of the MGU-K. I wondered at the time why it wasn’t bigger.

Previous article
3 things you must do if you are new to F1
Next article
Formula1blog.com Podcast #336- Japanese GP review