The 2013 Formula 1 season had a few moments of concern over tire degradation and in the case of the British Grand Prix, tire delaminating that led to blowouts. Pirelli, the sole-source provider of tires for F1, had been given a directive to make the tires degrade quickly when they entered the series and some argued that they were too aggressive in their approach for the 2013 season.

To those ends (damned if you do, damned if you don’t), Pirelli made a few changes for the 2014 season and not just to address the criticisms. You see, the series had changed with new engines, heavier cars, more torque and less downforce.

Pirelli have offered us a look into their impact these changes have made by comparing the 2013 and 2014 season from a tire perspective. There are some interesting differences and namely in the hard and soft tire performance areas.

There are some lingering concerns over the wet weather tires, however, as the FIA’s Accident Panel reviewed the crash of Jules Bianchi and mentioned Pirelli’s wet weather tire performance as something they would recommend the FIA allow for more testing to dial in the performance metrics. This is something Pirelli were asking for, if memory serves, long before the Japanese Grand Prix.

The most notable change was to their soft compound tire in 2014. Pirelli motorsport director, Paul Hembery, said:

“By changing the soft tyre in particular, the average durability of the compound
has gone up from 47 to 93 kilometres. This has led to increased possibilities for
different race strategies”

One of the other major changes is the durability of the soft and hard compound tires required fewer pit stops during the season and the delta is quite dramatic. Following pit stops can be a fun part of F1 but when 22 cars are making 3 and 4 stops, it can get very confusing for the fans at home.

Click on the graphics below for a larger view and enjoy Pirelli’s terrific infographic on how they impacted the 2014 season. 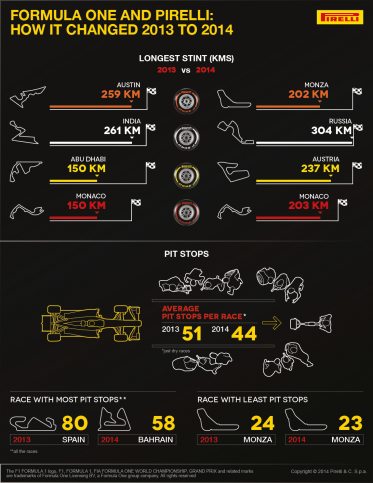 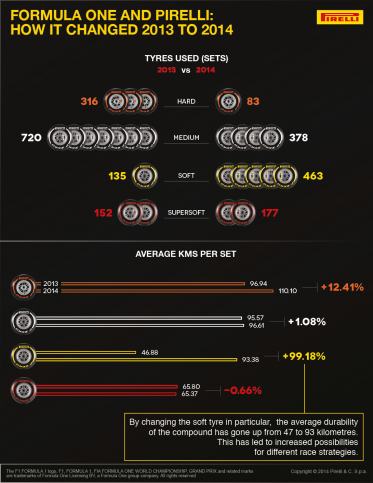