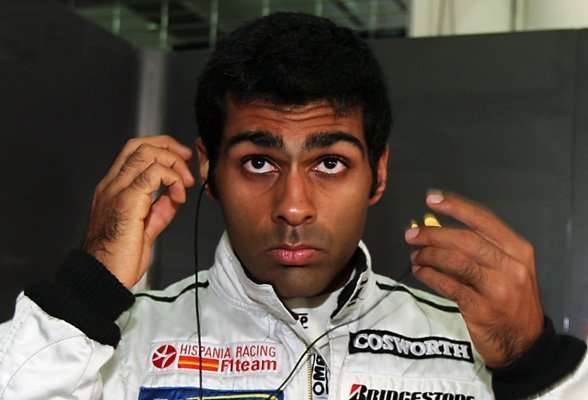 I’ll come right out and say it: Nico Hulkenberg is the most promising Formula 1 driver who doesn’t yet have a seat on the grid.

There might be reasons a team would give Nick Heidfeld a long look. And Adrian Sutil scored plenty of points last season and has a few moments that suggested his own talents. Paul di Resta performed well on Fridays in 2010 and has that DTM title. (I’m not even considering Kimi Raikkonen.)

But Hulkenberg, a GP2 champion, with a pole position in his rookie year simply has to be a driver that any team would look to and say, “We’ve got to get him into our system.”

The teams should say that. But they shouldn’t do it.

One of them with an open third seat ought to slot in Karun Chandhok, instead.

Now, obviously Chandhok didn’t have the same success in 2010 as Hulkenberg did. But keep in mind, he wasn’t in anywhere the same quality car. What he did manage to do was keep that slipping, sliding, going slow HRT on the track and outperform his teammate consistently.

At the least — which is maybe all one could manage in the 2010 HRT — Chandhok showed he can hold his own in F1. And that’s more than enough for a third seat because he brings a lot more along with him.

Even if Adrian Sutil doesn’t end up in F1 in 2011 (I’m becoming less and less shocked by this looming possibility), Hulkenberg would be behind three or maybe four other German drivers on German fans cheering list. And one of them is also named Nico.

Chandhok, by contrast, has not only India but other parts of Southeast Asia from which he can draw fans. (Yes, I do think the return of Narain Karthikeyan complicates that, but I think there are ways to keep Chandhok at the forefront, as noted below.) There is the coming Indian Grand Prix.

I don’t know where Chandhok got it, but the guy is solid on the PR front. I’d actually compare him to Mark Webber, who can combine straight talk with the typical obfuscation and a few light-hearted moments. Take, for example, his comments from an end-of-the-week Autosport article about Chandhok now working hard to secure a third seat in F1:

“I want something for the medium and long term – not just for 2011,” Chandhok told AUTOSPORT on Friday. “What I do in 2012 and 2013 is important. If that means taking a back seat, as reserve driver next year, then so be it – a bit like what Paul di Resta did in 2010. As long as it is somewhere further up the grid, then that is the best option.”

“I wasn’t chasing the HRT drive in 2011,” he explained. “The team didn’t make much progress last year and, at the time when we last spoke to them, it didn’t sound like there was a huge amount in the pipeline for this year. I had one year with them, and I am grateful and will always be grateful to them for getting me a foot in the door. But now I’m looking elsewhere.”

Did you see how he buried HRT but at the same time thanked the team? That’s not PR 101, that’s upper-level course work showing through. And he knows how to butter up potential bosses (a talent some here at F1B could use, if you don’t mind my saying). Here he is speaking about Tony Fernandes:

“I like Tony’s attitude about building an Asian team. He has been quite vocal about it, and talked in the past about building a team with Asian drivers and staff. For me to go there would be a big benefit to him too, especially as AirAsia is now flying to India.

“The team progressed well last year with its structure. There are a lot of good people there, and they invested well for the future. It seems like a good place to be for the immediate future – but at the moment nothing is done. Everything is still up in the air.”

Notice how he dropped Fernandes’ real business interest in there?

Finally, he’s also self-deprecating and has a sense of humor. Here’s his thoughts on another Indian making it on the grid:

“It makes no difference to me.

“It has been a pain in terms of all the telephone calls I have had today about it, but apart from that it makes no difference to me. The financial backing he has got is a long-term sponsor of his, so it doesn’t take anything away from me, and he has taken a seat which I wasn’t interested in.”

Now, remember, I’m talking specifically here about a reserve driver seat. And with the lack of testing, it isn’t like those third guys have anything to do, right? So I’d say to the teams: Make them be your pinch-hitting face for the team. Have them do as much of the PR work as possible, in part to also build up their fan base so if/when you promote them, a bunch of fans will be ready to cheer. And Chandhok is as capable of this, if not more, than any other driver.

And that thought leads us to the final piece to the puzzle. Not only is Chandhok great in the traditional PR routes, but he’s among the best of the top-tier drivers when it comes to embracing and exploiting new media. He’s great on Twitter. He’s making use of Facebook. A team should capitalize on this. (I bet he’d be able to perform in McLaren-like videos as well as if not better than Jenson Button and Lewis Hamilton.) And, again, he’d have the time as a third driver. In some ways, the intangibles become more important for this position.

That last point, I think, is the key: What is the role of a third driver at this point, anyway? They can’t spend hours and days on the test track. A few of them get occasional runs on Fridays, but that’s about it.

It’s time to redefine this role more explicitly and give it more of a PR piece. (It should go beyond showing up in old cars for demos, ala Ferrari’s legion of test drivers.)

If a team gave him a chance, I think Chandhok could make that redefinition work.