If it comes down to it, Vettel says, he’ll help Webber — maybe 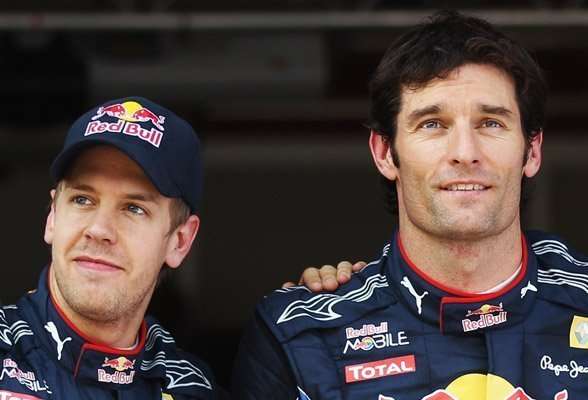 With one race left in the Formula 1 season and four drivers still able to claim the drivers’ title, Sebastian Vettel finally is admitting that he might just help team mate Mark Webber — if that’s how it has to be.

Vettel spoke to the BBC on the biggest topic in F1, and it basically comes down to this: Fernando Alonso only needs to finish fourth at Abu Dhabi if Vettel wins. But Alonso has to claim second place if Webber is standing on the top of the podium.

Get the picture? Vettel hints, emphasis hints, that he does:

“In that scenario, it is something you will think of,” said Vettel. “I think it’s clear.”

“In my case, it is pretty straightforward – all I can do is optimise my result, ideally repeat the result we achieved today and then it depends where those two guys are.

“For sure, you will have to judge according to the situation. Both of us, we know how to react. We had some moments we’re not very proud of and which we don’t want to repeat.”

Pressed on the subject, Vettel added: “What do you want to hear? It is one week. As a kid, I never liked (it) when my parents teased me for something and didn’t answer my questions. Now I am in a good position to tease you, so you will see.

Webber, on the other hand, may have learned from his saying too much at the start of the weekend, and said only this: “I think it depends how it is on the last lap.”

Christian Horner keeps to his usual line on the matter:

“The drivers drive for the team, they’ve received tremendous support this year, it would have been wrong to switch [their positions] today, we’ve backed them equally all year and it would have wrong to artificially take one of them out of the championship,” he told BBC Sport.

“Of course if we find ourselves in a situation where, on the last lap, the team and one of our drivers can win the world championship, the drivers will do whatever’s necessary to ensure as a team we achieve the best result.”

So, there you — sort of — have it. Red Bull is not in a very strong position to tell either driver what to do in Abu Dhabi, although that — as everyone is admitting — clearly could change during the race.

So what’s the strategy? Does the team let them race but make it very clear — especially to Vettel — that if things line up a certain way, you know what to do?