Impact of Scottish Independence on F1

Next week, the residents of Scotland vote on whether Scotland should become an independent country. While this will have no bearing on Formula 1 as far as I can tell, it may affect the way statistics are shown in terms of individual nation’s success in the sport. In terms of both race wins and driver’s championships the United Kingdom tops both tables.

The USA figure includes the ten times that the Indianapolis 500 was included in the world championship in the 1950s (when none of the regular F1 teams entered, so the race was won by local drivers). 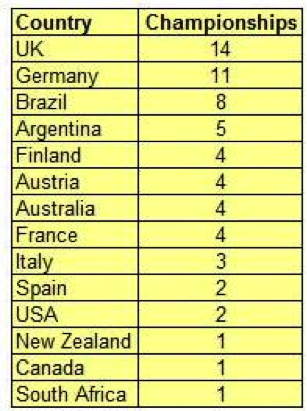 However if we take into account the relative population of the countries involved, the tables can look different. 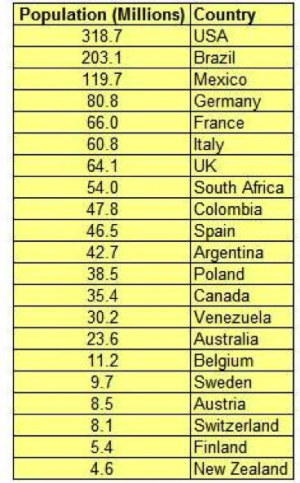 With the race wins per million of population looking like this: 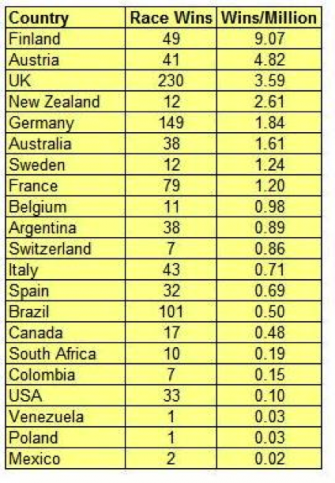 And the driver’s championships won per million of population like this: 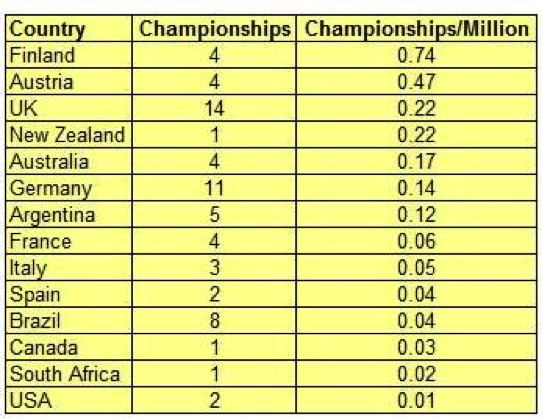 Here we can see that the relatively small population of Finland, Austria and New Zealand has moved them up the tables, while the large populations in Brazil, Germany and USA have demoted them.
Should Scotland vote for independence, it would divide the UK figures into those for Scotland (65 wins and 5 driver’s championships) Rest of UK (165 wins and 9 driver’s championships). With a population of only 5.3 million people (leaving 58.7 million in the rest of UK) the tables look different.

The overall wins per country still has the Rest of UK on the top, but Scotland is now in fifth place.

It is in joint fourth place for the number of driver’s titles. 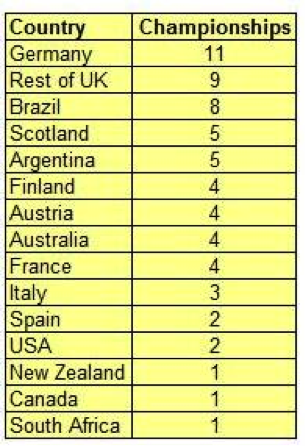 But when the small size of the population is considered, it beats even Finland into second place in both tables. 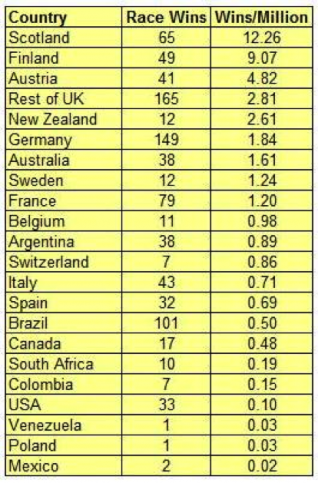 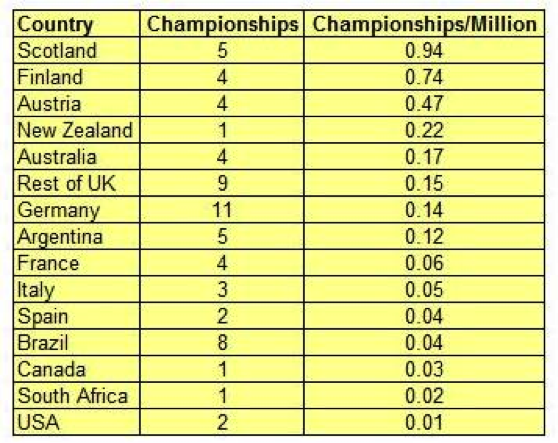 Some countries have a small number of truly world class drivers (Spain with Alonso), others have had a large number of race winners, but only one truly successful driver (France, with fifteen drivers who won at least one race, but only Prost who won the championship, but he did that four times). 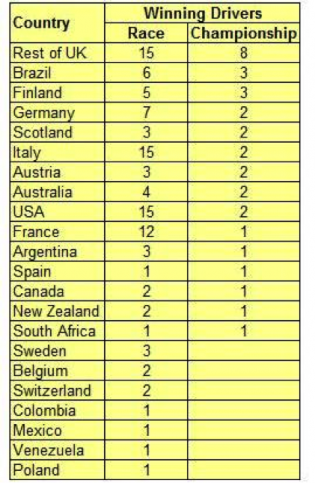 High numbers of winning drivers from nations that have been involved in Formula 1 for virtually the whole of its history (Italy, France and the UK) are probably in direct proportion to the number of drivers who entered the sport. The figure for the USA is high again because of the inclusion of the results from the Indianapolis 500 race in the first decade of the championship. What is surprising is how few of the drivers from France and Italy who had the talent to win a race but not the opportunity to win a championship. In most of the other nations about half of the drivers who won a race managed to win a championship. South Africa and Spain have perfect records in that their only drivers to win a race also won the title, while Austria and Scotland again have a better than 50% strike rate.

So, what is it about these sparsely populated cold countries that makes them so good at driving? After all it is not just in F1 that both Scotland and Finland have enviable records. The results in Rallying re also top class. Let me know your thoughts in the comments below.