Indy500 Preview: Carpenter on pole & a day at the track

Sunday brings one of the most exciting days for open-wheel race fans: both the Formula 1 Monaco Grand Prix and the Indianapolis 500 are run this last Sunday in May. History, glitz, and glamour abound between the oceans separating the Brickyard with royalty’s playground. Both have their own quirks, be it drinking milk after the win at Indy or greeting a royal house with Hollywood in its linage after winning along the Mediterranean.

This year, Ed Carpenter will start in pole position for the five hundred miles to be run round and round in Indiana. The little team that could came to Indy and beat the Penske cars, the army of Andretti boys, and the struggling Ganassi team this past Saturday in the final runs to pole. Staring next to him are Carlos Munoz and Marco Andretti, an IndyCar rookie in the truest sense making his debut both in the series and at Indy and the grandson of a racing legend, both racing for the Andretti stables.

Indy qualifying is always something of a headache, with most of the month of May used to find speed and reliability. In recent years, May has also become a time for the still struggling IndyCar to bolster its field. With eleven rows of three at the ready to be filled, the field of thirty-three is a large one…but in the heyday before the series split into CART and IRL there could be forty or more entries waiting with fingers crossed, hoping Bump Day would bump somebody else out of the running.

This year, only one driver entered will not start the Indy 500. Michel Jourdain suffered in his Rahal Letterman Lanigan car. Things got so bad during the late Saturday practice that the RLL put teammate Graham Rahal in Jourdain’s car to see if he could find some speed. Little could be done, and Jourdain was out. In, though, are four women, four rookies, four previous winners, four Brits, three Brazilians, one Scot, one Kiwi, a host of Americans, and yet more international drivers.

IndyCar drivers are seemingly unfailingly polite, though they often walk quickly and purposefully though the sea of fans. 2011 Indy Lights champion Josef Newgarden is in his second season in IndyCar, driving for Sarah Fisher Hartman Racing. He, too, is unfailingly polite and remarkably articulate for a 22 year old, though we should expect that from our racing drivers. His poise and knowledge serve IndyCar’s push for new fans admirably.

Though Indianapolis Motor Speedway is a large place, it is a small community. It has an even smaller pit lane. There is plenty of room for drivers and their cars, teams to jump over the wall and fling tyres about while changing them, but there is not much room behind the wall. It is a narrow strip of pedestrian and cart thruway that everyone involved has to navigate for a month, then the longest five hundred miles of the season.

Plenty of funny things happen in that little walkway. Last Wednesday, for example, reigning IndyCar champion Ryan Hunter-Reay had to put on a little driving demonstration of his own. Ever attempt a three-point turn in a space more narrow than your vehicle is long? He managed to swing the Andretti team golf cart around without hitting any of us pedestrians, but the fence that separates the pit lane grandstands from the walkway was not left unbent.

Mario Andretti provided more amusement, though less at his own expense, earlier in the day. Pedestrians in the narrow pit lane walkway must keep an ear out for the beep-beep of approaching carts. With the inside of the speedway so large, the garages and motorhomes are a decent walk from pit lane. Mechanics attempt to bicycle out, but are generally stopped by track officials. Drivers, team owners and other important folk use golf carts to get around. Usually in a hurry or just vaguely hoping for the seas to part, they use the horn to signal a faster vehicle approaching. It’s the blue flag of the pit lane, and a pedestrian quickly develops eyes and ears in the backof her head, ready to step out of the way.

Standing near the end of pit lane on Wednesday, a cart approached the Andretti Autosport pit boxes. Most people moved out of the way without noticing the driver. Most, but not all. One larger fellow either thought he had moved enough or was entirely unaware that he was in the way. Instead of using the horn, the driver made a pained face and gently steered the cart to rub tires gently against the heel of the man’s sneaker. Feeling the bump, the pedestrian jumped and turned around, looking a bit upset. He jumped further when he realized that he was in Mario Andretti’s way. He’d just held up Mario, and everyone around him was laughing. Absolutely laughing at him, and not at all with him.

In the end, Wednesday was just a practice day. It was the first really hot day of May for the teams and drivers after a week of unusually colder temperatures. Saturday’s qualifying day was typically warm, though the Fast Nine qualifiers and pole sitter Carpenter did not set their laps until the setting sun had begun to shade large portions of the track. Race day Sunday will again be cooler than usual, with a high in the upper sixties.

Chevrolet power has dominated at Indianapolis this season, with Honda unable to put cars powered by the Japanese company too close to the top of the timesheets, presumably due to their time developing a F1 engine for 2014. Alex Tagliani is the first-qualified Honda, starting eleventh in the middle of the fourth row. Still, Sunday is a long day and much can happen in 500 miles. 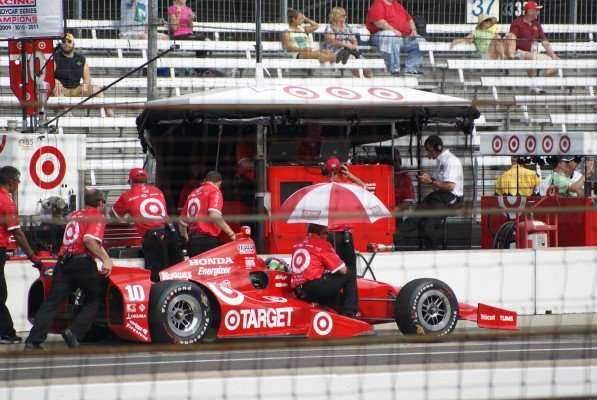 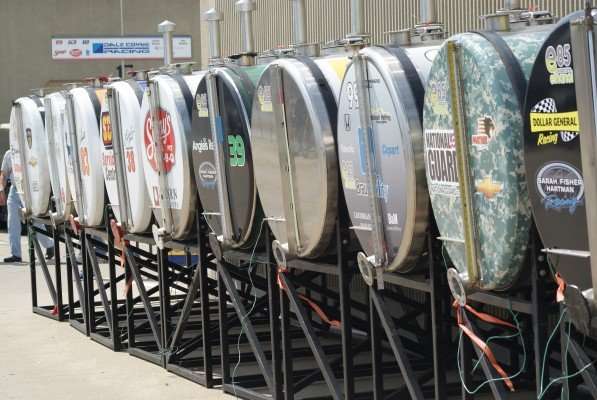 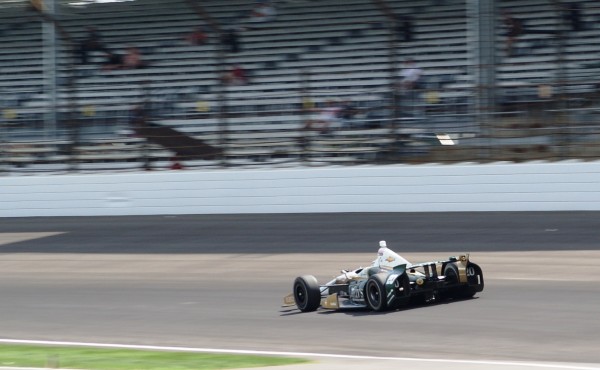 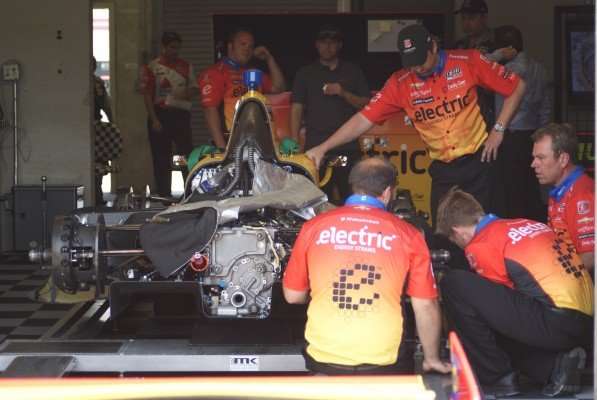 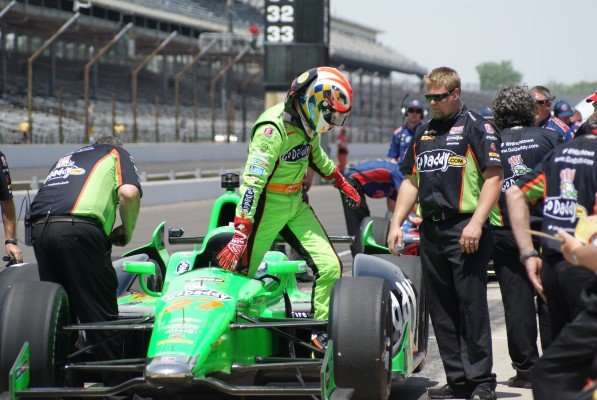 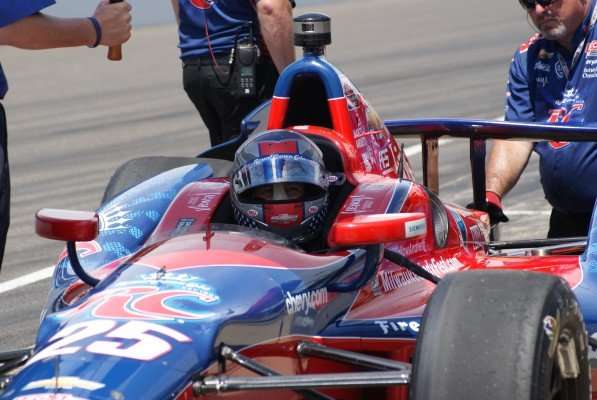 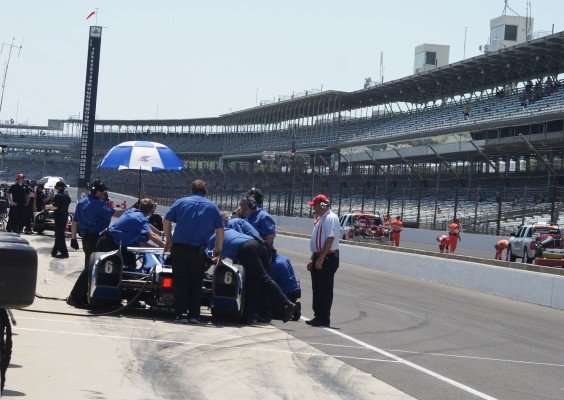 Previous article
Ecclestone: ‘Everyone needs to agree’ to customer cars
Next article
How important will pole position be in Monaco?