Gooooooood morning Race Fans! Most of you have already enjoyed the Monaco GP, and now it’s time for the 101st running of the Indianapolis 500 Mile Race. Both Fearless Leader and I are here at the Indianapolis Motor Speedway, and although clouds have moved in, the forecast for rain has been pushed back to late afternoon. We may actually get 200 laps in today!

Walking around the pit lane and garage areas, I noticed a couple of differences between the Honda and Chevrolet aero strategy. First, as Todd discussed earlier in Could a Penske rabbit strategy work, we expected Juan Pablo Montoya’s car to be a bit different in setup to his fellow Team Penske teammates. After looking at his car and those of his teammates in the garage, there were no obvious differences. That is, there were no wickers or obviously different wing angles. However, understand that half a degree is damn difficult to discern with naught but an eyeball. 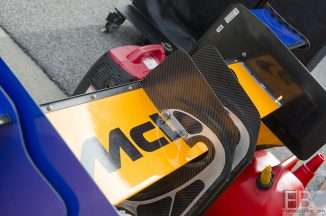 I did notice a significant difference between most of the Chevrolet wings and most of the Honda wings. The Honda wings, both front and rear, had a shorter chord length, but sported a wicker on the trailing edge. The Chevrolet wings had a longer chord and no wicker. The difference is significant enough that you should be able to notice it during the broadcast today, especially for the rear wing. Is this part of the Chevrolet strategy to run a bit less drag and improve both speed and fuel mileage? As we saw last year with Alexander Rossi’s amazing drive to Victory Lane riding on nothing but fumes, fuel mileage can win or lose a race here at Indianapolis.

This is the greatest day in motorsports! Monaco . . . complete. Indy . . . up next. And, the 600 from Charlotte later this afternoon. Fantastic!!!

If only every Sunday was like this! Oh well, I guess we’d all get jaded. GO ALONZO!!!

At 1/4 mark of the race and Alonzo has led laps and currently run second. Incredible! This just goes to show how talented he really is.

I have never watched Indy before, I am impressed with the first 120 laps. I’m not a fan of put your foot down and turn left but the passing, oh my gosh the passing. I have seen more passing today than in the last four years of F1, i think I need to go lay down, I may have the vapors.

Uggggghhhhhh!!!!!! Alonso was so close. Again, a Honda engine lets him down. Regardless, he showed everyone he could run on the ovals and run with the best Indycar had to offer. I do hope somewhere down the line he gets to comeback and try again.