The Verizon IndyCar Series is a spec series, right? Yeah, well, not exactly. Yes, all teams are mandated to use the Dallara IL-12 chassis, but there’s a lot of latitude given to what suspension elements are used, how they’re used and setup, and in the aerodynamic package used. Both engine manufacturers for the series, Chevrolet and Honda, are permitted to develop their own aero kits for the IL-12 chassis, and there are some noticeable differences especially in the rear wing and rear wheel pods. There are also differences within the teams in how and what aero elements they deploy. One is not required to carry an aero package in its complete configuration, and during qualifying we saw differences even between the Team Penske teammates.

The biggest difference between the Honda and Chevrolet rear wing assemblies is how they’re attached to the chassis. Honda has elected to utilize a gooseneck design similar to what we’ve seen pioneered in sportscar racing, whereas Chevrolet has chosen a traditional mounting solution.

The Chevrolet solution has the advantage of simplicity, offering minimal material needed to support the wing, and providing support through compression rather than tension. Carbon fiber, by its nature, is strong under tension, but weak under compression. The traditional mounting method therefore puts the strength reliance on the epoxy rather than the carbon. At Indianapolis, however, this isn’t a substantial issue as the rear wing provides very minimal downforce, serving more as a trim tab than anything else, especially during qualifying. 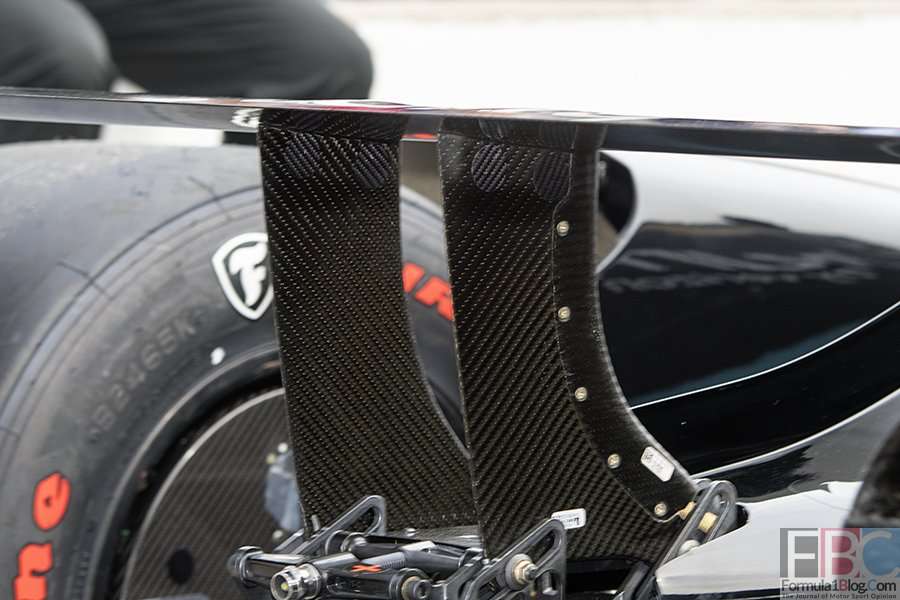 The gooseneck design of the Hondas offer a couple of distinct advantages over the Chevrolet’s tradition mounting design. First, the gooseneck provides support through tension, utilizing the strenth of the carbon fiber rather than relying on the epoxy. Second, it leaves the underside of the wing, the area that does the bulk of the aerodynamic work, clear and unobstructed. Since the support stronger under tension, it can be made thinner than Chevrolet’s support and provide less disturbance to the air stream. 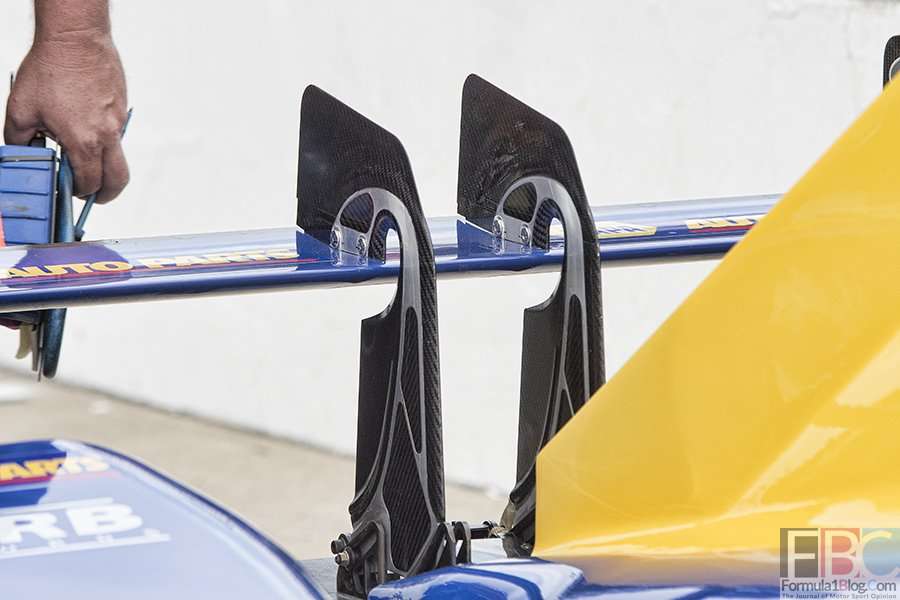 The rear wheel pods, which will disappear next season, are also significantly different between the two manufacturers. The Honda (right) solution features a flush endplate, whereas the Chevrolet (left) features an open design. In both cases, the front of the pod, closest to the tire, is sealed, so there’s no airflow through the pod. There is a vent on the lower inside corner of the Honda pods to allow high-pressure air to vacate the pod. The Chevrolet features a fin element in the middle of the void space of the pod.
[singlepic id=2059 w=300 h=200 float=left]

There are even aero differences between teammates. Most noticeably on Day 1 of qualifying were the choices made by the Team Penske No. 2 and No. 22 teams driven by Josef Newgarden and Juan Pablo Montoya, respectively. The No. 22 team elected to omit the right-side rear winglet while the No. 2 team retained this element. Removing this aero appendage reduces the over drag produced by the car, but it also reduces the downforce produced. Being on the outside, more load is transferred to the right tire than to the left, thus reducing the necessity for additional downforce. The No. 22 team chose the more conservative route and utilized both left and right side elements. The gamble paid off for Montoya as he outqualified Newgarden. During Monday and Friday practice, Montoya’s team reattached the right side element, although we will likely see Montoya’s car continue to run a more aggressive aero package during the race in an attempt to be the rabbit, enticing the Hondas to chase and perhaps over-stress their machines. I’ll be sure to swing by all of the Penske garages on Race Day morning to take a look at their solutions as best as they allow us.
[singlepic id=2061 w=300 h=200 float=left]

Getting the aero solution right at Indianapolis is critical. Guess right, and you are rewarded with greater speed and/or better mileage. Guess poorly, and you’ll either be driving a car that feels like it’s dragging a boat anchor, or you’re in the wall. We’ll see who chooses wisely tomorrow.

Interesting post thanks Doug (is this really you this time Doug????)
The subtleties involved in motorsport aero are fascinating, the teams are always looking for any advantage over their rivals, no matter how small.

Yep. I’m to blame this time.

Great photos to illustrate the points (do you get credit for them too?)

Yup. Photos are mine, too.

Yup. Those are mine, too. I’ve been thinking about this topic for a while. Lots more to analyze, but too much for a singular article. There are significant differences to the front wing geometry in the road course configuration, too.