Several people have asked me lately about the USGP in Austin and just how the Mexican Grand Prix is impacting tickets sales at the Circuit of the Americas (COTA). I’ve had messages sent to me suggesting they are giving away tickets and selling them at Wal Mart and that there must be some sense of panic with the folks at COTA.

I spoke with circuit boss, Bobby Epstein, because in my mind the Mexican GP and the USGP are two different locations, target markets and races. Was there a lot of travel from Mexico to visit the USGP? Could be, I don’t have those metrics but I wanted to know where COTA was on tickets sales comparatively instead of just continuing the conjecture.

“If you haven’t hear our latest podcast, Paul discuss the radical differences between COTA’s esses and Suzukas…a must-hear insight”

According the Epstein, tickets sales are on track with this time last year. The circuit explored more outlets for their ticket sales and Wal Mart isn’t one of the. They are, however, selling tickets at Costco and according the Bobby, the sales have been terrific at that outlet. Unlike other circuits, COTA is putting a big push for affordability as well as accessibility.

COTA has a $99 ticket option that is selling like pancakes and why shouldn’t it? As Paul and I have revealed before, some of the best places to watch the race are in General Admission and especially at the exit of the esses. We’ve walked the entire track during grand prix weekends and to be honest, there really isn’t a bad seat in the house. How about all three days for GA at $169?

When other tracks like Silverstone are worried about their ticket prices having to increase, COTA is trying to be as fan-friendly as they can and nothing says “we like and care about your experience at COTA”, than making a Formula 1 race as affordable as possible. 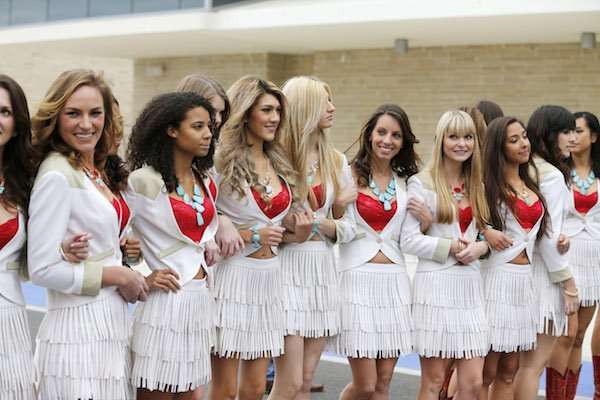 Has Mexico impacted the USGP? From what I can tell, it hasn’t according to ticket sales which are on pace with last year. It’s a good sign too. While the Mexican GP has sold 100,000 tickets, the capacity for COTA is larger so perhaps that is part of the numeric equation as well.

This year will be special as American Alexander Rossi will be racing at COTA along with our favorite plucky-teen Max Verstappen. You know he’s 18-years-old now and has an official driver’s license.

In all, it’s great news that ticket sales are brisk and on pace with 2014 and the circuit does a terrific job of making you feel welcome. Not to mention that Elton John and his band will be playing at COTA and who doesn’t want to hear some Crocodile Rock?

With that said, I’ll plan on seeing you all at COTA to watch the USGP. Don’t miss it! AS grand prix go, this is one of the most affordable races on the F1 calendar.

Was that a story or infomercial I just read?

all depends if the writer actually has to pay his own way into the paddock or will he gain access via some other less costly “avenue”….;-) perhaps as a guest of the Track etc….we’ll never know

Totally agree with NC, folks you HAVE to get here and support F1 in the USA at this beautiful circuit! As much as i want to get to some historic F1 tracks in Europe and Canada, this is the only F1 venue I have been at so far, this will be my 3rd time because it affordable! GA tix are less than some of our fav geriatric-legacy classic rock band concerts and right now this week plane flights are totally awesome.We just booked LAX to Austin for under $200 a person. This is exciting on several fronts…being AT a F1… Read more »

I agree, I know I would rather sit in general admission seat then pay $150 seats that I have to seat all weekend . Remember last year Texas Motor speedway was having a fit about COTA impacting the ticket sales.

I get COTA USGP Groupon offers in my e-mail about once a week. I was wondering if the Mexico GP would hurt USGP sales since the races are back-to-back. I expect management at COTA to show a brave face publicly. Like past years, this year’s race coincides with a University of Texas home game. I really wish COTA get an earlier date in the schedule.

Ever been to Texas during the hottest part of Summer? Not quite as bad as Abu Dhabi and the like, but 100ºF (38ºC) at a minimum with high humidity to push it to about 115ºF (46ºC) is no picnic. November dates are a slice of Heaven for us, and the attendance during a UT football game wasn’t bad at all. I’d rather have it during that time. As it is, heat stroke is at least a minimal possibility.

I live in Austin, Texas and lived in Texas for 20+ years. I know the weather patterns. I would prefer a spring race date than October or November and then they could attract other racing series on the same weekend.

50 years. Spring starts the monsoon season. November was very ideal for me (I attended the first two years.)

Not much of monsoon season while we’re still in extreme drought conditions. Timing is everything and the USGP gets overshadowed by college and pro football in late October and mid-November.

They’ve had the same Groupon offers for the last two years. They are block resellers cashing in the Fri & Sat tickets mostly. With UT starting at 1-3 this year, this might be less of an impact than usual. As to the date, I think they have found the sweet spot. The first year it was just before Thanksgiving and FP1 was around 40F. Two weeks ago, WEC/TUSC raced and it was almost 100F. Halloween is usually just right.

I am still tossing back and forth on what to do. I’m debating on making my own package with plane, hotel, rental, tickets, parking pas, etc.. Or I’m going with the cota experience package.

But I’m for sure going!

Is there going to be a f1b meetup this year?

If someone can find a quiet bar (I’ll keep my eyes peeled).

GA tickets are great on Fri & Sat for taking in different views and moving around, but don’t plan on doing that on Sunday. You need to get there early and find a good spot, because you will be there all day. The hillsides are packed tight, with little room to move, and an obstacle course between your chair and lunch. Sales will probably drop a little this year(they’ve dropped a few thousand each year), but I’m sure that they’ll still top 100,000 on race day. For those not in Austin, is COTA running TV commercials for the race nationally?… Read more »

Austin area Costco stores have Sunday only tickets for $89.

Previous article
If Red Bull exit F1, Pirelli may also
Next article
Button at McLaren in 2016

This website uses cookies to improve your experience while you navigate through the website. Out of these, the cookies that are categorized as necessary are stored on your browser as they are essential for the working of basic functionalities of the website. We also use third-party cookies that help us analyze and understand how you use this website. These cookies will be stored in your browser only with your consent. You also have the option to opt-out of these cookies. But opting out of some of these cookies may affect your browsing experience.
Necessary Always Enabled
Necessary cookies are absolutely essential for the website to function properly. This category only includes cookies that ensures basic functionalities and security features of the website. These cookies do not store any personal information.
Non-necessary
Any cookies that may not be particularly necessary for the website to function and is used specifically to collect user personal data via analytics, ads, other embedded contents are termed as non-necessary cookies. It is mandatory to procure user consent prior to running these cookies on your website.
SAVE & ACCEPT
wpDiscuz
15
0
Would love your thoughts, please comment.x
()
x
| Reply
Comment Author Info
Report this comment