Is the cream rising to the top? Schumacher thinks so

We certainly don’t claim to be prophets of F1 fortune but there could be four or more teams at the sharp end of the grid challenging for wins this year. Apparently Michael Schumacher feels the same as quoted by Mr. Straw at AUTOSPORT.

“It’s very tough for all of us to understand what is the order of teams,” he said. “We have four that I think are the major teams, and others that look very interesting such as Sauber, the car is quite quick, and the Renault – there is a question mark how quick it is.

“If you look at other teams [on long runs] you have a certain drop off, that is tyre related. The good teams sort of stay all in the same window.

“But we are not able to be precise because you can play so much with the fuel load, and even with the ballast if you want to. So there’s a lot of speculation going on, even for us, but it’s very interesting.” 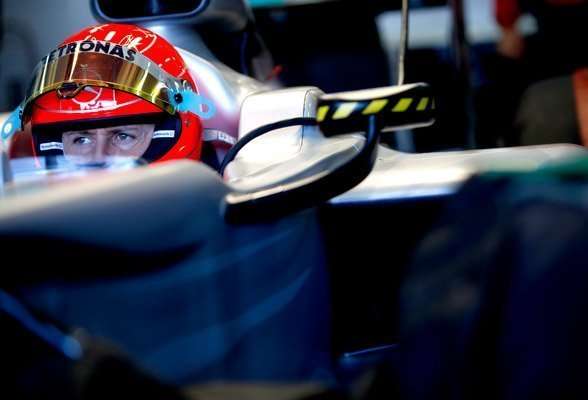 Michael Schumacher: â€œWe had a good day today to end this weekâ€™s test programme. The weather affected us a little in the early part of the day but we were able to use our time very effectively once we could run on dry tyres. We completed everything that we wanted and were able to increase our understanding of the car a step further so overall itâ€™s been positive. Itâ€™s very tough to understand the order of the teams just yet as everyone can play so much with the fuel loads. So there is a lot of speculation going on but itâ€™s very interesting!â€

Ross Brawn: â€œItâ€™s been a difficult week weather-wise for all of the teams out in Jerez however we have achieved a significant amount of mileage in both the wet and dry conditions and completed some important test items on our pre-season testing programme. This week has enabled us to increase our understanding of both the car and the tyres and our focus for the final two tests will be to continue to develop the performance of the MGP W01 and ensure the team and our drivers are fully prepared for the first race.â€

No doubt it is difficult to know for certain and as with everyone else int eh world, I offer the testing preamble: due to unknown fuel weights, balast, testing programs and set-ups, it is very difficult to know anything from testing. There, I said it.

Now, what Schumacher saw was the four major teams looking on par or relatively close to each other. The top four could be sandbagging a bit and hiding some pace but by and large, they seem in the approximate neighbor of performance with each other.

Interestingly, Schumacher singled out Sauber as a team to keep and eye on and I’ve been making similar rumblings all week. Not because I am a genius but because everyone knows this is really a BMW car with Ferrari power and the odds are BMW fixed their miserable issues from last year. Chances are, like Brawn GP, they may enjoy a modicum of success at the hands of an orphaned diamond of a car.

Renault is interesting issue as well because they had a very slow start to testing but have been making up ground and raising eyebrows as to just how well they will do. They finished 4th today in testing and Kubica seems positive about their chances…just like all the drivers do including Jose Maria Lopez of USF1 I’m sure. Sutil even suggested that the pace is real and they may have found the missing slow and medium corner down force they were missing last year.

Can we tell anything from testing? Schumacher has been to many, many testing events and while he could be playing the media and contributing the Mercedes GP’s sandbagging gambit, he does know enough about what he sees on track and which teams he feels look strong. I’ll take his word for it over mine. Perhaps my willingness to trust Schumacher in this instance is because I want this to be true. The sight of 4 or 5 teams battling each weekend for the win is enough to make…how did that Ferrari/Fisichella press release go?…”Motosport fans mouths water”.

Alright, so who is it going to be? Can Sauber make a push for 2010? Will continued development costs throughout the year hamper their long-term future? Is Renault sandbagging along with McLaren and Mercedes? Will Force India finally be good in low down force tracks?