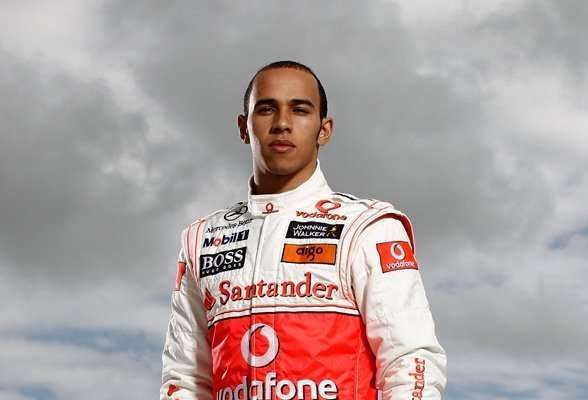 Everyone, these are McLaren’s fun facts, not ours. I can only imagine what F1B’s would be.

2. Not one to be messed with, he became a black-belt in karate aged just ten!

3. Although it would be almost another ten years before he drove in Formula 1, Lewis began breaking records in the sport back in 1998 when he became the youngest driver ever to sign for a Formula 1 team. He was just 13.

4. Only three years old at the time, Lewis got his first taste of a go-kart on a family holiday in Ibiza back in 1988. It’s a one of his fondest memories and will undoubtedly be with him forever.

5. Everywhere he goes, music goes with him. An mp3 player and headphones are must-have possessions when travelling, as are a guitar or keyboard which he plays at whichever hotel he happens to be staying in. He can also play the drums.

6. Plucky confidence and an autograph pad arguably sealed his destiny. He approached McLaren Group chairman Ron Dennis at the 1995 Autosport Awards asking him for an autograph. “One day I want to be racing your cars,” he said to Ron…

7. Formula 1 circuits such as Sepang in Malaysia, which guarantee extremely hot races, see Lewis drinking three litres of water before the start in order to keep cool and ensure he is properly hydrated.

8. “It’s an absolutely incredible track,” says Lewis about Japan’s Suzuka circuit. Others he enjoys are Spa-Francorchamps and Silverstone, but his favourite is the Monaco street circuit. “My victory there in 2008 is still probably my best win and one of the greatest moments in my career.”

9. One of his hobbies is racing remote-controlled cars, which led to his first TV appearance on popular children’s television show Blue Peter when he was just six. Beating his much older competitors in an RC car race saw him being gifted the first of his three Blue Peter badges.

10. No category of competition has ever fazed him – he was won in every category he has raced in to date.

11. He never thinks twice about the dangers associated with racing a Formula 1 car, but sharks and snakes tend to make him a bit fearful!

12. In his teens, he used to play football with Aston Villa star Ashley Young.

13. For his phenomenal world title-winning efforts in 2008, Tag Heuer gifted him a diamond-encrusted watch. It’s the only one of its kind in the world and he considers it his favourite item of clothing.

15. By his own admission, Lewis lost count of how many trophies he won before graduating to Formula 1 a long time ago. The number is estimated at 300.

16. He is adamant on keeping his original helmet design, principally coloured yellow, in order to remain true to his roots. However, occasionally he sports one-off designs, such as one with a roulette wheel at last year’s Monaco Grand Prix.

17. The sounds of Bob Marley can be heard emanating from his Mercedes-Benz GL SUV when he’s cruising around public roads.

18. Over 80,000 people were at Silverstone to watch him set a fairytale pole position at his home race in his debut season, breaking the track’s Saturday attendance record by a whopping 12,000 people.

19. “My dad told me and I just bawled my eyes out.” Lewis considers Ayrton Senna one of his idols, and hearing of his death as a nine-year-old boy in 1994 affected him deeply.

20. The number of consecutive podiums he scored in his debut Formula 1 season is more than four times greater than the previous standing record. He also holds the record for the most points scored in a debut season – 109.

21. Being an Arsenal supporter, Lewis was thrilled to be able to train with the team’s former talisman striker, international superstar Thierry Henry, of whom he’s a huge fan.

22. Even though he’s an extremely disciplined and fit individual, Lewis does have a weakness after all – a very big sweet tooth.

23. The speed he was travelling at when he had his massive crash at the Nurburgring in 2007 was approximately 260km/h.

25. Before he can get his hands on his favourite road car, the McLaren XP1 LM, he needs to win another two world championships for Vodafone McLaren Mercedes. The car was promised to him by Ron Dennis.

26. Lying on a beach somewhere in Thailand is Lewis’ idea of a perfect getaway.

Should I dare ask F1B readers for theirs? Happy birthday, Mr. Hamilton.