Perhaps they represent the last important pieces of the 2017 Formula 1 driver appointments and it could be argued that it was relatively predictable but Valtteri Bottas will leave Williams F1 and join the Merceedes AMG Petronas F1 team as Lewis Hamilton’s teammate.

“We did the contract today and obviously I’ve been dreaming for a long time to drive for a team like this, a team of champions,” said Bottas as he was unveiled to Mercedes’ workforce. “So I’m really proud to be part of this and proud of what you’ve achieved in the last few years but also in the whole history of Formula 1. It’s mega to be driving a Silver Arrow myself this year.

“I can’t wait to start working properly. There is still enough time until testing to get everything sorted. My goal for the first race is to get all the points available that there’s absolutely possible in the car. I’m still missing my first win, so that’s the first mission.”

The 27-year-old Finn will join the team after prolonged discussions between Williams and Mercedes but perhaps more interesting is the lack of any discussion over the length of the Bottas contract at Mercedes.

Leaving Williams was an complex issue that entailed more than just Valtteri’s career and opportunity. It had to make sense for Williams as well as Bottas was their prime driver having announced teenager Lance Stroll as the replacement for a retiring Felipe Massa at the end of 2016.

“With Valtteri having a unique opportunity to join the current Constructors’ Champions, we have been working hard to ensure that an agreement could be made with Mercedes to give Valtteri this fantastic opportunity,” said Williams deputy chief Claire Williams.

“Valtteri has been part of the Williams family since 2010 and in that time, has proved a huge talent, securing nine podium finishes. I would like to take this opportunity to thank him on behalf of the whole team, and wish him a successful season as he joins Mercedes.”

One would expect a favorable deal for the Williams engine supply contract with Mercedes was part of the equation. Also, part of the deal was finding a replacement for Bottas and for that, Williams re-heated their recently retired driver Felipe Massa who announced he will rejoin the team for a one-year deal which presumably will give them time to find a long-term replacement.

Concerns over Felipe Massa’s desire to get back into a car he just stepped out of for the last time, were addressed by Massa himself:

“I always intended to race somewhere in 2017, but Williams is a team close to my heart and I have respect for everything it is trying to achieve,” said Massa who retired last November.

“Valtteri has a great opportunity, given the turn of events over the winter, and I wish him all the best at Mercedes.

“When I was offered the chance to help Williams with their 2017 Formula One campaign, it felt like the right thing to do. I certainly have not lost any of my enthusiasm for racing and I’m extremely motivated to be coming back to drive the FW40.” 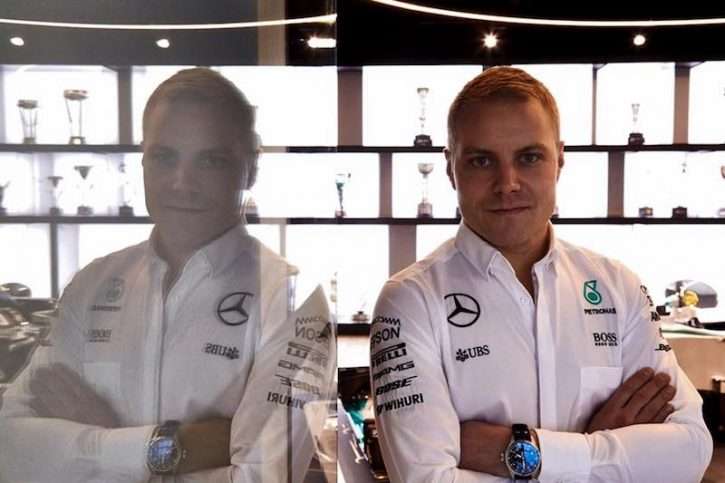 For Bottas, he’s scored nine podiums in his career at Williams, he knows the Mercedes engine and software program, he is a no-drama driver that will score points at every opportunity and that’s what Mercedes needs. It helps that Mercedes boss Toto Wolff was part of a group managing and mentoring Bottas’s career too.

“I think Valtteri fits very well in our team, as a driver he’s very fast, and he has also the heart in the right place. He shares our values and passion, and he’s modest and humble and he’s hard working,” said Wolff.

Mercedes has two men in their young driver program in the form of Esteban Ocon—who will replace Nico Hulkenberg at Force India—and Pascal Wehrlein who will now join Sauber for 2017. Neither driver was the go-to option for Mercedes as they were looking for a seasoned driver who would be able to replace Nico Rosberg and deliver at the same level as the retiring German. Bottas fit that bill and was less of a gamble for the team.

Well I hope he takes it to Hamilton. I think merc have weakened there young driver program by not putting in werlein

well, either they know something we can’t (like why Hamilton will allow this or perhaps Hamilton is leaving?) or Bottas is jumping from the frying pan into the fire(storm of hatred from Hamilton’s people).
Bottas hardly seems like a No.2 driver type….

You seem to be reading too much into this. It is highly unlikely HAM would hold any power of veto where the appointment of a new driver is concerned and I believe Merc were genuinely taken by surprise by ROS’ retirement. They now also likely have to sort the small matter of official test driver. BOT was the best available option and I hope he rises to the occasion. ROS proved you do not need to be the faster driver to prevail over your less consistent team mate over a season. While I suspect ROS is quicker than BOT over… Read more »

The rumour mill got it all right. The news on Bottas and Wehrlein is great, Bottas should be able to step up to the top team, and hopefully will soon be giving Hamilton as much competition as Rosberg did. Wehrlein looks to be pretty talented and achieved some amazing qualifying and race performances out of the very twitchy Manor, he’s worth another season. As for bringing back Massa, definitely a comprmise move for Williams. I hope their car performs well enough that they can attract a strong replacement next year. Now N.C, have you got a good summary of all… Read more »