Narain Karthikeyan was the center of a small bit of controversy when Force India owner Vijay Mallya dismissed him and countryman Karun Chandhok as not being F1 material. 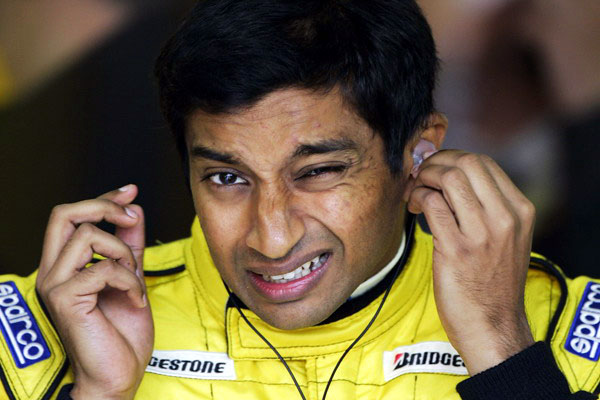 â€œIn my F1 context, Narain doesn’t fit in. I have not let my personal relationship (with Karun Chandhok) come in between. Only the lack of suitable replacements has forced us to retain the same team for 2009. The normally expected GP2 graduation didn’t happen this time,â€ Mallya was quoted as saying by the Asian Age

This prompted a bit of a dust-up between the drivers and the Indian team owner. even commercial rights boss Bernie Ecclestone was keen on seeing Chandhok in the Force India colors.

A year later it seems that Narain Karthikeyan is not waiting for a drive at the Indian team. He is more intent in another series and to continue racing. Most recently he has been seen in the A1GP series as well as the 24 Hours of Le Mans (although a dislocated shoulder sustained just before the start of the race while leaping pit wall kept him from competing).

It seems that things could be looking up for him if not a tad formulaic. Karthikeyan is now testing for, what else, a NASCAR team in the ARCA series.

According to Reuters Sanjay Rajan, Karthikeyan will be seeking a permanent opportunity in the States and I say the best of luck to him. Although I still think former F1 drivers should seriously get in to rally but that’s my biased opinion.