Lotus F1 offered a nice Q&A with their new race-winner, Kimi Raikkonen. Kimi secured his first win upon returning to Formula One after a 2-year hiatus and has done, in one year, what many believed Michael Schumacher was going to do in three years…win a race!

How does it feel to take your 19th win ?
I’m very happy for the team – and myself – but mainly for the all the crew here and everyone at Enstone. It’s been a hard season and I feel this win is well deserved for everyone and just what we need. It’s also something great for all the fans who have continued to support me and the team. We’ve not had the easiest time in the last few races. Hopefully this gives everyone more belief, not just for everyone working at the track and at the factory, but for everyone behind the scenes running the team. I hope this can turn around the tables and give us many more good races and wins ; if not this year, then next year. 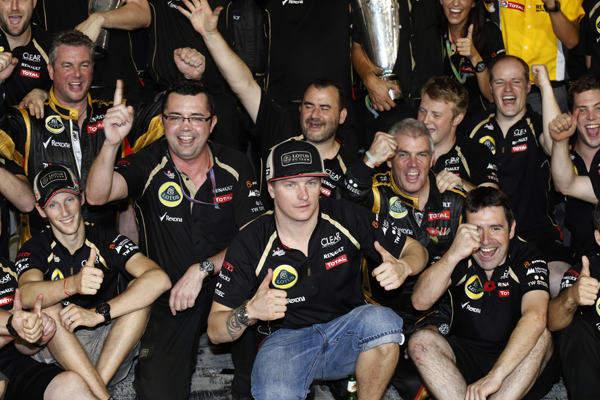 How does this win stack up against the other eighteen ?
To be honest it’s just another win on the list for me. It’s great of course, because it’s been a few years, but the wins prior to this one were very similar ; we didn’t have the best car, but we fought and still won. It’s great to win now, so people will stop asking me if I can win or not, and at least it makes it a bit clearer !

Is it good that you’ve answered that ‘when’s the win coming’ question ?
I never cared really what people think – if I don’t finish the next race, then they’ll think that I’m as bad as that race. I’ll just do my thing, and if I’m happy with what I’m doing and it’s the best it can be for the team, then that’s that. So I really don’t care if people are thinking differently of me now, than what they did three hours before the race.

Tell us about your emotions as you took the chequered flag ?
I’m happy, but there’s nothing to jump around about. We still have a few races to go, I’ll try to do the same again. For sure, we’re going to have a good party tonight and hopefully tomorrow, when we are feeling bad after a long night, we will remember how we feel. I’m just happy for everybody in the team.

Tell us about your start ?
It was key to get behind the faster car and not get stuck behind cars that aren’t as fast as us. We had a good position on the grid and we made it better at the start. I think we’ve had some very good starts before and compared to the others, today was a pretty normal start on our scale. I managed to pass Mark [Webber] and Pastor [Maldonado] before I changed into second gear. I’d had a very good practice start on the warm-up lap so I knew this was going to be good.

How long will your celebrations of this win last ?
I have almost two weeks. As long as I manage to get myself to the next race I think the team is happy. Maybe I will try to get home at some point.