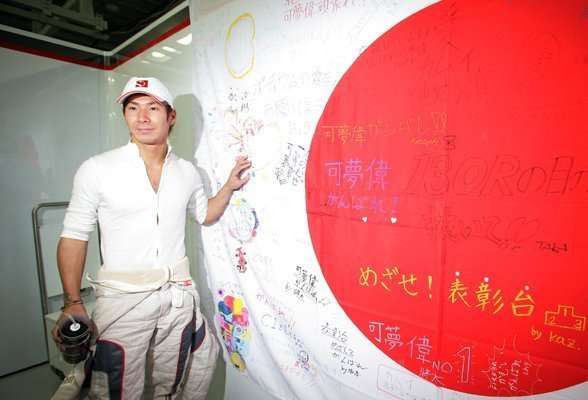 Noted passer, albeit perhaps not yet prolific one, Kamui Kobayashi has let the secret to his overtaking skills out of the bag in an interview up at the Sauber website.

And it’s the best F1 interview in recent memory:

How would you summarise your season?
.
Kamui Kobayashi: “We had a lot of ups and downs, but overall we had a good season. In the beginning we were struggling a lot. This was a pretty bad time. It was hard, and it was very difficult to recover from this situation during the season, because nowadays there is no testing. Despite this, towards the end of the season we were much stronger. The team did a great job to recover from this and I want to thank them for all their work.”
.
In which area did you improve the most?
.
Kamui Kobayashi: “In every area. This is how it has to be, especially if you are a rookie.”
.
What was the best moment of 2010 for you?
.
Kamui Kobayashi: “I think I had an interesting race in Japan. It was a very nice moment for me and for the Japanese fans.”
.
Which was the worst experience?
.
Kamui Kobayashi: “That was when I crashed on the first lap of the Canadian Grand Prix.”
.
What is your secret for overtaking?
.
Kamui Kobayashi: “Because I am Japanese I have small eyes – so I can’t see the others guys.”
.
…and seriously?
.
Kamui Kobayashi: “If I feel I can overtake I just do it. That’s all, no secret.”
.
What do you want to achieve in 2011?
.
Kamui Kobayashi: “My personal aim is to make zero mistakes. For the team I hope we will have a good car, and be able to fight for points on a regular basis to improve our position in the championship.”
.
What will you do in the winter break?
.
Kamui Kobayashi: “I have some appointments in Japan and I will be returning to Abu Dhabi soon for the opening ceremony of the Ferrari World. I will also spend two weeks on holiday in Bali and, of course, I will be training. But in terms of fitness training, it helps that nowadays we have more time during the season to exercise because it is also very important to be able to do this consistently.”
.
If you had a free wish – what would it be?
.
Kamui Kobayashi: “This is an easy one to answer. In Japanese Mangas there is a kind of ‘where-do-you-want-to-go-to’ door. You decide where you would want to go, step through this special door and you are there. This would be a great thing to have – I could have a beautiful house anywhere in the world, maybe on a nice island, and sleep there every night!”

Yes, that was his joking answer. And Sauber printed it. A nice counter to how some other drivers’ statements earn reaction, huh?

While Renault was the obvious big surprise this past season, Sauber’s making it through the year might be one of the top 5. I certainly hope the team finds some magic in that car and among its driver line-up. It would be great to have Sauber and Williams battling it out in 2011, perhaps along with Force India again?