Summer break is over. the cars are fired up and the Formula 1 circus is in Belgium for the Belgian Grand Prix. Racing at the mighty Spa Francorchamps is a highlight of the season but it’s made even better if you can qualify well on the longest track on the F1 calendar.

If Friday and Saturday testing sessions are anything to go on, Ferrari is feeling positive and with Lewis Hamilton hitting the wall in FP3, there was some question as to if the Mercedes driver’s car would be ready in time for Q1.

The stoppage did give Mercedes more time to put Hamilton’s car back together. Meanwhile, a scrum had assembled in front of Charles Leclerc’s Ferrari as an FIA person and the team huddled to block the view of a front wing discussion (perhaps a wing adjustment that required FIA oversight).

With 13 minutes to go in the session, Lewis Hamitlon’s car was started and queued up to set a time. He joined the 19 other cars and none of them had set an initial time with just 11 minutes left.

Max Verstappen set out for a hot lap but radioed a problem with his car but stayed out and it’s a long lap so doing laps trying to sort out the problems is a dangerous endeavor. Meanwhile Hamilton set a fast lap.

Ferrari’s Leclerc and Sebastian Vettel jumped to the top two positions ahead of the Mercedes of Valtteri Bottas and Hamilton. Verstappen boxed and seemingly wasn’t able to cure his engine issue during the additional lap. This gave the team 7 minutes to fix the issue and Max to set a fast lap in Q1.

With 2:30 left in Q1, Verstappen set out for his fast lap. He come upon quite a bit of traffic and they were all moving out of his way. As such, he jumped up to third quickest as Antonio Giovinazzi’s Alfa Romeo stopped with a smokey engine issue by the second pits area just after La Source. This caused a Red Flag ending the session and costing Carlos Sainz a shot at Q2 but McLaren weren’t expecting to be massively competitive at Spa. Even so, it was the first Q1 elimination for Carlos since the Australian GP. 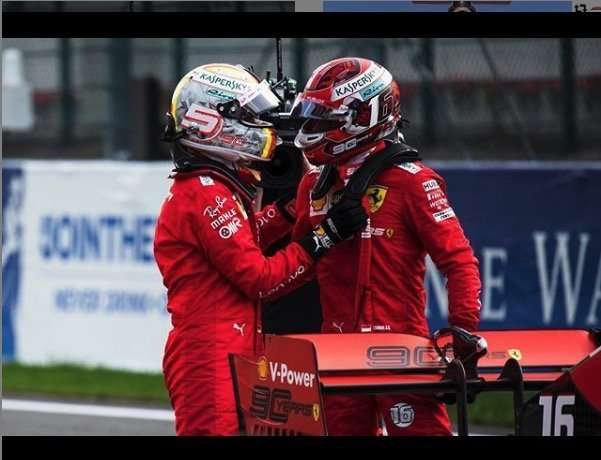 Perez had a very quick S1 time but initial runs put Hamilton and Bottas just behind the two Ferrari’s of Leclerc and Vettel respectively. Intriguingly, Hamilton was just 0.216s behind Vettel so the idea of a dominant advantage for Ferrari was clearly Mercedes being reserved on Friday.

With 7:20s left, both Racing Point cars were running 8th and 9th and Sergio Perez was running a previous spec engine due to his Mercedes blowing up on Friday. Stroll, with a new Mercedes engine was trailing Perez who may have been buoyed by a brand new 3-year contract with the team.

Having won several times at Spa, Kimi Raikkonen channeled his love of this circuit and was running best-of-the-rest with just 5 minutes to go in the session. He did so with a new Ferrari engine but certainly some concern as his teammate, Giovinazzi, experienced an engine failure in Q1.

Alex Albon got out of his car because he had an engine change and was going to start from the back of the grid anyway. Saving engine mileage and stress seems to be the prudent move and focusing on getting Max in the top three was a priority at this point but with just 2 minutes left, Verstappen was still sitting in the garage but had enough time to advance to Q3.

McLaren, currently running best-of-the-rest, was hung out to dry while Renault put in a resurgent performance on this power circuit to get both cars through to Q3 and challenge for the best-of-the-rest.

Can Mercedes turn the wick up and take the fight for pole to Ferrari? They most likely could but how much would they? Two Mercedes engines blown so far in the weekend, will they gamble? Could Kimi Raikkonen best the Renault duo for best-of-the-rest in Q3 or will Sergio Perez make it difficult for both Alfa Romeo and Renault?

The cars began stacking up with Daniel Ricciardo, Max Verstappen, both Mercedes and both Ferrari’s all bunched up and they all had to move out of the way for Raikkonen who was on a hot lap. By the time the Mercs and Ferrari’s began their initial laps, tire temperatures were down and Lewis wasn’t happy with all the stacking and jockeying for position.

The Ferrari’s were split with Leclerc jumping to provisional pole and Hamilton second. Vettel’s hot lap started with a lock-up at La Source and he slotted in third with Bottas behind him. Verstappen managed 5th quickest and it was Ricciardo running best-of-rest in 6th.

Leclerc and Vettel make it a Ferrari lockout of the front row with Hamilton and Bottas on row 2 and Verstappen with Ricciardo on row 3. Pole position for Charles Leclerc.