If there is a recurring theme to Charles Leclerc, it might be his ability to evolve into the driver he needs to be in the car he has been given. There have been a few mistakes since the 2019 season started but Ferrari are impressed with the pace of Leclerc’s progress within the team.

“If I look at the first half of the season, I think [it’s] very positive, the way how Charles is growing,” Ferrari boss Mattia Binotto said.

“He’s a talent, we knew it, but I think he’s really learning from mistakes and that’s more important. Even his collaboration with the team, his way of supporting the team in the development of the car, is improving race by race, day by day, that’s another positive of the first half.

“I think if there’s anything that’s surprising us is how much he’s improving through the races. And I think race after race, his weekend is becoming more solid and solid, and I think he can even do better than what’s he’s doing.”

It’s one of the things we notice last year about Leclerc, his ability to adapt. You’ll recall that the first 4 or 5 races with the Alfa Romeo team were difficult as Charles was learning as quickly as he could how best to drive the car, manage the tires, brake late enough and maximize the package.

Within a few races, it all began to turn around. He had assessed all the fine details of his style to maximize the performance of his car and began producing good results. This is very much what we are seeing at Ferrari. Sure, there have been mistakes and he’s paid for those but on paper, Charles is the highest ranked driver when compared to the percentage of points he has to his teammate. 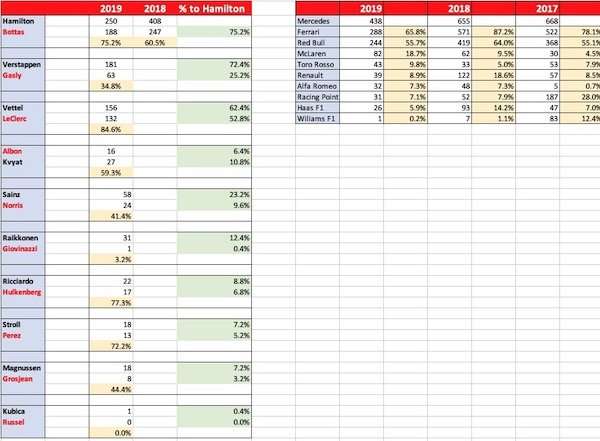 Leclerc has 80% of the points Sebastian Vettel has and as his race pace and qualifying develop, he may close that down or even surpass Vettel. Time will tell. Still, it’s asking a lot of the young man to lead the Ferrari team in points in just his first season there and as much as people like to put a nail in Vettel’s career, the 4-time champ still delivers.

It takes a special kind of driver to asses what they have in a particular car, develop a style around that car that maximizes the performance output and evolves into the driver the car, tires and team need for the season. This is a strength of Leclerc’s and I think Ferrari have to be excited about his performance so far in 2019.

Leclerc is impressing me more than any other young driver out there. Yes, we can argue that Verstappen has been the most impressive and he was better in the junior formulas etc., but people can have an opinion, even though mine is biased – I’m a Ferrari fan. Lol. The way Leclerc displays a great level of maturity for such a young driver is what impresses me the most. Also, I think there’s much more of him to come. We’ve seen Verstappen’s brilliance during a longer period in F1 and many times he’s been reckless. Leclerc has already matured in… Read more »