Lessons that motorsport can learn from Rosetta and Philae

There are a lot of political speeches that we’re subjected to during our education, and others that, because of their importance, we see over and over again on TV or hear on the radio. Some of them are important because of the political climate of the time such as the Gettysburg Address, while others are important because of the larger message they deliver. I don’t want to get into the politics of whether JFK was a great president or not here (or anywhere on the internet for that matter), but there is part of his speech at Rice Stadium about the US commitment to the Apollo program that has always stuck with me.

“We choose to go to the moon in this decade and do the other things, not because they are easy, but because they are hard, because that goal will serve to organize and measure the best of our energies and skills, because that challenge is one that we are willing to accept, one we are unwilling to postpone, and one which we intend to win, and the others, too.” — Pres. John F. Kennedy at Rice Stadium, September 12, 1962 [emphasis is mine]

That philosophy of striving for that which we know to be difficult and challenging, precisely BECAUSE it is difficult and challenging is one with which we are losing touch as a society and especially in motor car racing. I’m not saying that racing today isn’t difficult. It most certainly is, but we’re not pushing the limits of man and machine, doing what others thought impossible, and expanding the boundaries of what is possible. Those of us of a certain age will most likely recall that one of the things that drew us to motorsport in the first place was the exotic solutions engineers would deliver to the track and the brave drivers would pilot them successfully and skillfully in spite of what people at the time knew was impossible. 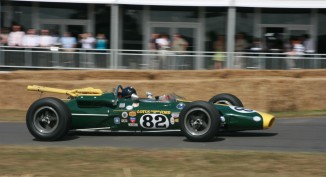 For some examples, think of Jim Clark and the rear engine Lotus 38 that completely changed competition at Indianapolis, or the turbine car “Silent Sam” Parnelli Jones strapped himself into and nearly won the 500 except for a $5 bearing, or the championship-winning AWD Audi Quattro WRC car piloted by Michèle Mouton when everyone knew that four-wheel drive systems were too complex for rally racing and would fail. The engineers, designers, and drivers chose to design, build, and race those crazy machines, not because they were easy, but because they were hard, knowing that if they were successful, the result would change the face of the sport. We watched those magnificent machines succeed and told failure to suck it. It captured our passion, our enthusiasm, and our loyalty as fans.

When we look at the landscape of motorsport today, there has been a disturbing trend toward constraining the ability of teams to develop unique and creative solutions to the problem of going fast to the point where the cars look nearly identical if not actually being identical. I get the whole cost cutting thing, but that’s usually a red herring. Just look at Formula 1 over the past couple of seasons. Their efforts at cost containment has actually resulted in the escalation of cost and the reduction of competition. The telling moment that Formula 1 was headed down the wrong path was when the best and most creative aerodynamicist on the planet, Adrian Newey, walked away from the sport claiming that the regulations were not allowing him to do his best work.

IndyCar has been stuck in the quagmire of spec racing for years, and although there are two engine manufacturers, the permitted design is extremely restrictive. The chassis themselves were precisely spec. Teams were required to use the Dallara IR-12 (aka DW-12) platform and no other. This next season, they’re going to be permitted divergent aero kits, and the spec is reasonably open. It will be interesting to see what Honda and Chevrolet bring to the track. Cost cutting rears it’s head again in that mid-season development is prohibited. At some point IndyCar, and Formula 1, need to think about what affects their value over the long term rather than on a season-by-season basis. What will bring fans, what will drive public interest? I say daring to do the things that are hard and have a risk of failure is the right way forward. It always has been. To quote the Bard, “A coward dies a thousand deaths,” and so does a a team or company playing prevent defense.

So how does this all relate to a small robot landing on the surface of a comet out beyond the orbit of Mars? NASA passed on the Rosetta mission. The idea, when first pitched, was considered too risky, too difficult, with too large of a chance of failure. They chose to turn a deaf ear to JFK’s mandate. The European Space Agency looked at the program and saw opportunity. It took ten years for the Rosetta probe to get to Comet 67P (I know, sexy name, right?), but when it did arrive, the payoff was huge. The data from the Rosetta orbiter has revolutionized the way we view the dynamics of comets. A couple of months ago, no one would have dreamed of seeing sand dunes on the surface of a comet, yet there they were in Rosetta’s images. This past week, the mission tried for what seemed a near impossible feat: soft-land a probe on the surface of a comet no larger than the downtown area of most cities. On an object that small, you could jump and achieve escape velocity.

The twittersphere was buzzing with chatter about this mission, about comets, and about our potential to do great things. Here’s what J.R. Hildebrand tweeted about the Rosetta/Philae mission.

@JRHildebrand
Remember how curious you were when you were a little kid? Space is one of those topics that still ignites a primal sense of wonder… (cont)
…which is why I think it’s exciting to see such a push in space exploration. If we inspire curious minds, big solutions aren’t far away…

This is where motorsports can take a lesson. “If we inspire curious minds, big solutions aren’t far away.” If engineers in motorsport were never permitted to exercise and demonstrate their prowess and creativity, we wouldn’t have ABS, AWD, torque vectoring, paddle-shifters, active suspensions, and a whole host of other driver aids and safety equipment we enjoy in our daily drivers. If we choose to continue down the restrictive path of cost-cutting and attempts at constraining what teams can develop, then we doom ourselves to mediocrity and irrelevance. If we instead choose to do the hard things, the difficult things, the exciting things, embracing the potential for failure, we will surge forward. Clever designers and engineers will craft the magnificent racing machines that push the limits of what is possible, sparking the imaginations of the young fans that will be the next generation’s designers and engineers who will go on to push what we can do even more. The big solutions are out there, but as JR said, we must inspire the curious minds if we are to discover those solutions.