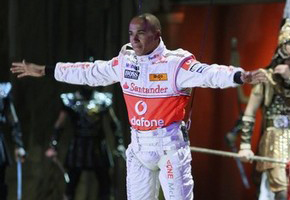 Oddly, Lewis chose to participate in a Turkish theater play where he flew on wires over the stage dressed not in the Trojan garb of the actors, but his vodafone drivers suit. The Times carried the story in which a very astute reporter said:

The horse Hamilton should be worrying about, though, is the prancing one of Ferrari. He’s already nine points off the pace set by their world champion, Kimi Raikkonen.

With that said, it appears Lewis even felt a bit odd…

‘That was a bit weird. What did you guys think?'”