Pirelli waste little time in getting ready for 2017 with tests in Fiorano today in a 2014 Ferrari driven but Jean-Eric Vergne (JEV) and earlier in a GP2 car at Mugello in the hand of former F1 drivers Pastor Maldonado and Giedo van der Garde.

Pirelli’s test with Ferrari is using the F14-T and is part of their expanded tire testing program in order to get ready for the new 2017 regulation changes. The tests will include 2017 compounds in 2016 tire sizes and while the teams who are donating the car would prefer their drivers at the wheel, the thought is that Pirelli will eventually get a mule car that Pastor or Giedo could drive.

Speaking of tires, as the teams head into the Spanish Grand Prix, there will be a different strategy on hand for Mercedes and Ferrari. The former has chosen seven soft compounds while the latter has chosen eight.

The compounds on offer for the weekend are Hard, Medium and Soft and very few teams are option for more than one set of the Hard compounds. The new tire rule has added some strategic elements to the first three race but Russia, in my opinion, could have used the Ultra-Soft compound instead of the medium.

There will be tracks where the new tire regulation and true option doesn’t really play out very well. Russia is a good example in that the Soft and Super Soft were the compounds of choice and the Mediums were ineffectual. Spain may be the same and it’s to be understood as some tracks simply aren’t good candidates for the Ultra-Soft given their abrasive characteristics.

In Russia, it was a one-stopper and most opted for Super Soft to Soft choices. Look to Spain to be a Soft to Medium strategy. 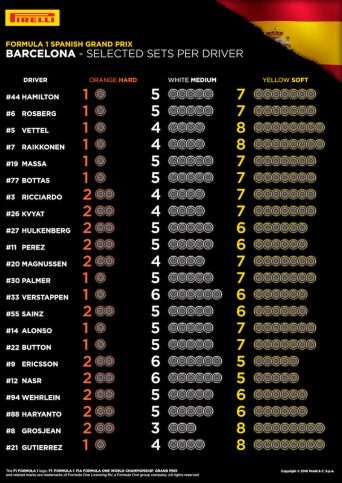 Couldn’t think of a better man than Maldonado to test degradation of anything really.

Cracking up man…too funny! Love it.

i sincerely hope that Maldonado’s effort won’t lead to more deaths since pre-1994 F1 days … ON STEROIDS! If that happens, please tell maldonado to go stick his head into the nearest tar pit and stay there.

1 step closer to being a race steward.

Ah, so that’s what happened to Pastor! Good to see he’s found something to do to give back to motorsport. Raceable tyres should be appearing soon, which can only be a good thing.

Perfect choice – all alone on the track. What’s he going to hit… no wait! There’s Armco… darn.

This can only lead to bad press for Pirelli. Armco doesn’t jump so he will have to blame the tires if he crashes.

Time to fire http://hasmaldonadocrashedtoday.com/ back up again