There was a time in mid 2014 when Marussia F1 began to buckle at the knees due to a lack of cash resources. Having slid into receivership, the team was saved, as one escaping through flames, by Stephen Fitzpatrick of Ovo Energy. The new team was re-branded Manor Racing and they held a key championship point in 2015 that secured 10th in the Constructor’s Championship.

That point was crucial for a prize money payout of millions but it had to be defended in 2016 in order to reap serious cash and unfortunately Sauber’s last gasp in Brazil wrested the coveted 10th place away from Manor with devastating effect.

According to report, Manor is now in full receivership and unless investors can be found quickly, the team will most likely fall from the Formula 1 grid in 2017. I suspected this might be the situation, as I am sure you did as well, but the talk in Abu Dhabi was that the team had engaged and entity for acquisition. Apparently that didn’t go through.

“The decision comes after several months of discussions with investors in an effort to secure the best future for the team: discussions that had recently progressed with a particular investor to the signing of heads of terms.

“Unfortunately, the investor was unable to advance a final agreement in a timescale that would have avoided impacting upon the team’s 2017 racing programme and the directors have had no alternative but to place the team in administration.”

“The team has made significant progress under its new ownership since the start of 2015, the highlight of which included securing a constructors’ championship point in the preceding F1 season, but the position remains that operating a F1 team requires significant ongoing investment,” he said in a statement.

“During recent months, the senior management team has worked tirelessly to bring new investment to the team to secure its long term future, but regrettably has been unable to do so within the time available.

“Therefore, they have been left with no alternative but to place JRSL into administration.

“The joint administrators are currently assessing options for the Group.”

As for Manor making it to the grid in Australia? Rowley said:

“The team’s participation will depend on the outcome of the administration process and any related negotiations with interested parties in what is a very limited window of opportunity,” he explained.

“No redundancies have been made following JRSL’s entering into administration and all staff have been paid in full to the end of December.

“The ongoing staff position will however be dependent on whether new investment can be secured in the limited time available and the joint administrators will continue to review the ongoing financial position.”

I had a feeling that’s why Pascal Wehrlein moved to Sauber even though they do not use Mercedes power units but I didn’t want to say anything or be cheeky however, if you listened to our new year resolution podcast, both Grace and I said the same thing…the team show up on the grid.

As our own Tom Firth pointed out to me, the Going Concern portion of Manor’s business model was very reliant upon Fitzpatrick and it seems his money has run out…or at least his willingness to continue to pour money into the team. 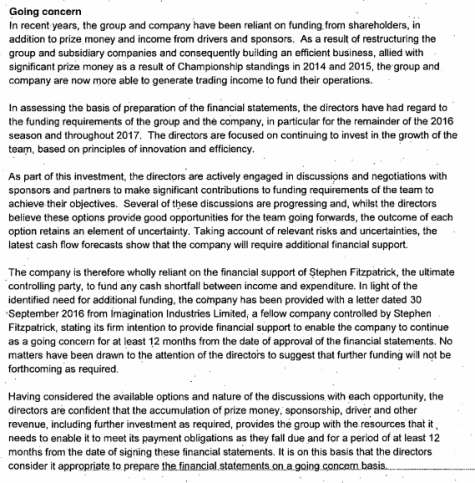 It’s another unfortunate situation as Manor is the last of the three teams that entered the series under the cost-reduced series that then FIA president Max Mosely tried to initiate. HRT, Caterham and now Marussia/Manor seem to be footnotes in F1’s graveyard of teams who tried.

“When I took over the team in 2015, the challenge was clear; it was imperative that the team finish in 10th place or better in 2016,” Fitzpatrick said.

“For much of the season we were on track. But the dramatic race in Brazil ended our hopes of this result and ultimately brought into doubt the team’s ability to race in 2017.”

Well this is what Bernie wanted isn’t it. He always complained about having more than 10 teams on the grid and has passive-aggressively only paid the top 10 teams out of 11/12 (gets to pocket an extra bit this year too with HASS). I just wonder how Liberty feels about this?

And did the Indian government ever catch up with VJ?

Not that I recall….