Perhaps inspired by the incredible Tour de France and performance of team Astana with Vincenzo Nibali dominating the 101st edition, Mercedes AMG Petronas took to bicycles for a team-building event in Austria with bad results.

According to reports, team boss Toto Wolff and technical chief Paddy Lowe were both injured in a chain reaction crash with Wolff suffering the worst of it. While Lowe escaped with some cuts and bruises, Wolff spent the night in hospital with a broken wrist, elbow, shoulder and collarbone.

The team were riding along the river Danube in Vienna when the crash occurred. The team tweeted:

“A bit of a carambolage during yesterday’s bike ride resulted in a fractured shoulder, collar bone, elbow and wrist,” Mercedes tweeted. “But as the big man himself said, “Racing is a State of Mind”!! #Totonator”

Susie Wolff tweeted an update on the Totonator: 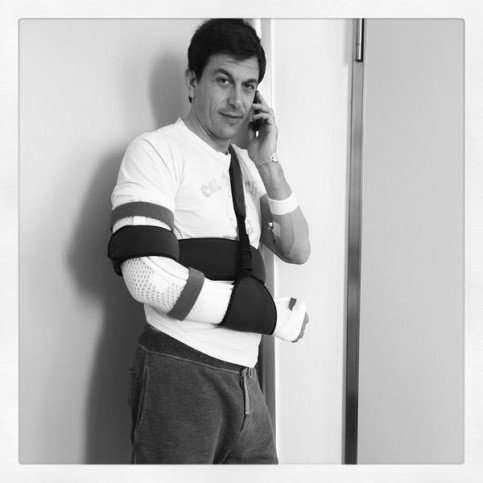