The 2019 Formula 1 season officially got under way in Australia and the teams ran through qualifying and race strategies as well as assessed new bits and bobbles they brought to the Melbourne circuit based upon the winter testing data.

Winter testing suggested that Ferrari had the upper hand over Mercedes and if that’s still true, they’ve yet to show their hand in the first two practice sessions. In fact, Mercedes look to have picked up exactly where they left off last year.

One thing that Friday’s practice sessions did suggest is that the time differences in the midfield are possibly very close. Renault is a team you’d expect to be running toward the sharp end of the midfield but so is Haas F1 and the team seemed slightly off the pace. Will they recover on Saturday to run with Renault?

The midfield ebbed and flowed throughout Friday with Toro Rosso running well and even McLaren in the mix and Alfa Romeo doing quite well. Racing Point and Williams were slightly more concerning.

One of the key issues is how well the race pace runs were and Ferrari’s Charles Leclerc was setting very consistent times but slower than Mercedes driver Valtteri Bottas. The Ferrari seemed well balanced while the Mercedes was a little more pointy and stiff at the front end and that does raise a concern over tire wear.

Another key issue is just how competitive the new Honda power unit is in the back of the Red Bull cars. They ran toward the front, sounded different than they did last year and seemed to suggest that they indeed have the pace to be competitive if not better.

The second session was ripe with differing race preparation runs and with Red Bull, Ferrari, Renault and Alfa Romeo nearly a second off the Mercedes pace seemed to suggest that they were holding back and waiting for Saturday or Mercedes was the biggest sandbagging team of winter testing.

Did the Friday session show us more than we learned in winter testing? Yes but I’m not sure it has shown us the ultimate pace of Mercedes, Red Bull, Ferrari, Renault or Haas. Time will tell. 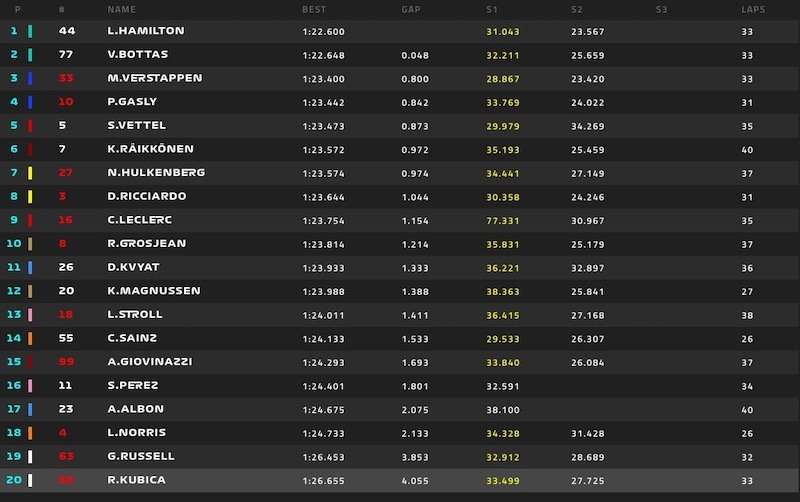 The Mercs just looked fast and ‘tidy’. Mind you so did the Haas.

Jesus, the Williams cars are two full seconds off of everybody else’s pace. Hopefully that’s just growing pains as they gather data and dial in setup on the new parts they frantically fabricated since winter testing.

For what it’s worth, the 107% threshold at Australia would be a little over 6 seconds off the leader, so Williams is safe on that front unless they turn in a truly wretched qualifying session. Still, it says a lot about how pathetic they are that it’s actually worth calculating whether they’ll be allowed to race. It looks like the gap between Williams and second-to-last is about the same size as the gap between Mercedes and second-to-last, which is pretty amazing.

If the race tomorrow goes like FP2, then the yawning can start… that’s the bad news.
The good news? No one will care about 1st and second but there will be tons of interest in the also-rans. Kimi & Gasly & Daniel to the rescue!

Previous article
Remembering Charlie; what next for the FIA?
Next article
TPF Track Talk: Australian GP