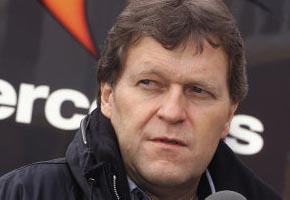 A magazine called Focus out of Germany said that the Mercedes board narrowly voted to remain in F1. This started rumors around the globe about their commitment to the sport which in turn launched the news hounds at Autosport to make inquiries.

“There was no voting by the Daimler board of management concerning Formula One, Apart from this, it is correct to say that we continue our commitment.”

That’s good news for Ron, Martin, Lewis, Heikki, Norbert, Vijay, Pedro, Fisi, Adrian and Grace. Let it be known that Mercedes is a large part of the F1 machine and their involvement is crucial to the success of the series. The ever-diligent Norbert Haug is a terrific motorsport boss for the German maker and I think remaining in the series for his sake is reason enough as Norbert has a big fan club here at F1B. Not to mention he looks good in McLaren team garb (those McLaren people-eating jackets have never looked so good).

Apparently the Merc board has not heard Bernie’s warning and advice that they will suffer this year but they need to remain patient. There is more to life than just selling cars and while Mercedes may not think so, Bernie has plainly made that evident. Things like sanctioning fees, Television rights, CVC, large loans with high interest rates, divorces, off-shore accounts, regulations and Max. Merc would do well to remember this when grousing about their lack of cars sales. Patience people!