This season, Paul and I have had a lot of fun with our competition between Sauber drivers. The fact is, you don’t Eff with the Swede! The reality is, both drivers did a decent job in a car that didn’t. Felipe Nasr has the distinction of delivering the only points the team scored in the 2016 Formula 1 season and that’s huge! To the tune of $13.5 million.

Thanks to F1.com, the driver ranking in a head to head format has the stark reality of the two drivers against each other: 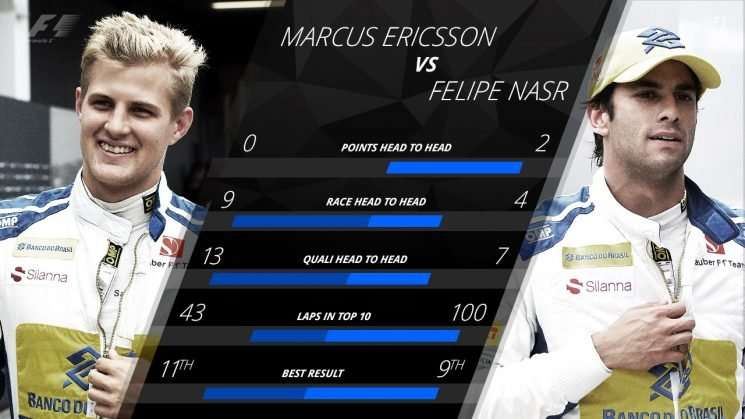 Nasr’s loss of big sponsorship is not helping his chances of retaining a seat at Sauber while Ericsson is set to drive on. If you had a championship of words and personal brand positioning, Nasr would win that hands down. Of course Ericsson doesn’t need to position himself as he has a ride…becasue, as you know, you don’t Eff witht he Swede!

Felipe told Autosport that he feels he’s done enough to retain the seat at Sauber for 2017:

“I feel like I did everything I could to deserve a place,” Nasr said.

“I have been able to deliver the results that I think Formula 1 is looking for.

“In my first year I scored 27 points for the team, which put us ahead of McLaren last year.

“This year even with all the difficulties we faced, every time I had an opportunity in the race to take it we came very close to [score points] and in Brazil, we did it.

“Just putting in a balance over two years, I was there to deliver what the teams are looking for.

“So obviously I would be pretty disappointed if we’re not here next year.”

That’s some serious brand positioning from anyone’s measure but it actually gets better as he drives home the points he delivered the team as an alternative infusion of cash now that his sponsor has left him:

“I would say this counts a lot,” he said. “I’m giving the team an extra boost for ’17, we know how much that prize money counts.

“It’s the best ever budget I could find the team.

“There’s no other such sponsorship better than this, which is delivering results.”

That’s terrific! It’s a sort of, “yeah, I don’t all the cash I used to have now but hey, I just delivered you $13.5 million in prize money so where do I sign?” kind of statement. The bigger question might be, did Banco du Brazil actually bring more than $13m to the table? If so, then he’s still short a few bucks.

According to the article, Nasr is engaged in talks with Sauber and Manor for a ride but behind Pascal Werhlein and Rio Haryanto in the process.

Love to see him in the merc. Wouldn’t that stun the F1 world.

I think Werhlein is going to Mercedes (although I don’t think he deserves it – just the matter of right place – right time) and if Hayanto beats Nasr to the seat, than that’s an incredible shame and a slap in the face!