I have no idea who Nikita Mazepin really is beyond being a Formula 2 driver with a very wealthy father and the newest driver for Haas F1 in 2021. I don’t “hang’ with Nikita nor do I know what he is like personally.

What little I do know about Nikita is that he seems to be decent driver who brings significant investment to Haas F1, via his father, and that’s a much-needed element to keep the team going. Well, that and the new budget cap coming soon.

The sport is ripe with paying drivers and we’ve discussed this before on many occasions. Niki Lauda and Ayrton Senna were paying drivers. The sport is possibly saying goodbye to Sergio Perez and he was a paying driver. The outrage by some that Mazepin bought his seat falls on deaf ears these days because the series thrives on paying drivers in the smaller teams.

It isn’t just Nikita’s wealthy father and the act of buying a seat that has a throng of people outraged, no, it is a video that was posted to Nikita’s Instagram account showing him grope a female in the back seat of a car he was riding in.

The video has since been removed but the outrage has not. A person named Bradley over at Jalopnik was so outraged that he wrote an entire screed mustering up the F-word and some vitriol for Nikita. What Bradley’s post did not include  was the actual apology from the woman in the video who is a friend of Nikita’s. The NY Post had the apology:

“Hi guys, I just want to let you know Nikita and I have been good friends for a long time and nothing from that video was serious at all!” Instagram user almadelcaribe, who has been identified by multiple outlets as the woman involved, wrote on the social media site.

“We trust each other so much and this was a silly way of joking between us. I posted this video on his story as an internal joke. I am truly sorry. I can give you my word he’s a really good person and he would never do anything to hurt me or humiliate me.”

Now let’s be honest, apology or not, its not the kind of video you want posted to your account after you’ve just signed a contract to race for Haas F1, that’s for sure. Nikita realized it and posted an apology of his own which Jalopnik dismisses.

“I am sorry for the offence I have rightly caused and to the embarrassment I have brought to Haas F1 Team,” Mazepin wrote. “I have to hold myself to a higher standard as a Formula 1 driver and I acknowledge I have let myself and many people down. I promise I will learn from this.”

Haas F1 called the actions “abhorrent” and said they were dealing with it and so they should but like all things, there is context to the story that a 10-second video clip may miss. Namely that Nikita and the woman are friends. Maybe you don’t grope your friends, I certainly don’t, but perhaps they do and perhaps she gropes him and vice versa. Who knows? Does Jalopnik?

The comment section of the Jalopnik article reads like a chamber of virtue vapor where each comment tries to one-up the previous in its virtuous rancor. All the while, the ad at the bottom of the Jalopnik website just below the comment section has clickbait showing women and their breasts. No doubt Jalopnik is accusing Nikita of sexual assault while digitally groping woman in their clickbait ad section…got it. How’s that for one-upping the virtuous rancor? See? Even I can muster up some outrage at Jalopnik for exploitation. 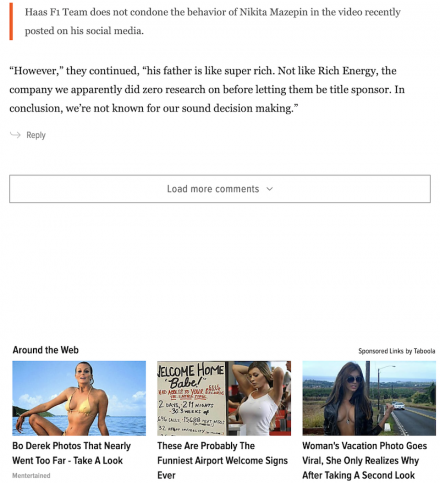 As I said, I have no idea who Nikita Mazepin really is. He may be a nice person who was caught up in a scandal with a close friend who clearly supports him regardless of his actions or he may be a womanizing jerk. I have no idea but I don’t think Jalopnik does either. What it does have is opinions about Nikita’s money, buying a seat and groping. It slams Haas F1 for continuing with Mazepin and certainly seems to have issues with his father’s wealth.

I read today that Haas F1 team boss Gunther Steiner is addressing the situation but in the end, it sounds like it is an internal issue and not one that Steiner would like to negotiate on social media. Autosport had the story.

“Yes, I can make an objective assessment, obviously,” Steiner said.

“But as I said, I will deal with that the coming week. Maybe you guys will never know what was dealt with, and what are the circumstances, because I will keep them private.”

“I don’t think it’s about my personal reaction,” Steiner said.

“My first things was, I looked into it, and I had no reaction, because I need to stay objective. So I have to have no reaction to it.

“I need to get the facts together, speak with people, speak with the people involved and speak [about] how it happened. And then I can make my assessment.

“It doesn’t get to me personally at that moment. I cannot do that, because then I’m not objective anymore.

“I need to be objective about everything in these things.”

Nikita’s apology didn’t include an apology to his friend, the woman he groped, but to Gunther’s point, there is context and he wishes to get to the heart of that context despite the critical reaction from posts such as Jalopnik or others.

Posting a video of yourself groping a female friend is just bad on many levels. First, groping your female friend and second, posting a video of it. The issue is, what will Haas F1 do, if anything, and is the fact that the video was made public mandate that the resolution will equally be made public? It seems to be an internal matter between the team and the people in the video.

I think the reaction of the mainstream is totally off the mark. We all should be making fun of this kid for acting like a dumb fraternity jock, but “ abhorrent “? That’s way too far.

…..and that, ladies and gentlemen, is why you check things thoroughly before you accept anything from anyone. Even if it wasn’t serious, this is not the sort of thing you post. I guarantee you, even if >I< posted something like that as a joke, I’d lose my job,