And apparently so does Ferrari’s pride. Virtually all the time. Even when I’m on their side â€“ and let me say again for the record I think the Hockenheim team orders “scandal” has been blown out of all proportion â€“ those PR wizards at Maranello still find a way to irk me when making their point.

Also for the record, I have never been a fan of Ferrari’s ‘Horse Whisperer’ blog (though I understand that many people are), but for me, this week’s outburst was an all-time low.

Ferrari smash Williams over the Schumi comeback plans last year, that’s basically understandable. Then they turn on Max Mosley and, by extension, the new teams â€“ again, I don’t agree, but I understand. But a double Ferrari World Champion? Come on!

What did Niki Lauda ever do to the Scuderia? And much more importantly, what didn’t he do for them?

At the end of the day, all Lauda really did was offer his opinion on the German GP when asked for it â€“ and with considerably less bile than the run-of-the-mill Horse Whisperer post, it should be noted.

Personally, I disagree with him as well, but I’m not sure his comments warrant a full-on attack on everything that is Niki Lauda. And it certainly doesn’t justify one from a former employer, on a driver who secured 15 wins, 32 podiums, 23 poles, and two world championships for Ferrari. 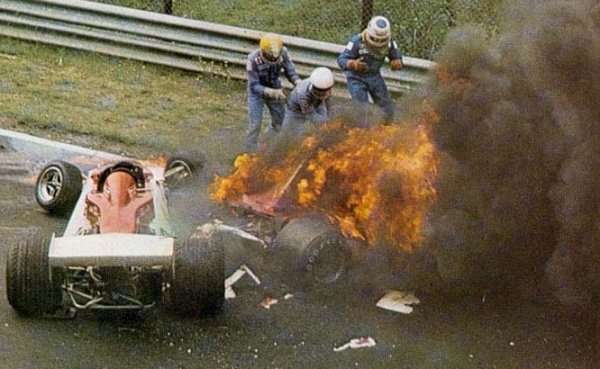 Without Lauda’s 1976 injury at the NÃ¼rburgring (you remember, the one when he nearly died in a fireball and sustained that terrible scarring, while driving for Ferrari) it would have probably been three championships on the trot â€“ but even without that title, Lauda is second only to Michael Schumacher in terms of bringing silverware to the Scuderia. And yet all Ferrari can do now is imply he only achieved this success because of team orders.

Talk about biting the hand that feeds! (Or at least fed.)

As if to ram home the point that Ferrari are crapping all over their own doorstep, they’re kind enough to post a dramatic photo of Lauda on one wheel in his champion’s number 1 Ferrari â€“ driving a red car beyond the limit in search of glory, as he did for four stellar seasons in the ’70s.

It’s almost as if they’re proud of the fact that no one is beyond the Horse Whisperer’s anonymous and therefore rather spineless reproach. At least Lauda was brave enough to speak his mind openly, rather than using a hackneyed pseudonym.

I understand that it’s just some red meat for the Tifosi, and a bid to bring some colour to the mundane world of press releases, and up to a point, I applaud the sentiment. But, for Ferrari’s own sake, the team should retain at least a modicum of respectability and decorum at the same time! (If the Horse Whisperer’s author posted a comment on this site, they’d probably earn a polite reproach for personal attacks and a failure to actually make a valid point.)

Finally, Mr. Wound — meet Mr. Salt…… Mr. Salt is the title of this latest Ferrari diatribe: “Moralists with short memories.” To plagiarise Mr. McEnroe, you CANNOT be serious! If you ask me, more than one “wave of hypocrisy swept through the paddock” recently.

Doctor! Doc—tor! Speaking of which, can we please get back to Rossi rumours now? They’re slightly less stupid.