The news out of South America today was not very good concerning F1 team USF1. Weâ€™ve certainly cautioned folks as to the rumors and innuendos of the stories weâ€™ve seen running rampant and like most stories, they start with notions, assumptions and guesses. Other stories start with facts, phone calls and verification. Two different worlds in discussing the issue. One news, the other gossip. Fair enough, we wade in water both tepid and cool these days.

To recap the story from La Voz del Interio: USF1 driver Jose Maria LÃ³pezâ€™s management, as well as his father, traveled to Charlotte and had a meeting with Peter Windsor yesterday. The reason was to check on progress at the factory in preparation for the 2010 season. It was admitted by USF1 management that YouTube co-founder and investor in USF1, Chad Hurley, had parted company because he was unhappy with the teams lack of progress. LÃ³pezâ€™s management then flew to London last night in order to meet with Bernie Ecclestone and try to find a solution. It seems they are seeking some kind of agreement with Campos Meta for a possible merger with USF1 that would include Hurley’s involvement in order possibly save both teams in one move. 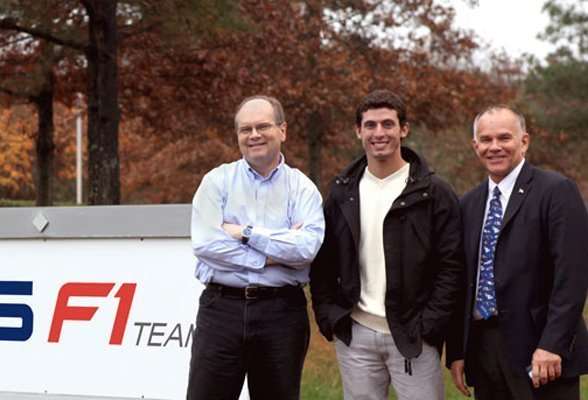 Letâ€™s unpack the merger first: What would a merger bring to Hurley and Campos Meta? From a fans 60,000â€™ view I can see little economies of scale other than USF1 investor Hurleyâ€™s money for Campos. Campos does not need a facility in Charlotte NC, Motorland Aragon, management or engineering. They are attempting to purchase a fully developed chassis from Dallara which is most likely fine as USF1, reportedly, does not have a chassis to bring to the merger.

There are assets that USF1 may have purchased outright that could come in handy for Campos but as I consider the economies of scale on a business level, I can think of very little Campos needs other than USF1â€™s main investor. Please do not get me wrong, if F1 boss Bernie Ecclestone is attempting to orchestrate this merger, he very well could be trying to merge the two teams and seek a collegial atmosphere where the management structure is merged as well to beef up the team and make for a solid foundation. Also, it bears keeping in mind that unless USF1 founders Ken Anderson and Peter Windsor created a Limited Liability Corporation (LLC) and have no capital whatsoever in the project, they may be leveraged personally and have serious legal opportunities or liabilities that have to be managed at this point.

To me the biggest reason for a merger with Campos is to avoid legal issues with Hurley, legal issues with creditors or suppliers and execute what is usually called a limited asset acquisition. The concept would be for Campos to finance the purchase of certain assets of USF1 (most likely funded by an additional investment from Hurley or Jose Ramon Carabante as well as Ecclestone perhaps). Then Campos Meta would acquire certain assets of USF1 but not the liabilities. The liabilities would be left to the company and it creditors to shoulder.

The dodgy part of this is the banking relationship and lease expense the team may have. If they have a bank and a line of credit (LOC) that is extended, this will present problems. Most serious lines of credit are personally backed and I would be amazed if USF1 does not have a LOC that is personally backed. In these deals, the bank is listed as the primary creditor and all other vendors, suppliers or creditors are subordinated to the bank. This means that the bank gets whatever cash and assets remain if a company should fail. All other creditors will fall in line after the bank. In America it would be very traditional to have Anderson and Windsor signatory to a personal guarantee on the bank note. This assumes they didnâ€™t have some sort of funky Hurley-fueled slush fund account they just dipped in to leaving them void of a banking relationship. You can structure these a million different ways.

The lease is another issue for the team. It will be nigh on impossible to get out of. The company will have to stomach that legal hassle and it seems an odd time for the owner of the property to try to sell the building at this time. The long-term lease was something the real estate listing was promoting as a selling point.

No one wants USF1 to fail. We all want them to show up on the grid and I am sure everyone at USF1 wants the same. We all could heed the warning that Bob Varsha gave us in our F1B Downshift episode where he stated we need to have patience with USF1 as it is a huge undertaking. That is true. I doubt Windsor planned on trying to build a team from scratch in a miserable economy and the investor they lost was more than likely a lethal blow. Ultimately I am encouraged that Ecclestone may be involved in trying to save one or both of the teams but keep in mind, there is a Serbian billionaire waiting in the wings and Hurleyâ€™s money with Stefan GP could be a stronger option for the grid than either USF1 or Campos. Ecclestone is ruthless but I the outcome will ultimately be what is best for F1 commercially in Ecclestoneâ€™s eyes. It will not necessarily be what is best for USF1, Campos or Hurley and his cash although Ecclestone will want the YouTube creators dollars fueling the F1 show.

At F1B we want the best for USF1 and all involved but reality is reality and where there is smoke there is often a smudge if not roaring fire. USF1 has chosen to break rule number one in public relations–never ignore a crisis and avoid the press during a difficult time. If the team does fail, I am not calling for Windsor’s head on a platter. It failed. They tried it the best they knew how and it didnâ€™t work. The American landscape is littered with failed companies and that is the price of a free-market system so let us not be too harsh on the potential failure of USF1. Let us instead look to the hope that they will survive and perhaps an F1 team can rise from a nation such as America and deliver the world another Phil Hill or Dan Gurney.

What do you think? Is a merger likely? Is USF1 and only experiencing rogue rumors? Does Stefan GP make a better investment target for Ecclestone? Would the rumored Campos merger combine Carabante and Hurley in a joint venture to be ultimately bought by VW as recent rumors implied?