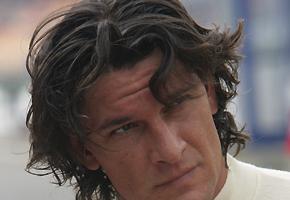 Giorgio Pantano, the 29 year-old 2008 GP2 champion, feels abandoned and overlooked for a seat in F1. In a recent rant on Autosport, he decries the recent interest in Buemi and Senna as well as the current trend of young drivers bringing sponsor money to the team. This has become affectionately referred to as pay-to-drive and has been the model for many smaller teams to take chances on young drivers. Giorgio, it would appear by his statements, has little or no sponsor money or interest in a pay-to-drive situation but as it is the current path to an F1 seat, that may be exactly what he will need to do.

Giorgio has an impressive CV so why is it that he didn’t fair better in F1 from his stint at Jordan in 2004? What is it about Giorgio that has teams reticent to call his name or even test his abilities? Is it money? Is it his age? Is it talent? You be the judge but perhaps some would argue it is a combination of elements that will see Giorgio bereft of a career in F1.

Interesting that Bernie will let him know if anything “moves”.

“I challenge anyone to have a CV as good as mine,” Pantano told Autosprint. “I won two karting world titles, three European, three Italian, German F3, GP2 and was always at the front in F3000. But now I don’t have a seat in F1, is this a joke?

“That’s what it’s like now, if you don’t get in touch with people, no one looks for you. I feel abandoned.

“The only person behaving fairly has been Ecclestone. I called him a few days ago and after ten minutes he called me back. The only real drives still available are at Honda and Toro Rosso. Bernie told me that if anything moves, I’ll be the first to know.

“But I feel total indifference towards me. I read of Senna and Buemi but, really, what have they done? At this point, a guy in my situation must think that being a racing driver is not advantageous, doing another job would be better.”

Pantano believes that a driver’s talent is no longer relevant if he cannot bring substantial financial backing to a team.

“Money is becoming the priority in order to race, talent doesn’t exist any more,” he said. “I think I could still do six or seven years in F1 at high levels.

“I would just like someone to let me test an F1 car. Once the test is done, they’d tell me whether I could be a possible world champion or not. That would give me peace of mind.

“I just want a credible test, a real chance that puts me in the conditions of being properly assessed.”