You can’t but hum that tune when you slide inside an Aston Martin can you? Well I can’t anyway. A couple of weeks back I finally got my hands on one for the first time and a GT4 racing version to boot! 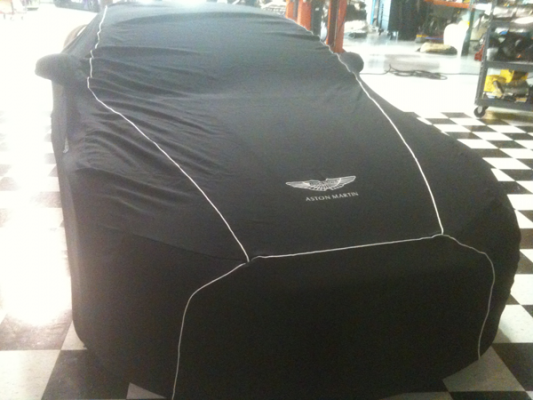 Aston have been sporadic players in the racing scene until recently and the GT4 is a big player and only getting bigger with nearly 100 of them racing across the world. After 40 race wins last year Aston is now getting pretty serious about the US.

Ferrari knows how important the US market is and has supported both ALMS, Grand Am and it’s own gentlemen series “Ferrari Challenge” for many years. The reason I got my hands on one was through the highly successful TRG racing team who are a support for Aston Martin Racing in the US and part of the creation of a potential GT4 spec series in 2014. 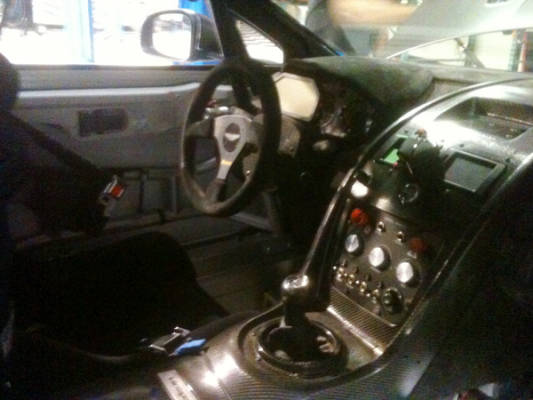 They brought 3 cars to Sonoma and gave us the onus of showing the cars off to prospective racers in the series. The car I got the rights to over the weekend was the “art car”, it may not have shown off the beautiful lines of the Aston as well, but from behind the wheel it was something special. Now these cars are based on the road going version of the vantage but as soon as you clamber in and start looking around it’s all racecar, not many remnants of the plush interior discerning buyers seek for their road going versions, but we wouldn’t want it any other way would we? 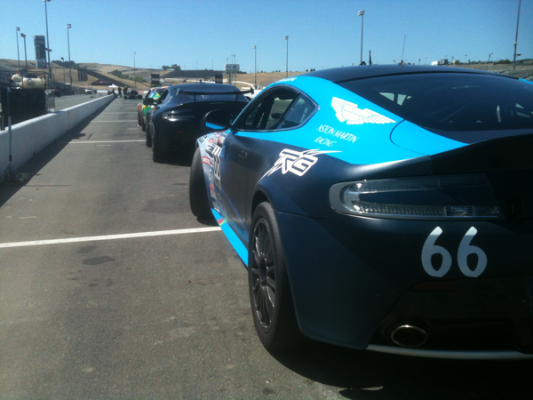 We had 2 versions on hand: a manual box in Grand Am spec & 2 with the flappy-paddle gearbox actuated on the left & right sides behind the steering wheel, upshift on right downshift on left, the dash is still straight ahead but you pegged those dials very quickly so you use the telemetry computer and extremely bright shift lights in the center mounted top of the dash, not a big issue looking across the corner for right handers and in the end not that big a problem through lefts as the brightness could easily be seen in my peripheral vision.

Good or bad the implementation of sequential, steering wheel mounted gearbox might be, the art of shifting has become a lot easier and someone who jumps in from a simulator at home could get the hang of it very quickly, wouldn’t make them fast (thank god) but it would be familiar. 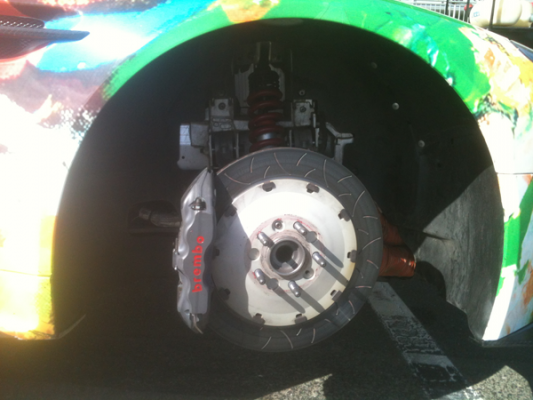 First thing you sense when you jump in is this is a large car surrounding you, inside and out to all four points at the corners, you of course sit low in the all encompassing Recaro racing seat but not as bad as some that I’ve driven where you point of view is the narrow band under the top of the steering wheel and over the dash, not exactly a pleasant way to get to know a new car.

So normal touring car position will work just fine, oh yes. A rather error prone starting procedure where the key must be at accessory 2, then ignition switch then push button start—get it wrong and you have to recycle the computer and start again. It’s not exactly F1 wheel complicated so just something to get used to. 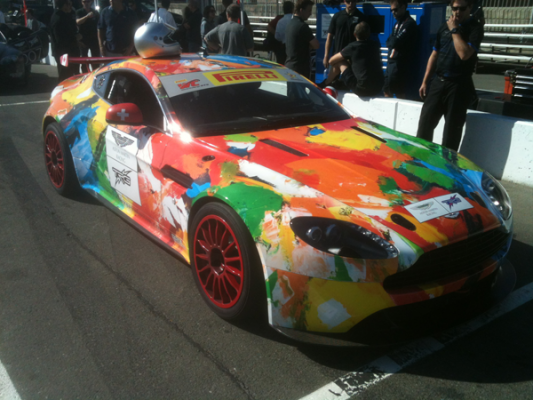 No silly clutches to contend with so turn, flick, push and the 420 hp 4.7 V8 roars to life. Oh what an excellent sound, if you can’t get excited when a race engine roars to life and burbles at idle just waiting for that application of your right foot you don’t deserve to be there in the first place.

So off we roll with no fuss at all down pit lane. The Aston is shod with Pirelli slicks so as always is the case they’ll need some heat in them, so until that point the car moves around a little bit with build up (clag to you David Hobbs fans) and no temp. 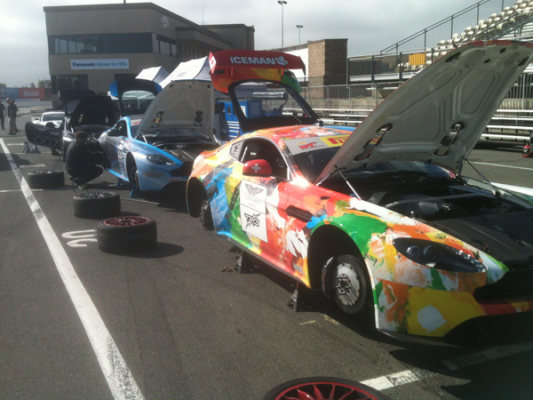 I equate race cars to American football players or sprinters who look a little awkward moving around till they are warmed up and at speed, so the first couple of laps are interesting in a new car because you just not sure where the envelope is. As is normal in these situations the professional driver is expected to get it all sorted very quickly, so luckily I get 3 laps before I have to show this thing off!

Each lap brings a new appreciation of the GT4, of course there’s been lots of jokes about the F1 Pirellis this year, but these big fat slicks give plenty o’ grip. Each lap brings a stronger and sooner application of the throttle and keeps begging for more, the weight of the car feels surprisingly low which allows the short gaps in the six speed gearbox to reach shift points quite quickly, engine power isn’t anything too massive (around 420 BHP) but certainly feels adequate. 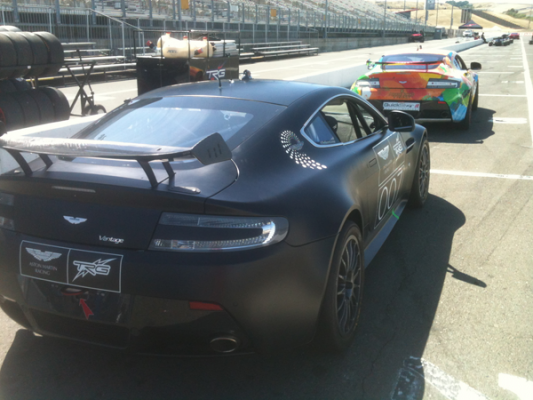 With the Audi R8 I usually drive around Sonoma raceway we only need 3rd & 4th, but here I’m going up and down from 2nd to fifth like a champ and loving every minute of it. The big thing about quick shifting gearboxes these days is the ability to shift mid corner without upsetting the balance of the car, compromising gear choices and ratios has been minimized, so upshifting in the middle of the sweeping turn 5, shifting from 2nd to 3rd to 4th from turn 9 chicane through the ever exciting turn 10 was a doddle.

The brakes are stable and squeal just enough to know your in a racing car, they work very effectively up till the point of when you’re really aggressive where the rear end starts to move around quite a lot, which I did try once into the turn 7 hairpin. It caught me a bit off-guard I’ll admit and probably looked reminiscent of Felipe Massa at Valencia last year, but the good thing is it was easily controlled, so carry on, nothing to see here. 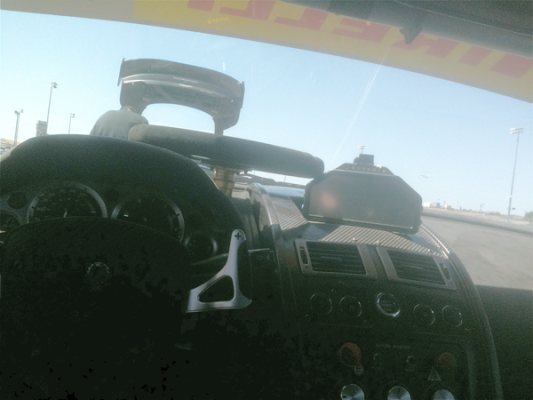 The toughest part of learning a new car and driving in general is confidence in corner entry, which will be the last frontier to complete a strong partnership with a race car. Luckily I got to show Aston Martin’s in house test driver the Sonoma track test before he signed on for duties of shaking down the beautiful GT3 Aston, and rode around for 5 laps as he took the wheel. He didn’t know the track but knew the car very well, so he unknowingly filled in the blanks for me. So each lap after that I felt I could squeeze more and more, and the car loved it and begged for more. 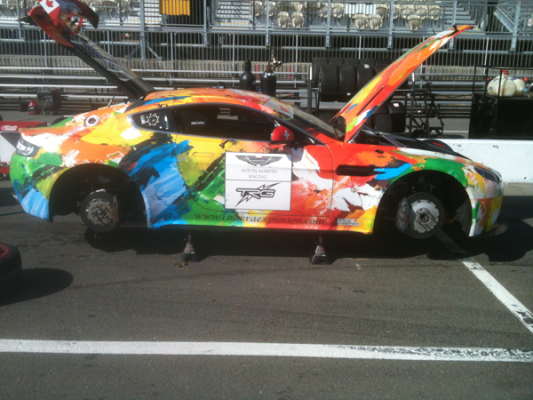 Steering took medium effort and was very precise with the slight turn in understeer, which is a perfect place for the duties this car will have, so very drivable, forgiving and the main thing fun!

Also very importantly they seemed extremely reliable. They just kept the TRG mechanics busy enough with, fueling, tires and a brake change but little else, so a very sorted piece of kit. 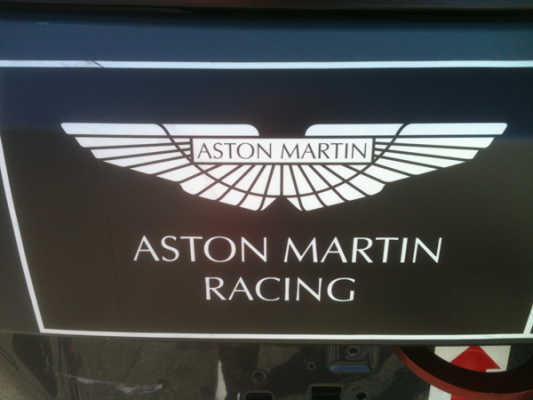 They can come with one of my favourite extras, the inboard jacks, and various upgrades in aero, data and braking packages so as funny as it seems the buying process is not to dissimilar than buying a street Aston. Outside F1 where they build their own cars, most racecar manufacturers are set out this way from Ferrari to Dallara, minus the 100,000 mile warranty of course.

This has to be in the top 10 cars I’ve ever driven. It’s a beast but a friendly one, and in the short time I spent in it I certainly left some on the table but got enough to know I’d love to spend more time getting to know her. Now if I can only persuade Kevin Buckler (TRG owner) to let me into that GT3………….