Perez explains his actions; He shouldn’t have to

The simple truth is that Force India have been doing a lot with very little for a long time and more recently they’ve been doing fairly well with nothing. Like all things that cease to have a revenue stream either through sales of products or services or other people’s money, things come to a grinding halt.

Force India’s troubles are squarely at the owner’s feet, but it was a driver, Sergio Perez, along with a title sponsor, BWT, and an engine supplier, Mercedes, who put them into administration. Now the team’s future will be determined by a court in order to find the best possible solution to keep the team solvent and repay its creditors the millions of Pounds it owes. That’s something the Indian government is trying to do as we speak with Vijay Mallya, one of the owners but in this case, the team is based in the UK and is the collateral securing the debt.

Unfortunately, some of the mobocracy on social media have taken it upon themselves to criticize Sergio Perez for initiating the administration proceedings even though he hasn’t been paid as a driver for a long time. The criticism was so much that Perez felt compelled to offer his side of the story: 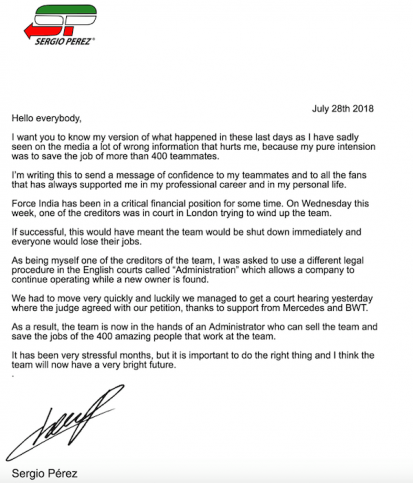 The reality is that perhaps Mercedes were serious when they said a few months ago they’d like to have a Haas F1 type of team to work with such as Ferrari enjoys and everyone pointed at Force India as the obvious choice but it was said that Mallya wanted too much money for the team. Maybe conjoined with Perez, Mercedes and title sponsor, BWT, have made a move to jettison Mallya from his ownership position and work with a new consortium to secure the debt and move the team forward. Who knows? Maybe Mercedes could be involved in that consortium, maybe not. They did own a significant percentage of McLaren at one point in time.

Perez is being backed by supporters and they’ll not be happy that their driver was not being paid and Ocon is a Mercedes protégé so the reality is, Perez may have been the logical prime mover for both Mercedes and BWT.

Had the Perez and other creditors waited, the team may have become insolvent and that’s a whole new can of worms you don’t want to open. The team needed to be saved from a financial spiral that Mallya is heading down and saving himself right now is paramount and that means the team are back burner and there are too many good things going inside this team to let that happen. Mercedes know that, BWT know that, Chase Carey and F1 know that as does Perez. It’s the right move at the right time.

I enjoyed Autosport’s #Actually story but in reality, posting an article about why this is good for Force India, while technically true at this point, is not true in that it should never have gotten to this point. Williams F1 is also in difficult times and if you ignore the impact the hybrid engine had on both these teams that have put them in this position, then that’s your choice but I think it had a lot to do with it or else Mercedes wouldn’t be lined up at the UK Court’s door with a hand out looking for $15M.

Force India’s problems are squarely Mallya’s problems as you mention at the start. I don’t even see the connection to Hybrids when it comes to Force India? Mercedes are a creditor, sure but they would want paying whether it was a hybrid engine or a V12 and would take the exact same action, no? I also don’t understand the idea that Williams is in financial trouble. It’s not competitive, they have average drivers and need to a replacement for Martini, all major issues that need resolving but the group remains profitable at least as of the end of 2017. Not… Read more »

Apologise if that comes across strongly. Just don’t understand how the last paragraph fits personally, happy to disagree though. I agree with the rest around Perez.

I have the feeling that Williams need to make a profit (as the only publicly listed F1 team) has hurt their competitiveness. Force India and Williams have similar incomes, yet last year Force India spent $10-15 million more than Williams and as a result made a loss while Williams made a profit.
The difference in their expenditure could be enough to pay for an experienced driver to aid development. Look what happened when they dropped Maldonado and took on Massa in 2014.

Fair point. It is rumoured that Williams are going to get Mercedes junior driver though in George Russell if Stroll departs so whilst Russell is strong in F2, not sure he really is what Williams needs right now. I also don’t quite understand what is happening with Ocon, all rumours seem to point to him going to Renault next year but If Force India does become Mercedes B team, why is the Mercedes contracted driver potentially going off to Renault? Is it just a case of if Lawrence Stroll does buy into Force India that someone has to go as… Read more »

Just keep it out of the hands of Merc. While Sauber and Haas may be with Ferrari, Haas (maybe it ought to be called Dallara) gets a chassie from the later. Sauber seems much more hooked with a driver from the Ferrari Young Driver Camp. (Not sure if they are getting Ferrari Wind Tunnel time though like Haas) Also, there is no doubt that Gene pays for every bit of Ferrari support he gets (though I’m sure he hopefully gets a bulk discount of some sort as I am confident that other than the FIA, Gene is the largest dollar… Read more »