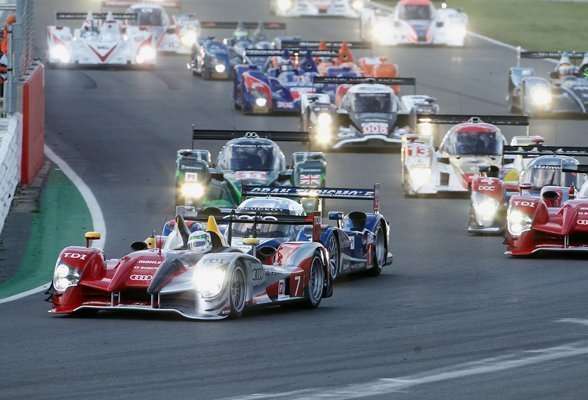 This weekendâ€™s Petit Le Mans will represent the second race in the new Intercontinental Le Mans Cup (ILMC). The 2010 edition of the new world tournament includes three race in 2010 and seven in 2011. The Automobile Club de l’Ouest (ACO) organized the tournament and many of the teams have been very receptive. The challenge, of course, will be for the privateer as global travel and the expense it represents will prevent many teams from participating outside their respective series such as the American Le Mans Series or Europe’s Le Mans series.

One team that is embracing the new tournament is Audi Sport Team Joest. The team will contest the second race in the ILMC here at the Petit Le Mans at Road Atlanta this weekend after facing a defeat in round one at the 1000km at Silverstone by arch rival Peugeot. The German team will bring their R15+ chassis 202 and 203 to the battle and are banking on upgrades that should favor the unique circuit characteristics of Road Atlanta.

Audi have a stellar history at the Petit Le Mans with nine victories in the past ten years. Driver Allan McNish will be returning the scene of the crime that saw Peugeot snatch victory in a rain shortened race last year. He will be joined by veteran drivers Dindo Capello and Mr. Le Mans himself, Tom Kristensen. The sister car with be handled by Marcel Fassler, Andre Lotterer and Benoit Treluyer.

Of the three drivers, Dindo Capello has the most victories at the Petit Le Mans and despite an off Friday morning in practice, heâ€™s looking forward to the event:

â€œI think that this track will suit our R15 plus a bit better. We were always very strong in this race in the past. Thatâ€™s why Iâ€™m confident that weâ€™ll be able to clinch victory for Audi. This race has always been very fortunate for me. I won five times there at seven events. Thatâ€™s another reason why Road Atlanta is one of my favourite tracks.â€

With four wins under his belt at the Petit Le Mans, Allan McNish has unfinished business from 2009 as he spun just prior tot he race being called for rain. We were here last year and it was a deluge. McNish was very quick and seems to expect a good showing this weekend:

â€œI love Petit Le Mans! 100,000 fans in such a compact arena as Road Atlantaâ€“â€“Thatâ€™s simply great. And thereâ€™s hardly a track that suits me as well as this. Itâ€™s very fast and fluid. It demands an aggressive driving style. Every moment is a very intense experienceâ€.

Tom Kristensen hasnâ€™t been to the Petit Le Mans since 2002 and while itâ€™s been a long time, he is Mr. Le Mans. That experience and pace canâ€™t be denied and whil the circuit has changed since he last raced here, Tom is looking forward to it:

â€œItâ€™s been quite a while that I last contested â€˜Petit Le Mans.â€™ Iâ€™m very much looking forward to running there again after such a long time. I know from my two team colleagues that the track has since been resurfaced, which makes it even faster than it was back then.â€

There is no doubt that the #7 car has seriously talented and experienced drivers. It should represent Audiâ€™s best chance at defeating Peugeot this weekend but an interesting twist is that Audiâ€™s #9 car will have three drivers who have never raced at the Petit Le Mans before. Lotterer, Fassler and Treluyer will face ten hour endurance race for the first time but it isnâ€™t their maiden voyage for Audi having helped the marque sweep the 24 Hours of Le Mans earlier this year.

Practice sessions at Petit have revealed an approximate pace gap of 9/10â€™s of a second. Thatâ€™s practice. The real pace of Audi and Peugeot will not be known until qualifying later today but if the speed delta is accurate, there are ten hours of racing that tactically could be Audiâ€™s secret weapon. The build-up tot he race is proving to be exciting and it could represent one of the best Petit Le Mans in recent memory.