Pirelli is introducing a new 18-inch tyre design concept to showcase the way that Formula One could look in the near future. But rather than an abstract design, this is a fully functional tyre, capable of completing demonstration runs around Silverstone during the forthcoming in-season test from next Tuesday to next Wednesday (8-9 July).

The 18-inch tyre is an idea that Pirelli has promoted ever since the company was first announced as Formula One official tyre supplier back in 2010.  Larger wheel and tyre sizes reflect modern market trends; with the adoption of a larger size invariably leading to even greater technology transfer between Formula One tyres and road car tyres.

Pirelli would only progress this initiative if there were a genuine desire from the teams, promoter and other stakeholders to move in such a direction. This is in accordance with the Italian firm’s consistent philosophy of being a technical partner and sponsor entirely at the service of the teams and the sport, in order to benefit the spectacle as a whole.

These tyres, developed and created by Pirelli’s engineers as part of the company’s premium strategy, serve only as an example of what is possible. However, the technology is in place already to produce this type of tyre with the same standards of performance and reliability set by the current 13-inch rubber. Indeed, with a new tyre concept right at the beginning of its development curve, the possibilities are almost limitless. These include even larger sizes in future. 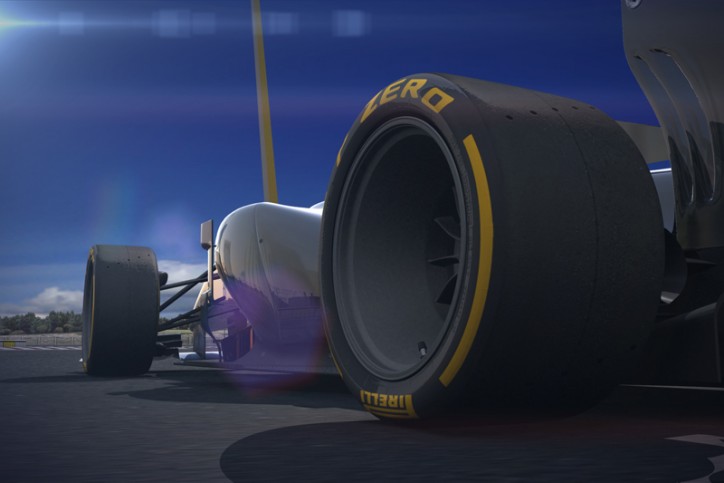 A new 18-inch tyre would not be without its technical challenges to produce, although the pay-off would be increased rigidity through having less flexibility in the sidewalls. Nonetheless, this necessary movement forms an important part of the current Formula One car’s suspension and damping.

A smaller sidewall would also inevitably lead to drastically reduced branding space. In spite of this, Pirelli is completely ready and capable to move ahead with development of such a tyre should the teams wish for it to happen. And proof of this proactive capability lies in the existence of the tyres that will be circulating around Silverstone next week.

Lotus is scheduled to take a 2014 E22 out on the Silverstone Grand Prix track during next week’s test on Wednesday, equipped with one-off Pirelli P Zero 18-inch concept tyres.

“The 13-inch tyre is no longer relevant to the everyday road user, because even an 18-inch tyre is used by standard vehicles these days. While 18-inch tyres would be a big step for Formula One, there are many other motorsport series that already use this size. So there’s scope to go even bigger than that in Formula One in years to come. In order to underline F1’s role as a test bed for future mobility solutions, we believe that it benefits everybody to have as close a link between road car tyres and competition tyres as possible: a belief we have held ever since we introduced the low profile tyre from competition to road use back in the 1970s. However, we’d like to emphasise that this move is not something that we are actively pushing for, as our role in Formula One is not to instigate changes. Instead, it’s to help teams and drivers make the most out of the equipment, regulations and resources they have at their disposal – whatever they decide that framework is going to be.”

Although they are testing the 18-inch tire, Hembery told press at the British Grand Prix that it may not be the tire of choice as a larger tire might be the way to go saying:

“We said many years ago that the larger diameter rims were something we would always go along with, but we have also said we will do what the sport wants – and that is the over-riding factor,” said Pirelli motorsport director Paul Hembery.

“So we thought let’s go with it. It is about aesthetics. Does it make F1 more relevant for road cars and is it a direction the sport wants to take?

“We thought it would be worthwhile to create for the F1 Commission and the Strategy Group, some images of a current F1 car with some 18-inch tyres.

“The 18-inch tyre is one solution – but going forward I think 19-inch or 20-inch tyres are the direction you want to go.”