Pirelli have released the tires compound selection and set quantities for each driver for the Australian Grand Prix. This colorful graphic show that each team have made their selection, per driver, on how many sets of which compound they will bring. 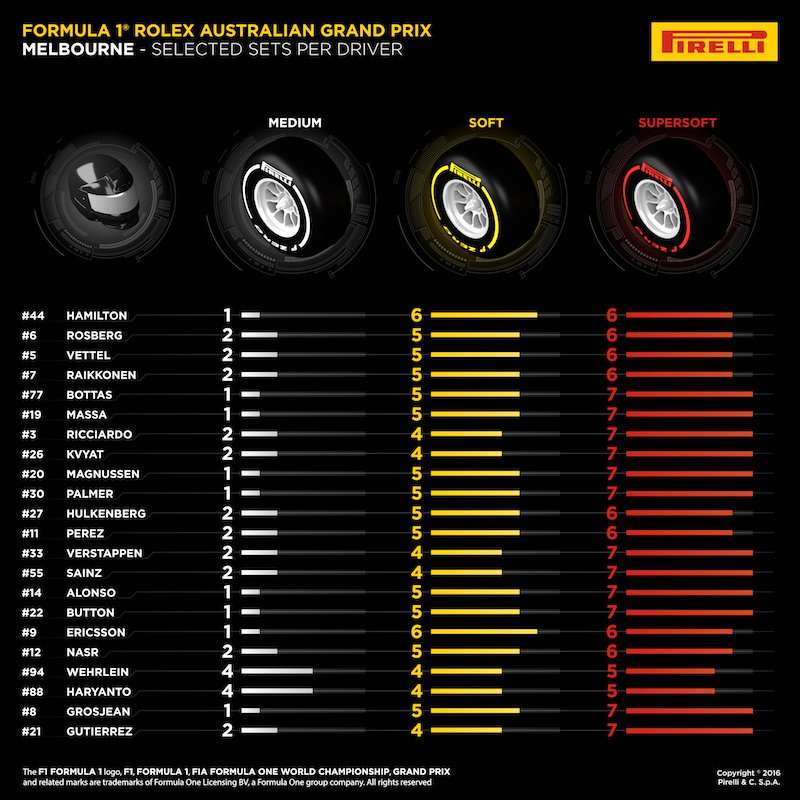 If I am honest, this is a bit confusing as of now but hopefully it will start to reveal patterns and logic over the course of the season when. I am, admittedly, a bit of a dullard when it comes to finding the mental discipline of running tactical and strategic scenarios virtually in my head and trying to determine which lap Bottas might use that 7th set of Super Soft tires and gain him an advantage over Lewis Hamilton who only has six sets and how that will impact the race.

I’m sure tacticians for each team have ran the numbers and determined when they will be used etc but as a fan at home, I am completely in the dark as to what all this means.

If I’m the only human F1 fan that looks at this chart and thinks, “how the heck are they going to convey the tactical importance of this in a live broadcast” then sue me and call me an idiot, I’m fine with that label because as of now, I’ll be damed if I can make a lot of the chart or tactical impact.

Agreed. The first thought I had was, “alright, then how many of each type are reserved for practice/qualifying and how many are actually race sets?”

Yeah, that’s my thought here too. Without knowing what’s been earmarked for what session etc. Then again,maybe that doesn’t matter, it’s just how many they have and choose to use so that adds even a bigger window. I know this is a big deal to tacticians in the team but if the fans aren’t embedded, it’s just not clear to me yet how this plays out. I’m not that smart of a guy to know this sitting on my couch at home and devoid of the strategy the teams have and know. At some level, I know this is fun… Read more »

I hope it does play out in a way where we as fans get brought in on some of the strategic advantages to some of the different choices, but right now I’m right there with Paul from this weeks podcast when it comes to the strategy group and what they actually decide to change.

Me too, if it doesn’t, then it’s lost on all of us as to how cool it may or may not be.

it’s OK, the FIA have an answer:

For that you will need to read Sniffperrol.com

LOL…Richard is a funny guy. :)

Yes. Fan Choice ™! Tweet your choice for what tire each team has to use in Quali 3!

So the drivers have to at least use one set either the Mediums or the Softs during the race. While you always want choices due to varying race conditions, aren’t there big gains to be had using only one type of compound during the race?

There are but it’s not clear how this allocation is going to be used tactically and nor would I expect the teams to reveal that but still, it’s just not impacting me yet as I try to run the permutations in my head as to how this is going to pan out.

How will this work with the extra set of tires for q3? Does it come from the tires that the driver has chosen or from outside those tires? If it’s the former how does pirelli decide which tire to give to the driver? Hopefully it makes Sunday more interesting but at the moment it is confusing

What I haven’t yet seen is Pirelli’s choice of the compound(s) that are mandated for the race. My understanding of the regulations is that they will nominate either one or two of the compounds that must be used in the race. On top of this, I think that all drivers must use at least two compounds during the race. I presume that the extra set of tyres given to those drivers who make it through to the final part of qualifying will be the softest available. Looking at the choices, I would expect the drivers to be planning to use… Read more »

That’s it. If MIE is confused over the regulations, what chance do us mere mortals have to understand what’s going on?

OK, after digging further, the extra tyre used for Q3 is always the softest available, so drivers must have one set unused at the start of Q3. For Melbourne, the mandated race tyres are medium and soft, so drivers must have at least one set of each unused before the start of qualifying. However they only need to use one of these in the race. For races where Pirelli nominate only one compound for use in the race, drivers need to have two sets of that compound available for the start of qualifying. Drivers must return two sets of tyres… Read more »

Wouldn’t it be pretty funny if Pirelli gave them the hardest tires on hand for Q3… If FIA wanted to switch up things and make them unpredictable, that would be a strange way of doing it, also affecting the race if they made them remain on the hardest compound. During Buxton speaking with the Pirelli rep, he only said they need to be handed back, but didn’t specify when. I would only assume it would be immediately following Q3.

So many people with only a single set of mediums. I think those will probably end up as back up tyres rather than an intentional set, given they won’t get much running to plan set ups. Either that or they are a throw away set for Q1 when at least some of the teams expect to coast through. We might see people like Rosberg try them in practice and then Q2 if they still use their best time Q2 tyres in the actual race. The thinking there would be too go long on the first stint to hopefully have track… Read more »

So, how much wood could a woodchuck chuck if Pirelli could chuck wood?

This website uses cookies to improve your experience while you navigate through the website. Out of these, the cookies that are categorized as necessary are stored on your browser as they are essential for the working of basic functionalities of the website. We also use third-party cookies that help us analyze and understand how you use this website. These cookies will be stored in your browser only with your consent. You also have the option to opt-out of these cookies. But opting out of some of these cookies may affect your browsing experience.
Necessary Always Enabled
Necessary cookies are absolutely essential for the website to function properly. This category only includes cookies that ensures basic functionalities and security features of the website. These cookies do not store any personal information.
Non-necessary
Any cookies that may not be particularly necessary for the website to function and is used specifically to collect user personal data via analytics, ads, other embedded contents are termed as non-necessary cookies. It is mandatory to procure user consent prior to running these cookies on your website.
SAVE & ACCEPT
wpDiscuz
18
0
Would love your thoughts, please comment.x
()
x
| Reply
Comment Author Info
Report this comment