Formula 1 is an extreme sport. Not the kind of BMX bike supercross, Stunt aeroplane race or half-pipe lunacy you get on ESPN 8. No, this is the real world where it takes more than rad bike skills to make things happen. It’s a world that is largely foreign to most of us and yet depending on which fuel and oil you use in your car, it may be closer to home than you think.

If you’ve been following my quest to uncover the Shell and Ferrari relationship this year, then you already know how long the two companies have been working together—since the 1930’s.

You know Shell’s technology center in Houston Texas is ripe with enormous brains that never stop innovating and creating better products and why those products make our cars run better.

You know that Ferrari, in Maranello Italy, design and build some of the most iconic cars in the world with engines and transmissions specifically designed with Shell’s products in mind and as part of their design philosophy.

What you may not know is what Shell and Ferrari actually do during a race weekend and how their relationship manifests itself in the world’s most advanced form of racing. We had the opportunity to visit Shell and Ferrari while they worked at the United States Grand Prix in Austin Texas and what we discovered was a ballet of technical innovation, precise detail and outrageous performance. In short, we saw a tangible example of just how critical this partnership is to both companies.

We caught up with Guy Lovett who is Shell’s Technology Manager for Ferrari. Based at the Shell Global Solutions technical laboratory in Chester in the UK, and with regular visits to Ferrari’s Gestione Sportiva in Maranello, Lovett oversees the Shell Technical Partnership with Ferrari to ensure that both organizations’ development programs are fully integrated and move forward seamlessly.

Guy also covers the Ferrari Road Car and the Ferrari Challenge Trofeo Pirelli series. Both before and during his Master’s degree in automotive engineering at Loughborough University in the UK, Lovett was awarded a number of work placements with Shell in the UK and abroad.

Guy is the sort of person who doesn’t need a boss but he has one just the same. His name is Andrew and he gives Guy a run for his money on the ‘nicest people in the paddock’ list.

Prior to this role, he was VP Lubricants Technology since 2005 and previously, he was Vice President Mobility for the Shell Consumer business (2001·2005) after holding the post of Vice President Global Lubricants Marketing (1997). In the early 1990s,
Andrew held positions in Industrial Lubricants and worked in both the Fuels and lubricants global marketing departments.

In this episode of F1B Downshift, you get to hear from both Guy and Andrew about how the trackside lab works and the details of Shell’s products and their relationship with Ferrari. Press the play button—don’t worry, it’s not a Bee Gees song, it’s a real interview.

Shell at the track

Shell Formula One fuel and lubricants are analyzed at races by Shell technicians in the onsite Shell Track Lab and at least three dedicated Shell technical staff attends each race.

During a race weekend, Shell’s technical staff analyzes more than 40 samples of oil from the Ferrari cars and 30 samples of fuel. A gas chromatograph detects contaminants in the fuel and is so sensitive that it can detect contamination equivalent to finding a cup of sugar in Loch Ness. I didn’t ask Guy if he’s found ‘Nessie’ yet but I suspect if any man could, it would be Guy.

The RDE (rotating disc electrode) oil analyzer- which uses a technique called optical emission spectroscopy (OES) – is an extremely sophisticated instrument that detects an increased concentration of wear metals in the oil and warns the team if there is excessive wear. This has actually happened folks, Ferrari have changed a component due to this procedure and the indication of excessive wear that could have been catastrophic in terms of race results.

A partnership like this takes dedication and time. How about spending 21,000 hours per year in research and development within this technical partnership with Ferrari? That’s like two and a half years worth of time spent in one year. The race weekend is no different. The work never stops for both Ferrari and Shell. What does Shell do while Ferrari are trying to win a race? I’m glad you asked…

Wednesday
The Shell Trackside Laboratory packs into a very small volume, maximizing space on the Ferrari engineering trucks for other parts of the team’s kit. Once the trucks have arrived at the track and been precisely positioned, the set-up of the Track Lab can begin. By Wednesday, the Shell scientists will have set up and tested the instruments and prepared everything for the weekend’s work.

Thursday
By Thursday, the cars are prepared and ready to run even though there is no track action. Shell takes samples of the fuel from the cars, the carlotta (the machine used to transfer fuel in and out of the cars in the garage) and the drums. The aim is to ensure that the fuel is still in the prime condition in which it left Chester in the UK and that there has been no contamination. For the oil analyst, the task is to run samples from the car’s engine and gearbox.

Friday
Once the cars are on the track, a fuel sample will be taken from each car or carlotta before it runs, again ensuring that all is in order. After each run, Shell will take an oil sample from the cars and measure the wear metal in the sample, giving Ferrari an in-depth look at the condition of the engine. This is particularly important in the context of the freeze on engine development introduced by the FIA, the sport’s governing body, plus the ongoing ‘two race engine lifespan’ regulation.

Saturday
Tests are run on the fuels and oils throughout the morning, and the samples taken before the qualifying sessions are among the most important. Ferrari needs to be confident that the fuel is in optimum condition for the race and qualifying session. Equally, knowing the results of the oil analysis and the condition of the cars will give the team an indication of how hard it can push the engines during the next two sessions.

Sunday
Once the cars are in Pare Ferme, there is little more the teams can do though Shell can still take fuel and oil samples from them as a final fail-safe. If the FIA decides to sample the fuel in a Ferrari car at the end of the race, as part of its random sampling, Shell also takes a sample to ensure that the results are consistent. And when the cars return from Pare Ferme following the race, the oil is sent back to Shell labs for full analysis- the results of which are shared with Ferrari within days.

All of this culminates in a race weekend that is truly surreal and frantic with process and performance but you don’t get the feeling of hysteria. It’s a well-oiled machine that performs at a level akin to muscle memory. What we get is a Formula 1 team on the cutting edge development at sharp end of the grid. What we get is a product that we can use in our road cars and know that it has been developed in the most punishing of environments. 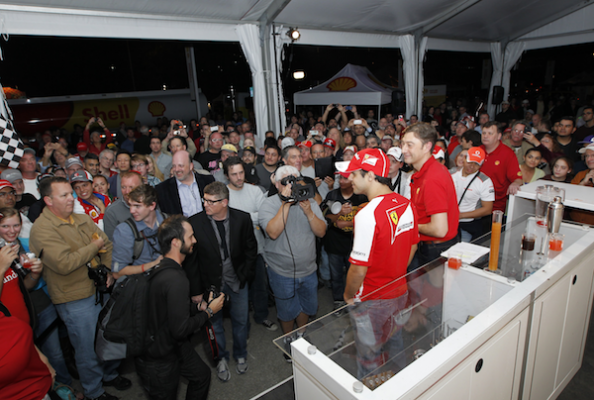 Ferrari’s garage is organized and everything is in its place, including Felipe Massa and Fernando Alonso. The tests, rehearsals and practicing of pit stops are relentless and it’s easy to see why this sport is not only expensive but also the pinnacle of motorsport. I’ve seen the ALMS/WEC up close and while I love that series, Formula 1 is a step above in the eccentricity category. A step above in the spending category as well.

Watching Ferrari and Shell claw performance out of every component and individual was an amazing experience and to be fair, all the teams in Formula 1 are doing their version of the same thing. It isn’t a new concept in motorsport but each organization has its own reason for participating—it’s just that Shell’s reason is universally and tangibly available for all of us to experience and I don’t even have to take Eau Rouge flat to know that.

As I was leaving the hotel on my way to the airport in Austin, I was having a conversation with the cab driver. He told me he was from Budapest. He asked me why I was in Austin. When I told him I came to see how Shell manages a race weekend with Ferrari, he told me he had never been to the Hungarian Grand Prix but he uses Shell fuel.

The Enlightenment of Maurice, Barry and…Me

I explained that I had been working with Shell this year to learn why my car runs better on Shell fuel than any other brand and I suspect we both knew the answer even if we hadn’t gone to a grand prix—having done so, I can honestly say that, like my Hungarian cab driver, I now know why Ferrari and Shell impact my daily life in ways that go beyond racing. Ferrari’s extreme world provides an innovation-rich environment for Shell’s ability to create products that matters—products that perform and products that are relevant. Not only relevant to Ferrari but also relevant to us.

As we headed for the terminal, I couldn’t help but feel somewhat enlightened as I rifled through traffic with a Hungarian driver in a porkpie hat and the strains of the Bee Gees’s Cucumber Castle CD softly wafting from the Kraco 6×9 triaxial speakers in the back. For this enchanted ride, Shell’s relevance most likely stopped at the intake valve I suspect.