Power Unit Use – Update before Austin

As we come towards the end of the season it is definitely time to expect some tactical switching of Power Unit components. The current usage is shown in the FIA report issued today: 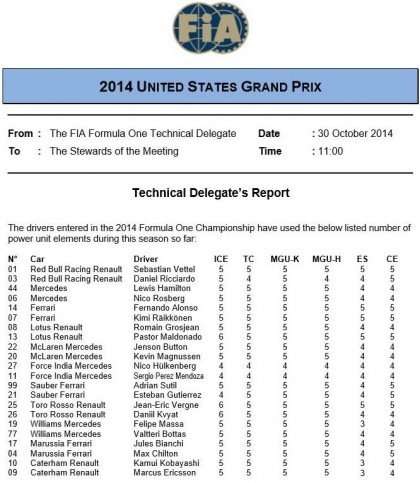 It may be prudent to remind ourselves of the relevant clause in the 2014 Sporting Regulations:

28.4 a) Unless he drives for more than one team (see 28.4(d) below), each driver may use no more than five power units during a Championship season.

A power unit or any of the six components will be deemed to have been used once the car’s timing transponder has shown that it has left the pit lane.   If a grid place penalty is imposed, and the driver’s grid position is such that the full penalty cannot be applied, the remainder of the penalty will be applied at the driver’s next Event. However, no such remaining penalties will be carried forward for more than one Event.

With only 18 cars on the grid, any driver needing to change one or more PU component will need to do it in Austin to ensure that the grid penalty imposed does not roll over to the double points final at Abu Dhabi. The only exception to this would be if a driver could take a complete sixth Power Unit as he would then need to start from the pit-lane (and this could be done at Interlagos without worrying about carrying the penalty across to the final race). The only drivers with the option currently of taking a complete sixth PU are Sebastian Vettel, Fernando Alonso and Kimi Räikkönen. All the others have one or more components on 3, 4 or 6 used to date.

The two components that I don’t think will cause anyone a problem are the CE and ES:

These have been the most reliable of all the components within the PU and the only reason for anyone to need a sixth item is to lessen the effect of the cumulative grid ppenalty by starting from the pit-lane.

The MGU’s haven’t been too much of an issue, but Pastor Maldonado has been on 5 of both MGU-K and MGU-H for quite some time and they may cause him an issue before the end of the season. Both Toro Rosso drivers have also been of 5 MGU-K for a significant period, and may need to change:

While no-one has yet used a sixth TC, both Lotus drivers got through their first four far quicker than anyone else, and they may start to cause them issues before the end of the year:

The ICE is the one component where penalties have already been taken, and it has been discussed in the press that Vettel will need to take a sixth one before the end of the season, and as a result may take a complete PU and sit out qualifying in Austin. However he may not be the only one who needs to make a tactical switch to ensure a fresh ICE for the final double points round:

Both Ferraris have previously arranged to use five of every component (even the more reliable CE and ES) and this gives them the option of a pit-lane start in Austin or Interlagos if they deem it necessary. Whether Ricciardo, Grosjean, Sutil or Gutiérrez fit the new components they need for FP1 to give themselves this option could be interesting. I don’t see it being needed for an Mercedes powered team, but they may also consider the option.

Next season only four Power Units are allowed to last for the proposed twenty races, so the reliability of these components will need to improve with the revisions made over the winter. We have already seen the reliability improve for all manufacturers dramatically from the pre-season testing, so this could be one area where the current three suppliers have an advantage over Honda next year.