Power Unit Use – Update Before Austria

As is usual on the day before free practice starts, the FIA publish the report detailing the Power Unit elements used by each driver to this point in the season.  This is shown below: 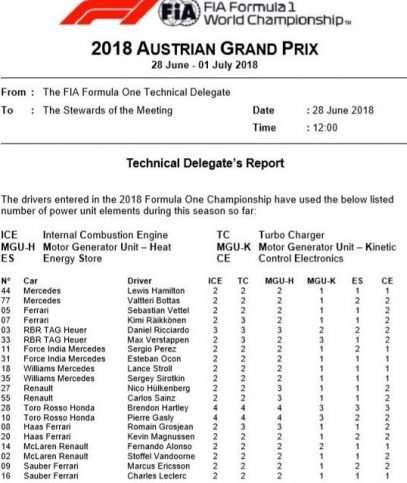 This shows that the Mercedes powered drivers finally got to use their updated Internal Combustion Engine (ICE), Turbo Charger (TC) and Motor Generator Unit – Heat (MGU-H) in the French Grand Prix last weekend.  The rest of the field had fitted their updated units at the Canadian Grand Prix a race earlier.  This was done as Canada has a high proportion of the lap at full throttle, and teams fitted their new elements for race 7 of 21, expecting that they could fit their older lower power units at a circuit with lower power demands like Hungary.  Mercedes chose not to follow this route as dyno testing had highlighted a potential reliability issue, and they preferred to resolve the issue before committing to that design of Power Unit for the next third of the season.

With eight race weekends now complete and thirteen still left in the season, some of the drivers look likely that they will be getting grid penalties for using too many Power Unit elements later in the season.  As a reminder, drivers can use three ICE,TC and MGU-H during the season, but only two Motor Generator Unit – Kinetic (MGU-K), Energy Store (ES) and Control Electronics (CE) before gaining grid penalties.  So each ICE, TC and MGU-H should last for seven complete race weekends, and each MGU-K, ES and CE should last for over ten race weekends.

Drivers who have used three (or for those powered by Honda, four) ICE, TC or MGU-H are very likely to have at least one race impacted by grid penalties, similarly for those drivers who have already used a second MGU-K.  Historically the ES and CE have been the most reliable elements of every manufacturers Power Unit (possibly because they have no moving parts), and these are less likely to be a cause for concern at this stage of the season.

Looking down the list, no Mercedes powered driver is in trouble at this stage, the German manufacturer still having the most reliable Power Unit.

Of the Renault powered drivers it is those in the faster cars who are most in danger:
Daniel Ricciardo is on his final complete Power Unit and any new element will give him a grid penalty (if he needs to fit a single new element, it may be worthwhile taking a complete PU and start from the pit lane to give himself some spare PU elements for future use);
Max Verstappen is on his third TC and MGU-K (which has already given him a grid penalty);
Nico Hülkenberg and Carlos Sainz are both on their third MGU-H;
The McLaren pair have had the best reliability of the French powered cars, with only Fernando Alonso’s use of two MGU-K giving any hint of possible future penalties.

The Honda pair have both also received grid penalties, both have used four ICE, TC and MGU-H and three MGU-K each.  Brendon Hartley has also used three ES and CE, while Pierre Gasly has only required two of each.  It was clear from very early on that Honda were prepared to sacrifice starting positions in some events in order to speed up the development process to improve both power output and reliability.  While further penalties are likely, it is hoped they will result in meaningful gains in power output as well as reliability of the later specification parts.

With most drivers having new parts fitted in the last two race weekends, it is hoped that no penalties will affect the Austrian Grand Prix, but accident damage can lead to teams needing to change parts just to eliminate the possibility of failure in the race, and that may cause an issue for some.