Power Unit Use – Update before Austria

On the Thursday prior to the European Grand Prix, the FIA issued its usual report into the Power Unit elements that had been used to that point in the season: 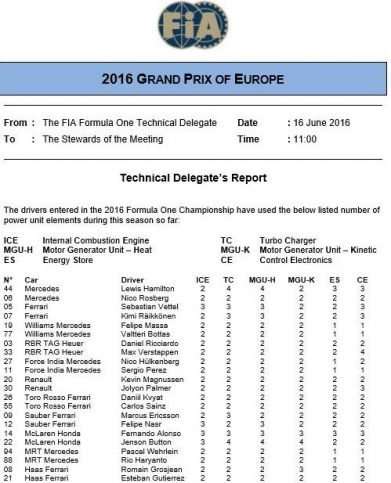 Prior to Free Pracctice starting on the Friday, several drivers had new components fitted, and unusualy for such a demanding track as far as the power unit is concerned, there were no further components fitted prior to the race.

Internal Combustion Engine (ICE) – the following drivers had a new ICE fitted prior to the event starting:

For the first three, this was their third ICE, and with this being only the eighth race of the season it is a little early to be unpacking the third component.  Each component will need to last an average of 4.2 race weekends.  For Button though, this was his fourth engine.  While this sounds really bad, the team did not have time to check the third ICE which was fitted just for a smoky installation lap in Canada, if this proves to be OK then Button will have access to two low mileage ICE (his third and fourth components).  While he is still likely to get a grid penalty for an additional ICE before the end of the year, the real disadvantage he will suffer is if Honda chooses to spend some of their development tokens on the ICE before he is ready to use the fifth component.  He will then either need to take another grid penalty, or run some races with a lower specification ICE than his team mate.  The graph of ICE usage is:

The majority have only used two ICE to this point in the season, which is as expected.  I would predict that the third component would be unwrapped for either Austria (race nine) or Britain (race ten).  In addition to those who took their third ICE in Baku, Fernando Alonso and Sebastian Vettel are out of sequence (both having suffered failures in the early races).

Turbocharger (TC) – Only two drivers used a new turbo for Baku, both Toro Rosso drivers (Daniil Kyvat and Carlos Sainz) fitted their third component.  The graph of TC use looks like this:

Lewis Hamilton and Jenson Button are the drivers who have use four TC to date.  For the Mercedes driver, this was linked to a couple of failures, with the fourth component being fitted in Spain after a redesign of the closely linked MGU-H.  It is unlikely that he will get to the end of the year without needing a sixth TC (and the consequential grid penalty), especially if Mercedes spend some of their development tokens on this component.  For the McLaren driver, the use of the fourth TC in Canada was directly linked to that smoky installation lap, and the pragmatic solution of swapping a complete PU (using a high mileage ICE, but new components elsewhere).  While both of the Honda powered McLaren’s have had failures earlier in the year which will likely see penalties, Button’s real disadvantage will come once Honda start spending more development tokens.

The graph shows that the works Ferrari’s have taken their third TC earlier than ideal, this was because of their wish to upgrade the component.  Their customers for the 2016 PU (Haas and Sauber) are waiting until the British GP (round ten) to introduce the change, as this will minimise their exposure to grid penalties (at the expense of a power deficit to the works team).

Motor Generator Unit – Heat (MGU-H) – this component is closely linked to the TC, and always seems to be changed together.  I do wonder if they are now manufactured as one unit given the extreme high speed (max of 125,000 rpm) and this is why they are always changed together?  As a result, just the Toro Rosso drivers fitted new units at Baku.  The graph looks remarkably similar to the TC as well, with the only difference being in the Sauber drivers.

Jenson Button stands out on four components used, again down to the troubles in Canada, but if this is given the all clear he the MGU-K’s he has left should last for a while, and he should not need his fifth one until Fernando Alonso takes his.  Again the only disadvantage is if development tokens are spent on this component earlier.  Other than the Honda powered drivers, it is just Romain Grosjean who has needed a third MGU-K, which he had fitted in Canada after an early failure of the second component.

Energy Store (ES) – The ES has been one of the more reliable of the PU elements since the 1.6 litre hybrid formula was introduced in 2014.  The following five drivers all had their second ES fitted for Baku:

The ES graph though does indicate that a couple of drivers have had some reliability issues:

Both Lewis Hamilton and Fernando Alonso having used three of these components so far.  Although as these have proved very reliable in the past two seasons, there is no reason to suppose that they would cause either driver to suffer grid penalties.

Control Electroniccs (CE) – the other element that has been remarkably reliable since 2014 is the CE, however for one car in particular this has not proved to be the case in 2016.  Again five drives took a new CE in Baku:

While for four of them it was only their second CE, for Max Verstappen it was the fifth CE, although three of those were used when Daniil Kvyat was driving the car, Verstappen getting a fourth CE on his Red Bull debut in Spain.  The poor reliability of the CE  when fitted to this particular Red Bull makes me wonder if there is something different about that particular chassis that is preventing the CE from being cooled adequately, it hasn’t particularly impacted any of the other Renault (or TAG Heuer) powered cars.  The CE graph is:

A surprising number of drivers have already used three CE, so maybe the reliability of the electronics is being pushed as the ERS is being worked harder as these PUs are developed.  To counter that, Rio Haryanto is still using his original CE (and ES), but then he has completed the lowest distance of any of the Mercedes powered cars this year (5028 km compared to between 5354 km and 5989 km for the other Mercedes powered cars).

You are of course correct. It is Toro Rosso that use the 2015 Ferrari PU. I will change the text.

Sunny, can you explain the term ‘kaf kaf’ ? I haven’t heard it before.

Interesting to see how Mercedes will handle any turbo issues as the season goes on. The amount of penalties potentially in the pipe…could be interesting!

Hamilton’s reliability issues from the early part of the year still have the potential to cause him further loss of points. With the other manufacturers getting closer, it may become harder for him to make his way to the podium from a low start position caused by a grid penalty.