Power Unit Use – Update before Belgium

A long time ago now, on the Thursday before the summer break, the FIA published its usual list of the Power Unit elements used before the German Grand Prix. 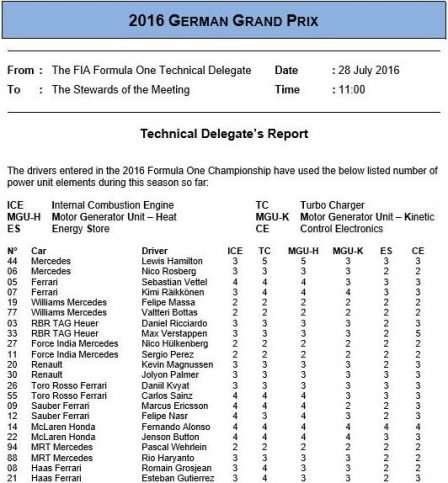 Before first practice on the Friday seven drivers fitted a new ICE, TC, MGU-H and MGU-K.  The Mercedes powered drivers who to that point had only used two of each element:

All fitted a third element of each, this was if anything rather late in the season to use their third components and they certainly should not have any issues with reliability.  Meanwhile the two works Renault drivers:

Used their fourth element of each of the ICE, TC, MGU-H and MGU-K.  This is a little early in the season to be fiting these components, and will require each of these components to last for five races a piece.  Not impossible by any means, but it isn’t an even use of the available components.

At this time five drivers fitted a new ES:

For all bar Hamilton this was their third ES to be used this season, and for Hamilton it was his fourth.  While as for the Renault drivers mentioned earlier it is a little soon for Hamilton to make best used of the available components, he is very likely going to have to take a penalty to get more ICE, TC and MGU-H used, at this point he may as well fit a complete Power Unit on the Friday and again on the Saturday to give him the necessary elements to last to the end of the season.

For Rosberg this was his third CE while for the other two it was their fourth.  The same comments as made above apply, it shouldn’t cause Hamilton any additional penalty, but may prove more awkward for Palmer.

Before Free Practice 3 on the Saturday some more new elements were fitted.  While Romain Grosjean used his third ES and CE, it was Marcus Ericsson fittting his fifth and last penalty free TC which was more significant.  He joins Hamilton and Verstappen as drivers who have used five of at least one Power Unit element, and are therefore almost guaranteed to take a grid penaltybefore the end of this season.

While Renault have stated that they do not expect to have any further updates to their Power Unit this season, the changes that they have made so far have been very effective for the few tokens (11 spent from the 32 available) they have spent.  Ferrari have nearly spent all their tokens (only three left) so may be able to introduce one upgrade before the end of the year.  Honda meanwhile have promised to spend all of their remaining ten tokens in two upgrades (hattip AUTOSPORT) and with both of their drivers having used four ICE, TC, MGU-H and MGU-K (and Alonso foer complete Power Units), there will be penalties for both drivers before the end of the season.  Mercedes have yet to announce whether they intend to use their 11 tokens that they have remaining.  If they do it will need to be introduced early so that Hamilton gets two upgraded PUs and Rosberg will get the updates for his remaining two units.  If it is introduced later, then either Rosberg gets the benefit alone, or Hamilton has to take another penalty.

The only other point to note is that Esteban Ocon takes over the PU allocation from Rio Haryanto.  He is in good shape with three of everything used except ES where only two have been used.

Nice work Dave, as usual. The rules around penalties for additional components gave been changed. I understand that Mercedes can fit the two sets of components on Hamiltons car at Spa, and the maximum penalty that will apply is to start the race from the back of the grid, with no carry over to subsequent races. That sounds like nonsense, to me, the purpose of the grid penalties, and the development token system was to reduce costs, and more imporantly, to create greater parity between the teams, so that the better funded teams couldn’t just spend their way out of… Read more »