The FIA report into the power unit elements used by each driver up until the summer break was published on Thursday, and is shown below: 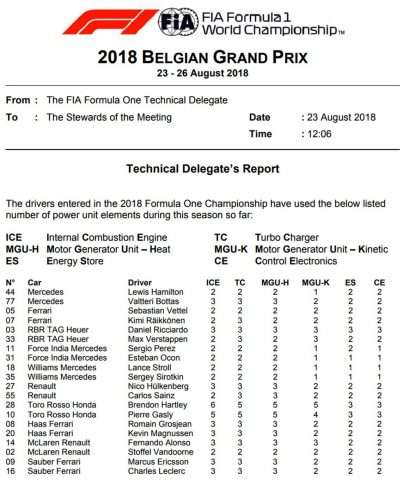 With the allowance for the season being three Internal Combustion Engines (ICE), Turbochargers (TC) and Motor Generator Units – Heat (MGU-H) alongside only two Moto Generator Units – Kinetic (MGU-K), Energy Stores (ES) and Control Electronics (CE), it is clear that most drivers had already used their complete allowance of some or all of the Power Unit elements while a few have already had grid penalties for exceeding the allowance.

Coming into this event it looks as though Ferrari have the upper hand on outright power, but their four customer drivers have already used their complete allocation, and Kimi Räikkönen has used all his available TC.  With this being well past the halfway point of the season, it is expected that most drivers will have used their allowance of MGU-K, ES and CE by this point. 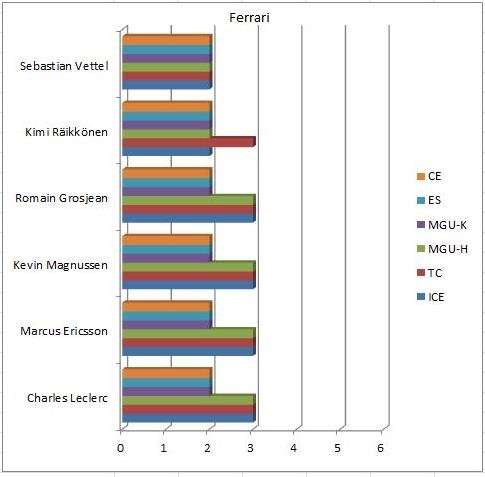 Mercedes have been slightly later than their rivals in introducing their power unit upgrades, and as a result most of their customer drivers have a complete PU left in hand (Sergio Pérez has used both his ES).  It is a different story for the works team though, with Valtteri Bottas having used his complete allowance and Lewis Hamilton fitting a new ES and CE last time out. 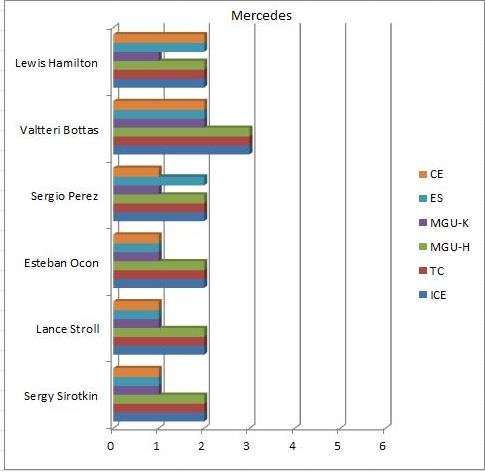 The element usage is far less consistent for the Renault drivers, with the Red Bull pair and Fernando Alonso already receiving penalties, Nico Hülkenberg having used their complete allowance and only Carlos Sainz, Stoffel Vandoorne and Max Verstappen having any new elements left to use penalty free. 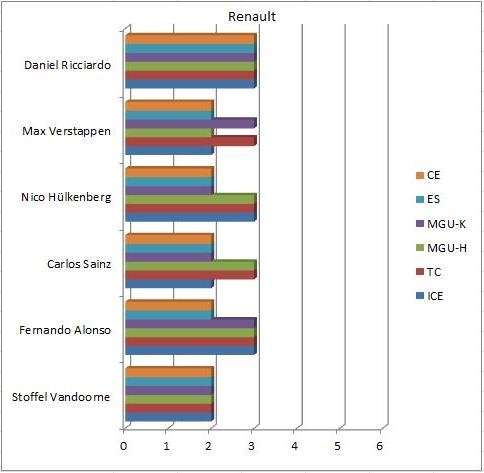 Honda have been throwing updates at Toro Rosso rapidly in order to speed up development, and while this could be said to be working, both drivers are likely to need further elements and further penalties before the season is complete.

With both Spa and next weekend’s race at Monza being dominated by power hungry long straights, it is an advantage for those challenging for the championship to fit updated (or failing that fresh) power units in advance of this race.  Overtaking is at least possible on the long run down the Kemmel straight, so those that have to take penalties will not suffer as much as they would at some other locations.    As a result there were a lot of new elements fitted before Free Practice 1 on Friday.

There were complete new power units for:

For Bottas and Hülkenberg this means they will be starting from the back row of the grid.  The other three Mercedes powered drivers took all the fresh elements that they could without attracting penalties:

After all this, it only leaves two drivers with any elements that they can fit penalty free:

Any other fresh elements fitted will result in penalties.  While for those fitting fresh elements today this may not be an issue, for the others the remaining nine race could prove difficult.

Nico Hulkenberg took a fifth TC on Saturday. As a result he won’t be able to use TC number four for the rest of the season.

Can you talk through how drivers prepare the cars for…