As usual the FIA issued their Technical Delegate’s Report into the power unit elements used prot to the Austrian Grand Prix on the Thursday before the race: 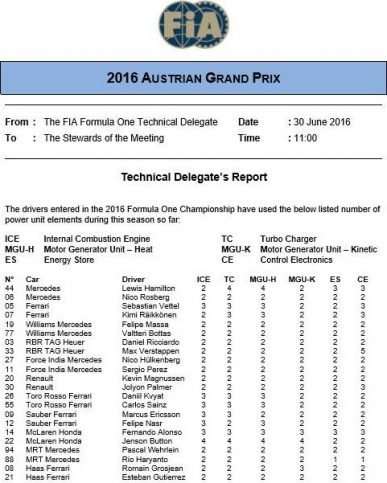 Before the race started, several  drivers used new elements of their power unit allocation and a couple how have used  all of their allocation of some of the elements, so it may not be very many races before grid penalties start to be applied (ten places for the first component of the sixth PU, five places for each subsequent component of the sixth PU, with a maximum penalty of starting at the back of the grid in any one race).

For the Mercedes powered drivers this was a routine change after four or five race weekends with the older unit, and similarly for the works Ferrari drivers (even if Vettel had lost an ICE to failure earlier in the season).  For Erricsson though, this was his second new ICE in as many races, so it is fair to assume that the unit he used in Baku is written off.  The Renault pair are slightly more difficult to read, both Ricciardo and Magnussen took the upgraded ICE in Monaco (a race earlier than planned) as it proved so good in testing following the Spanish GP, however that unit had only been used for three race weekends, and there was no announcement of any further upgrades to warrant putting in a new power unit early.  So do Renault have a reliability issue (we will see this weekend if their team mates need new components).

Turbocharger (TC) – The Mercedes and Renault powered drivers who changed their ICE also fitted a new TC, with the result that these drivers used their third TC for the first time:

While Lewis Hamilton has now used five TC and will surely pick up at least one if not two or three grid penalties for taking a sixth (seventh or even eighth TC) in the remaining 13 races.

Motor Generator Unit – Heat (MGU-H) – As mentioned in the last report, this component tends to be changed with the TC, and so it proved in Austria with  the same set of drivers taking their third (or in Hamilton’s case fifth) new MGU-H.  When Hamilton comes to take his penalty it is therefore likely to be fifteen places, and the team will have to decide whether it is worth cycling through all the other components (ICE, MGU-K, ES and CE) so that he takes a complete sixth Power Unit and starts from the back of the grid, or just takes a sixth  TC and MGU-H and starts at best in sixteenth place.  Which way they decide will probably depend on whether they plan to introduce any upgrades to those components before the end of the season (as once they have been used they cannot be upgraded, and a further penalty will apply before the upgraded part can be raced.

Only the two Renault powered drivers seemed to be changing these components early.

Energy Store (ES) – Only two new ES were fitted in Austria, Rio Haryanto took his second and Jolyon Palmer his third.  No driver has any cause for concern so far with this component.

This is where the other driver who has used five PU elements has an issue, with Max Verstappen on his fifth CE as he has been since it was fitted in Baku.  He may be lucky and run until the end of the year without needing to change it (after all there should be no moving parts), but something seems to be affecting the CE in that particular car, be it heat, vibration, electrical interference or something else, but no other car has had such poor reliability with this component.

In summary, we should get through this next race without penalty, but it may be touch and go if we get to the summer break before trouble hits.

2
Great show as always. Since Haas are having another atrocious ...
1
I just love the idea of Hulk making every angry ...
1
And here’s a counter argument.When Max hit the wall, he ...
1
The sad part is that last year’s Mercedes is still ...
1
Also why does F1 have this rule? The best thing ...

Race Report: Verstappen beats Mercedes…
Aug 9, 2020 by Trever Braun
Seems to me that Max won with tire choice in ...

TPF Podcast Mailbag
Aug 9, 2020 by Pat Goodman
These are questions for Mr. International, aka Paul. Both Lewis ...

Bottas nabs pole over Hamilton…
Aug 8, 2020 by Negative Camber
Me too. Great to see the Hulk back and I ...

Bottas nabs pole over Hamilton…
Aug 8, 2020 by Andrew M Pappas
I just love the idea of Hulk making every angry ...