The FIA issued their customary report showing the Power Unit elements used to date today (the Thursday prior to the British Grand Prix).  This is shown below: 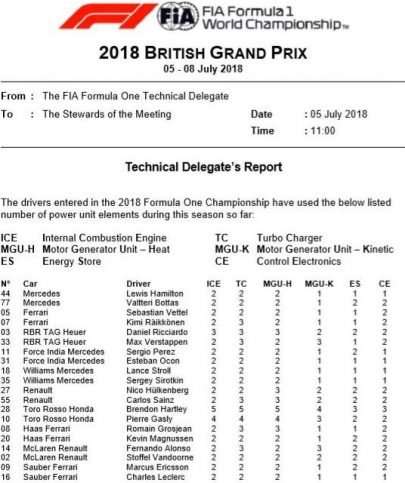 This shows that it was primarily the Renault powered drivers who used new elements last time out, with the new Motor Generator Unit – Kinetic (MGU-K) being available finally from the French manufacturer, the works team drivers and Stoffel Vandoorne took the opportunity to fit their second and final allowable unit for the year.  Red Bull had already needed to use two of these components for each of their drivers, and with the team being competitive here, they elected to stick with what they had rather than take grid penalties.  The decision to fit a new MGU-K to Fernando Alonso’s car was taken later, and prompted his start from the pit lane due to the penalties imposed.

Brendon Hartley needed a new Internal Combustion Engine (ICE), Turbo Charger (TC), Motor Generator Unit – Heat (MGU-H) and Motor Generator Unit – Kinetic (MGU-K) fitted in parc ferme.  As he would be starting from the back of the grid anyway, it is possible that some of these elements were fitted to increase the pool of PU elements available to him for the remainder of the season.

At some point in the next two races (Silverstone or Hockenheim), Daniel Ricciardo is due to take a penalty for a new PU.  This is to avoid the need for a penalty at the following race in Hungary (where the power disadvantage Red Bull feel they have will not be so severe).  With Red Bull normally scoring well at Silverstone, they are planning the change in Germany, but this is reliability dependent.

The other team with some concerns is Mercedes, with AUTOSPORT reporting that the unplanned shut down of both cars following their retirements last time out, may have potentially caused some damage that they won’t know about until the cars run again this weekend.  Since the introduction of this set of power unit regulations, Mercedes have had the best reliability, but that means they are also the least experienced manufacturer when it comes to unplanned shutdown of their power units, and the effects that is likely to have.  With Ricciardo now looking to be out of the drivers’ championship, it is now a two horse race, and with just a point between Sebastian Vettel and Lewis Hamilton hopefully neither will have any grid penalties that influence the outcome of the title.

Thanks for the update Dave, its getting really interesting, as with the exception of Honda, the usage is either nicely on track to make it through the season on the allocated 3 or 2 p.u elements, or they’re teetering on the edge of chaos and numbers of grid penalties. I’m not following closely enough to know which way it could go for each of the teams. I was reading that Vettel’s Ferrari is still using p.u 1 for the free practice sessions, and keeping p.u 2 for quali and the races, whereas Hamilton is using p.u 2 throughout. Have you… Read more »

Ferrari changed to the second ICE, TC and MGU-H a race earlier than Mercedes, so they need to use the original elements to make their allowance last for the season.
Mercedes ran the first power unit for the first seven races, so it is has done the mileage that it needs to do.

I thought all the teams would be running the ‘old’ p.u’s in practice sessions as long as they were still functioning, so they could wind up the power on the second / third p.u a bit higher in quali and the races.

Its sad to say that Honda is on track to equal or best last years un-reliability record (9 and 10 ICE used last year). They aren’t getting the negative press this year possibility because they are not with a high profile team, but it doesn’t look good so far. I’m starting to think the Red Bull to Honda relationship is shaping up to be a Hamilton to Mercedes type of deal. As in, what the hell are they thinking, but I do hope Red Bull are more competitive next year. It’s been nice so far to not know before the… Read more »

There certainly is less hysteria around the Honda p.u this year. They are blazing through the elements, but they seem to be following a planned development programme, are bringing upgrades when they say they will, and the upgrades work. Plus didn’t Gasley get through four race weekends on the same p.u, then replace with an upgrade rather than because of a failure.
They might be on a par with Renault in terms of power and reliability by next season…….

How is it that a standard part (the CE) has such varied usage at this point? How can you even have a penalty when you are using an FIA mandated part? There is no opportunity for the teams to improve the CE. It would be kind a like saying, here’s your power unit, do what you want with it, and oh btw you only get three! I must be missing something on this one… I was thinking crash damage may be the differentiator, but why penalize for that. They don’t do not penalize failing to complete a race on the… Read more »

The Control Electronics is designed by the power unit manufacturer, to control how energy is passed between the two motor generator units and the energy store.
The mandated McLaren supplied ECU controls the ignition timing and fuel for the ICE. It is a different part with a different function.

Well, that makes sense then. Thanks for clearing that up.