Power Unit Use – Update before Canada

On the Wednesday before the Monaco Grand Prix, the FIA report into the number of power unit elelments that the drivers had used was issued: 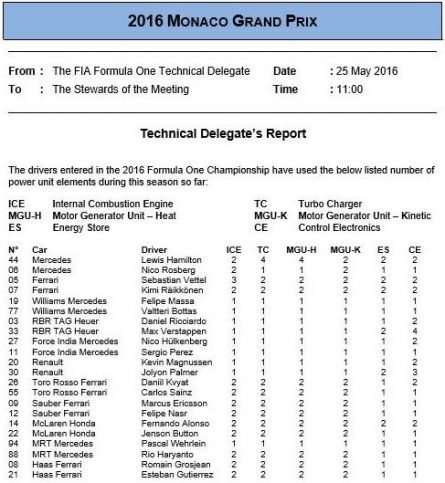 Before the start of free practice on the Thursday, several divers installed new elements.  Despite this not being a power hungry circuit, as the sixth race of the year it made sense for new components to be fitted to some cars (drivers have a maximum of five complete power units to last the 21 races, so each should last between four or five complete race weekends).  Sensibly, teams should plan to introduce updates to their power units when they are due to get new components as they are close to the end of their expected life.  However the pressure of competition has meant that Ferrari introduced their first upgraded ICE early (in Russia), while Honda’s unreliability has meant new components for their drivers, so the upgrade will appear later in the season.  Renault were due to bring their upgraded ICE for all four of their drivers in Canada, but the performance improvement shown in testing in Barcelona meant it was introduced early for one driver from each of their teams (production times not allowing any more parts to be produced in time).

Drivers in really good shape as far as power unit use is concerned are Felipe Massa, Valtteri Bottas, Sergio Perez and Pascal Wehrlein, as they have managed six races on their original power unit.  They should have no difficulty in making the remaining four units last for the fifteen races left. Tellingly they are all using Mercedes power units, which have been the most reliable since the introduction of this 1.6 litre hybrid formula in 2014.  Unfortunately, they driver in the worst shape with regard to power unit use is also a Mercedes driver, Lewis Hamilton, who has used four TC and four MGU-H due to a couple of repeated faults.  Max Verstappen is on his fourth CE (which is unusual as these components along with the ES have been the most reliable over the past couple of years) no one else has used four components so far.  Sebastian Vettel is on his third ICE (and has been since Russia) while Fernando Alonso used his third ICE, third ES and third CE for the first time in Monaco.  Marcus Ericsson used his third TC for the first time in Monaco, while Jolyon Palmer used his third CE for the first time in Spain.  These drivers may have difficulty getting to the end of the season without some grid penalties, as they run out of life on their components towards the end of the season.

With Honda leaving it until the last moment to decide if they will introduce their upgraded power unit in Canada, the token spend so far in developing the power units since 2015 is:
Ferrari 26 spent (6 remaining);
Mercedes 21 spent (11 remaining);
Honda 18 spent (14 remaining);
Renault 11 spent (21 remaining).

The timing of when those tokens are spent could have a big impact on not only the competitiveness of the cars, but whether drivers are subject to penalties in the later part of the season.

The McLaren supplied ECU Isn’t the Control Electronics for the ERS, that is supplied by each power unit manufacturer. The Ferrari reliability looks worse than it may be in reality as they have chosen to upgrade their ICE early, and so have USD components sooner than perhaps they needed to. Honda have certainly improved since last year from a reliability point of view, but they still aren’t good enough to guarantee no penalty. Mercedes seems to have been pushed to the reliability limit to try and stay ahead of the competition, just in time for the rules to relax and… Read more »

Oops, my bad on the ECU vs CE. Casting aspersions on McLaren reliability, what was I thinking????? The p.u development war is getting more interesting. For the first couple of years it looked like Mercedes were pretty much unassailable. This year its looking like Ferrari and Renault/TAG have closed the gap, and are putting Mercedes under real pressure. I hope Honda can make up their deficit soon and we can have a proper power war in 2017. It is amazing that Renault have closed up so much without using many tokens. It looks like what’s good for reliability is also… Read more »

Way back when the 2.4 litre V8’s were frozen, Red Bull complained that there Renault engines were down on power. They were allowed some performance equalization upgrades to bring them in line with the other suppliers. Most of the changes though we’re done to improve reliability (they just had a completely unintended consequence of improving power output…). Red Bull continued to complain about the power deficit, pointing to their poor straight line speed compared to other teams even when they won both titles for four consecutive years. This conveniently forgot about the extra downforce (drag) that the team ran in… Read more »

Yep, I recall the engine development freeze being unfrozen so that Renault could address the ‘reliability’ issues that were making them slower in a straight line.
Your comments reminded me how little credit RBR have ever given Renault for the various engines, hybrids and now p.u’s that somehow JUST failed to hold the brilliant RBR chassis and aero combination back from kicking arse since 2010……
So just why are Renault still supplying RBR with p.u’s???????

On a separate note, Ferrari are due to introduce a TC upgrade, worth 2 tokens in Canada. Whether this means a new MGU-H as well I don’t know. It may just be the works team that gets the parts for this race if previous upgrades are anything to go by.

LOL, So true!
Estate Agents and politicians have more class than RBR.

Honda are following Ferrari’s lead and also introducing a TC upgrade this weekend worth 2 tokens.

Previous article
IndyCar — Full photo galleries from the 100th running of the Indianapolis 500
Next article
Massa at Williams…will he stay or go?